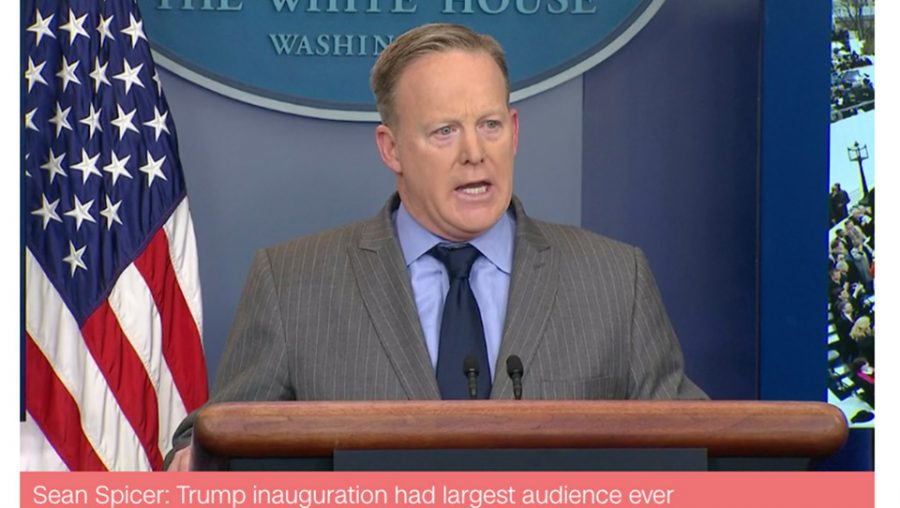 For those who hoped the Trump administration would become more “presidential” after the pomp and ceremony of the swearing-in, the Trump team cleared up any confusion by peddling outright lies from the White House podium.

Trump Travels to Langley as Millions March in Protest

On January 21, the day after his swearing in, Trump traveled to Langley, Virginia. 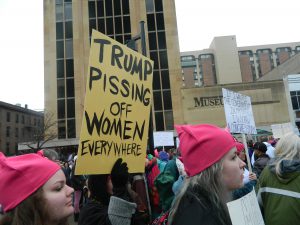 The mission? To mend fences with the CIA. A secondary mission? To give the press something else to report on than the millions of women in pink “pussyhats” gathering in cities and towns across America.

Trump had a lot of mending to do. He had repeatedly slammed U.S. intelligence agencies, casting aspersions on their finding that Russia was behind the hacks on the Democratic National Committee, and comparing intelligence chiefs to “Nazi Germany” when a memo containing allegations that the Russians might be in a position to blackmail Trump hit the media.

As he took to a podium with his back to the wall of stars commemorating CIA agents killed in the line of duty, Trump chose not to speak of history or individual acts of heroism, but of himself.

“Trust me, I’m like a smart person,” Trump told the crowd which may have included an imported cheering section, reports CBS.

Facing a wall emblazoned with the biblical injecture “Ye shall know the truth and the truth shall make you free,” Trump chose a different path. 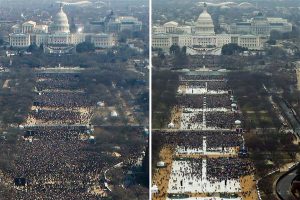 Trump slammed the media as “among the most dishonest people on earth” and stated “like a million, million and a half people” attended his inauguration. By the time he made these statements Saturday morning, images like this one of 2009 vs. 2017 inaugural crowds had been widely circulated by the nation’s major newspapers, including the Washington Post and the New York Times. They clearly show that Trump crowds were much smaller than Obama’s, a fact team Trump should have been prepared for.

Trump also said his dispute with the intelligence agency was “manufactured by the media,” when, in truth, Trump has publicly excoriated the intelligence services most recently comparing them to Nazi Germany in a Tweet.

Trump said he was “hit by a couple of drops” as he began his address on Inauguration Day, but the sky quickly cleared. “And the truth is, it stopped immediately, and then became sunny,” he said. “And I walked off, and it poured after I left. It poured.” According to the New York Times, “it began to rain lightly almost exactly as Mr. Trump began to speak and continued to do so throughout his 18 minute long speech.”

It was a “despicable display of self-aggrandizement in front of CIA’s Memorial Wall of Agency heroes,” said former CIA Director John Brennan through an aide. Another senior former CIA officer characterized to NBC News as a “free-wheeling, narcissistic diatribe.”

His performance at the CIA only “made relations with the intelligence community worse,” one government official told CBS News.

It was downhill from there. Trump’s media team took to the airwaves to defend their boss and each other.

Later in the day, press secretary Sean Spicer called his first White House Press conference. Spicer kept the media waiting for an hour, and came out loaded for bear.

The visibly angry Spicer skewered a Time reporter who mistakenly tweeted that a MLK bust was removed from the Oval Office (an assertion the reporter corrected and apologized for), condemned the media for focusing on crowd size at the inauguration, and issued a series of statements geared toward convincing the media that the crowd was larger than reported.

Spicer began by ripping into the press for publishing photos of Trump’s inauguration that “made it appear” less people were in attendance. White tarp grass coverings “had the affect of highlighting any areas where people were not standing” — a bizarre argument, as even without tarps the parameters of crowds can be easily seen.

Spicer dragged out specific data points to make his case. For instance, he cited official-sounding ridership numbers from WMATA, the D.C. public-transit system. “We know that 420,000 people used D.C. Metro public transit yesterday, which compares to 317,000 that used it for President Obama’s last inaugural.”

This too is false. WMATA officials, told the Washington Post that 570,557 riders used the Metro system between its 4 a.m. opening and its midnight closure on Friday. That contrasts with President Obama’s 2009 and 2013 inaugurations, which saw 1.1 million trips and 782,000 trips respectively.

Spicer was not even close.

Politico’s headline? “Five Untruths in Five Minutes” and Politifact dissected the performance and awarded Spicer the second “Pants on Fire” of his career.

Not an auspicious start for a White House Press Secretary whose key currency is credibility. Spicer capped off this performance by storming out without taking any questions.

#Altfacts quickly became a hashtag on social media, an appropriate accompaniment to the #Altright propaganda peddled by Steve Bannon, formerly of Breitbart News, who is now Trump’s “chief strategist and senior advisor.”

But the “Alt” gave a hip sheen to the ugly business.

NBC’s Todd responded to Conway incredulously, “four of the five facts he uttered were just not true,” and a moment later “alternative facts are not facts, they are falsehoods.”

The Truth About Crowds

On Monday, the Trump team tried to make amends. Spicer kept his cool and had a long press conference answering a wide range of questions.

When asked point-blank by ABC’s Jonathan Karl, “Is it your intention to always tell the truth?” Spicer said “it is.”

But he undercut himself a moment later by saying “but sometimes we can disagree with the facts.”

The facts are these.

Crowd scientists at Manchester Metropolitan University in Britain hired by the New York Times put the Trump inauguration turnout at about 160,000.

This compares to media estimates of 1.9 million for Barack Obama’s 2008 inauguration.

This compares to the 470,000, calculated by the crowd scientists, for the Women’s March on Washington D.C.

This compares to the 3.1 to 4.6 million, tallied by academics in a spreadsheet, of people participating in Women’s Marches across the country.

This compares to the 2.9 million people who delivered the popular vote to Hillary Clinton, the widest margin of any losing presidential candidate.

And it is likely this last number is bedeviling Trump.