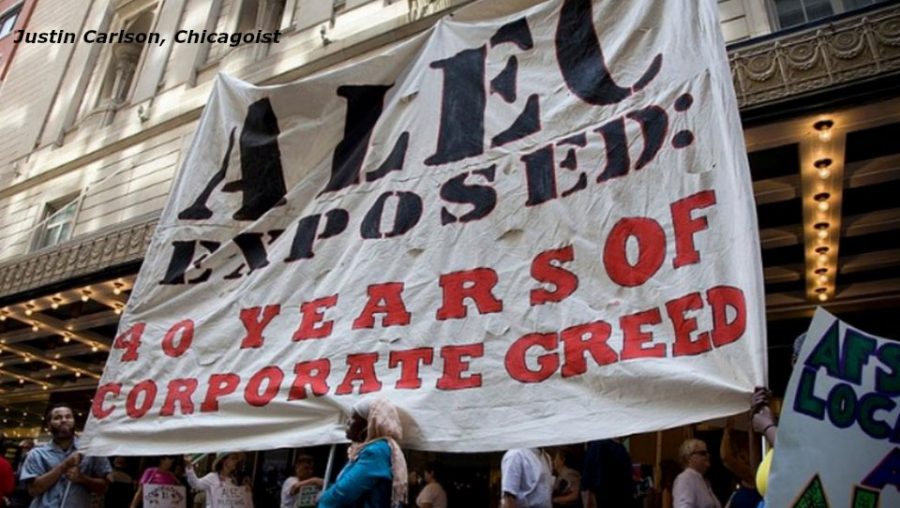 In a year with unprecedented rightwing dominance in state legislative chambers, the American Legislative Exchange Council (ALEC) has continued to wreak havoc in states across the country–despite an ongoing exodus of high-profile corporate members, including BP, Google, and several high-tech firms.

Here are some of the worst policies ALEC legislators tried to push into binding law in state legislatures this year, so far.

ALEC’s corporate sponsors are dominated by major polluters like Koch Industries, ExxonMobil, Peabody Energy, and other coal and oil industry corporations, and ALEC has consistently held workshops promoting climate science denial, as CMD and other organizations have extensively documented on ALECclimatechangedenial.org and as The Guardian, the Washington Post, and other papers have reported.

Even after tech companies like Google and Facebook dropped their membership over the issue, ALEC legislators and special interests have continued to do the dirty energy companies’ dirty business, while trying to spin the media with spurious claims the group has no position on climate change.

Attacks on the EPA: Last June, the federal Environmental Protection Agency took the long-overdue step of limiting carbon dioxide pollution from coal plants. At the behest of its funders, ALEC has been organizing a state-level campaign against these new “Clean Power Plan” pollution rules.

First, ALEC organized legislators to press their state attorneys general into joining litigation backed by the energy industry that challenges the regulations. Then, last December, the ALEC Energy, Environment, and Agriculture task force—whose private sector chair is American Electric Power—adopted a model bill that would create new hurdles for implementing the Clean Power Plan in states, including requiring state legislatures to approve any plan. Legislation reflecting language in this model bill was proposed in more than a dozen states and enacted into law in West Virginia.

Supporting the Keystone XL Pipeline: Arizona and Illinois considered legislation that reflects ALEC’s model resolution in support of the Keystone XL tar sands pipeline, a project of ALEC member and meeting sponsor TransCanada that could have devastating consequences for the ecologically rich boreal forest in Alberta and water sources all along the pipeline’s route.

Assault on Renewables: ALEC and utility industry groups like the Edison Electric Institute are fighting hard to roll back progress on expanding renewable energy. ALEC has promoted bills to repeal state renewable portfolio standards–which require utilities to provide some power from renewable sources–and has pushed legislation designed to increase costs for Americans who have invested in solar panels for their homes and businesses, whom ALEC attempts to label “freeriders.” But public resistance has proven to be a major obstacle to this ALEC legislative priority.

The Kansas legislature, in Charles and David Koch’s home state, replaced its mandatory renewable energy goals with voluntary standards in May, passing a bill that was heavily lobbied for by energy interests, including Koch Industries and David Koch’s Americans for Prosperity. This was something of a “hollow victory,” as the Union of Concerned Scientists points out, because Kansas had already passed the threshold of 20 percent of electricity produced by renewable sources set in the mandate.

In Texas, state Sen. Troy Fraser introduced a bill to cut back state support for renewable energy, but the wind industry and its supporters rallied against the legislation and it failed to pass. Similar bills in Colorado, North Carolina, New Hampshire, and New Mexico also failed to pass.

From minimum wage increases to affordable housing policies to bans on hydraulic fracturing, some of the biggest progressive policy gains in recent years have happened at the local level. In response, ALEC is aggressively pursuing a war on local democracy, pushing “preemption” bills that block cities and counties from enacting ordinances that threaten corporate profits to promote the public good.

As Cara Sullivan, the staff head of ALEC’s Commerce, Insurance, and Economic Development Task Force–which is funded by some of the largest global corporations–explained, “Perhaps the biggest threat comes from the local level… One solution that ALEC has passed is state legislation that preempts the polities from within the state from raising the minimum wage higher than the state level.”

ALEC has long pushed bills like the “Living Wage Preemption Act” that blocks local governments from raising the minimum wage. It was instrumental in the spread of laws in nineteen states blocking local governments from enacting municipal broadband, and it has promoted legislation like the “Preemption of Local Agriculture Laws Act” that prohibit cities and counties from regulating GMOs.

Fracking: In Texas, the legislature enacted a bill sponsored by ALEC national co-chair Rep. Phil King (R) that bans local restrictions on fracking. Residents of Texas cities near the Barnett Shale have grown concerned about the environmental impacts of drilling, including elevated levels of groundwater contaminants, and voters in Denton had enacted a fracking ban with broad support. Rep. King’s bill overturned Denton’s law and blocks other such bans, and similar bills preempting local limitations on fracking have been proposed in New Mexico and Oklahoma. ALEC acknowledged to NPR’s Marketplace in May that it was working on fracking preemption bills.

Paid Sick Days: As paid sick day laws have gained momentum in recent years, with cities from New York to Takoma enacting the measures, ALEC and special interest groups like the National Restaurant Association have tried to eliminate local control over the issue. After ALEC shared Wisconsin Governor Scott Walker’s paid sick day preemption law in 2011, nine other states soon adopted the measures, in most cases with the bills sponsored by ALEC members.

Oklahoma and Alabama enacted paid sick day preemption laws in 2014, and ALEC members in other states are pushing the measures this year. In Pennsylvania, following Philadelphia’s enactment of a paid sick days law in February 2015, ALEC member Sen. John Eichelberger (R) even amended a Senate preemption bill so it would apply retroactively. (Pennsylvania Gov. Tom Wolf (D) is likely to veto the law if passed.)

ALEC has been promoting legislation to privatize public schools since the early 1980s, a goal which is driven not only by the ideological agenda of ALEC funders like the DeVos family of the Amway fortune and Betsy DeVos’ American Federation for Children, but which is also a huge source of profits for ALEC members like K12 Inc., which CMD has highlighted.

Vouchers on steroids: Nevada’s SB 302, introduced by ALEC member and state Sen. Scott Hammond and passed in June 2015, created a vouchers-on-steroids system in which state funding for each student (around $5,100 for most children) is deposited in an Education Savings Account, which can then be used for public schools, private schools, or even homeschooling, with no income limits. The money, which rolls over from year to year, can even be used for college tuition, creating an incentive for parents to skimp on K-12 education. ALEC’s model bill, the Education Savings Account Act, was originally sponsored by the American Federation for Children.

Lifting voucher caps: Governor Scott Walker proposed to eliminate the 1,000-student cap on the statewide voucher program in his 2015-2017 budget and to fund the expansion with money taken from public schools, one of the most radical expansions of school vouchers in the nation. Republicans in the state legislature’s Joint Finance Committee piled on, sneaking ALEC’s “special-needs” voucher program into the budget at the last minute.

Expanding for-profit virtual schools: A 2014 ALEC bill–the “Course Choice Program Act“–would allow high school students in traditional schools to enroll in online courses offered by for-profit virtual schools, rerouting public school funding to the online course provider. Oklahoma Sen. Stanislawski, who serves on ALEC’s Tax and Fiscal Policy Tax Force, introduced a bill that, like ALEC’s, requires the Statewide Virtual Charter Schools Board to publicize a list of available “supplemental” online courses for students enrolled in traditional schools, and authorizes the Board to contract with course providers to negotiate rates for these courses, which school districts pay for. It was signed into law in May 2015.

Inserting Right-Wing Ideology into School Curricula: ALEC’s “Founding Philosophy and Principles Act” requires every student to take a semester-length course on the founding philosophy of the United States, with particular focus on “the limitations on government power to tax and spend and prompt payment of public debt,” “money with intrinsic value” (i.e., the “gold standard”), and other political talking points with little basis in the actual language of the Constitution (which expressly authorizes Congress to incur debt and to print money).

A similar bill passed the North Carolina Senate in April 2015 and is currently before the House; others were proposed in South Carolina and Georgia in March 2015.

But ALEC has not prevailed everywhere. Voucher and charter school bills proposed in several states failed to pass this year. A New Mexico bill introduced by State Rep. James Strickler, a member of ALEC’s Tax and Fiscal Policy Task Force, that tracks ALEC’s Great Schools Tax Credit Program Act, died in the Senate. Rhode Island House Democrats introduced a voucher program, the “Bright Today Scholarship and Open Enrollment Education Act,” but it was held for further study. A Montana bill that would have established public charter schools in the state was passed by the House at the end of March 2015, but died in the Senate. Illinois state Rep. Jeanne Ives’ “Illinois School Choice Program,” essentially a universal state voucher program, has been stuck in committee since March.

ALEC has been fighting unions with its “right to work” policies since at least 1979, and it continues to push bills that reduce the political and earning power of workers in order to increase corporate influence and profits. The decline in wages for the middle class and working familiesdirectly tracks the decline of unionization in America.

Prevailing Wage Repeal: Laws requiring that prevailing wages be paid on public contracting projects, which serve as a backstop against a public contracting “race to the bottom,” have come under attack by ALEC and other special interests including the National Federation of Independent Business, David Koch’s Americans for Prosperity, the non-union contractors’ trade association Associated Builders and Contractors, and state-level right-wing “think tanks” affiliated with the State Policy Network. (See ALEC’s “Prevailing Wage Repeal Act.”)

Several states passed laws weakening or limiting their prevailing wage standards in 2015, including West Virginia, Nevada, Tennessee, Ohio, and Oklahoma. Indiana’s bill, sponsored by ALEC members House Speaker Brian Bosma (R) and Rep. Jerry Torr (R) and passed in April, essentially follows the ALEC model by repealing prevailing wage outright. Michigan’s repeal, which passed the state Senate in May, was named a “top legislative priority” by Senate Majority Leader and ALEC member Arlan Meekhof (R). Wisconsin’s proposed repeal, sponsored by ALEC national board member and former ALEC “legislator of the year” Leah Vukmir (R), is waiting in the wings while ALEC’s allies do a full PR tour. (Vukmir is slated to become ALEC’s legislative board chair later this year, a revolving one-year term in contrast to ALEC’s corporate board members, some of which have served for 20 years, like Koch Industries, Michael Morgan, one of the longest leaders of ALEC in history.)