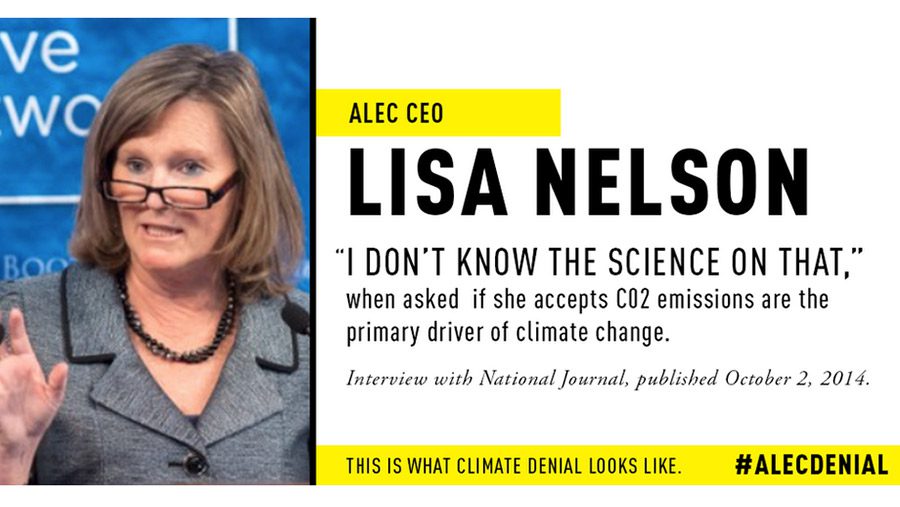 NRECA is a powerful trade association that represents more than 900 independent electric utilities. Its annual spending lobbying Congress regularly exceeds $2 million each year, according to the Center for Responsive Politics. This has included lobbying in support of the controversial Keystone XL pipeline. It’s Political Action Committee gives nearly $3 million per electoral cycle, with the majority going to Republicans.

ALEC is an industry-funded non-profit, founded in 1973, that works to advance the interests of its corporate funders at the state-level. During ALEC conferences, legislators and lobbyists get an equal vote on “model” legislation, which ALEC then promotes to state legislators. Major funders of ALEC include ExxonMobil, Koch Industries and the coal company Peabody Energy.

The ALEC Energy, Environment and Agriculture task force position has been vacant since December 2015, after the previous chair–lobbyist Paul Loeffelman–resigned when his company American Electric Power announced it was ending its funding for ALEC. At least 108 corporations have quit ALEC since the Center for Democracy (CMD) launched the award-winning ALEC Exposed project in 2011.

The Jura appointment appeared on the ALEC website this week, as lobbyists and legislators convene for ALEC’s spring meeting in Pittsburgh, Pennsylvania, which is closed to the public and to the press.

For many years, ALEC has promoted climate change denial to state legislators during its annual conferences. In 2015, CMD co-sponsored a website to highlight the ALEC climate denial: ALECClimateChangeDenial.org.

According to the agenda for the Pittsburgh meeting, lobbyists and legislators will discuss the Clean Power Plan–the EPA rule aimed at cutting greenhouse gas pollution.

As previously reported by CMD, ALEC has been centrally involved in the opposition to the Clean Power Plan for several years, and has promoted numerous items of “model” legislation designed to delay or block its implementation.

NRECA is one of several corporate funders of ALEC currently engaged in litigation against the Clean Power Plan. The rule is currently on hold after the U.S. Supreme Court granted an industry supported request to freeze the plan, pending a review by a lower court.

Nick Surgey contributed to this article.