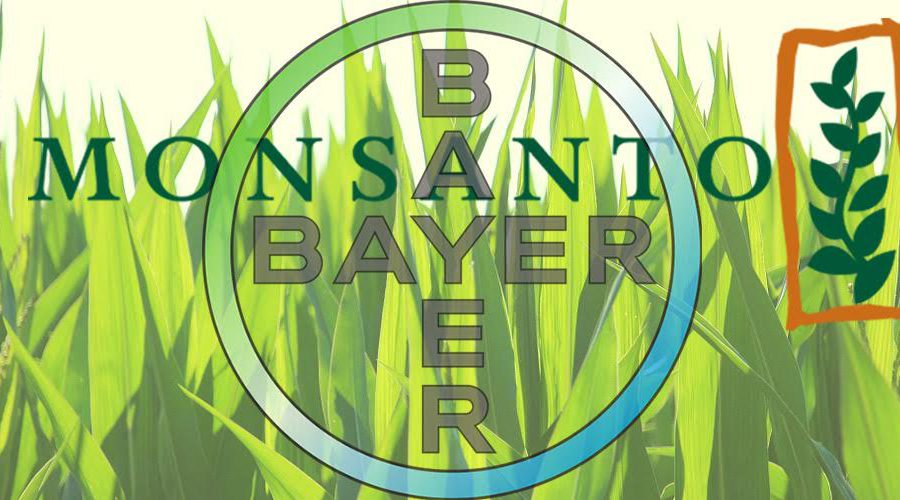 Bayer announced this month that it plans to purchase Monsanto, the controversial chemical corporation that has been sued around the world over its products. Nowadays, Bayer has a more consumer-friendly corporate reputation, but has a checkered past too. (Bayer’s history as a German company during the Nazi era is well documented.)

According to Vox, if regulators approve the $66 billion deal, the merger would create the largest agribusiness giant in the world, “selling 29 percent of the world’s seeds and 24 percent of its pesticides.”

Selling nearly a third of the world’s seeds actually means owning a huge portion of the seed stock on the planet. And, Monsanto has spent decades genetically modifying seeds to make them compatible with its chemical pesticides and herbicides, as with Roundup-ready corn. Those are the kinds of chemicals and modifications that can’t be washed off.

In the U.S., citizens have been waging major campaigns to try to get GMO products labeled and/or to prevent the use of GMO crops in their communities. These efforts have been attacked by Monsanto and other chemical corporations, which have worked to defeat citizen democracy through subterfuge—as with the deceptive ads that beat back California’s proposition on GMO labeling and with a “preemption” bill in Oregon to trump local ballot measures that passed overwhelmingly in two Oregon counties that banned GMO crops.

That preemption bill was similar to other anti-local democracy measures peddled by the American Legislative Exchange Council (ALEC).

From fracking bans to minimum wage and GMO labeling, ALEC and its politicians have successfully driven preemption efforts with its “model” legislation throughout different parts of the country at the behest of giant corporations.

An Oregonian who leads a group with ties to Monsanto claimed he authored the bill, but as Lisa Arkin of the Pesticide Action Network North America noted both the Oregon bill and the ALEC bill share the same name and have the same core operative language and effect: “A local government may not enact or enforce a . . . measure, including but not limited to an ordinance, regulation, control area, or quarantine, to inhibit or prevent the production or use of agricultural seed, flower seed . . . or vegetable seed or products of agricultural seed, flower seed . . . or vegetable seed.”

After the Oregon bill was introduced in 2013, it was taken to ALEC’s 40th anniversary meeting in Chicago, as the “Preemption of Local Agricultural Laws Act,” which is known as the “Monsanto Protection Act,” by its foes.

At the Agriculture Subcommittee meeting of ALEC’s Energy, Environment, and Agriculture Task Force–which was co-chaired by “CropLife America,” a trade group for the industry–corporate lobbyists and politicians voted to make that bill a new ALEC “model” to push across the country. It also passed to become binding law in Oregon, as CMD’s Rebekah Wilce documented this in her June 2014 story, “Oregon’s GMO Sellout.” As she wrote in a story published by The Progressive magazine:

“All six of the world’s biggest pesticide and GMO companies—BASF, Bayer, Dow, DuPont, Monsanto, and Syngenta—donated $455,000 to the effort to overturn the ballot initiative….[I]t was “more than eight times more” than any other county ballot measure has ever received…. [Oregon’s Willamette Valley grows a] majority of the sugar beet seed for the country, and as of 2010, 95 percent of sugar beets grown in the United States are GMOs engineered to be resistant to heavy applications of Monsanto’s Roundup glyphosate…. [So local citizens] filed an initiative that ‘establishes certain rights to a local food system while banning GMO agriculture,’ according to attorney Ann Kneeland…. The initiative, she says, would ‘prevent corporations from eviscerating local law-making.’ Their commercial rights should not trump ‘the community’s right to protect residents’ health, safety, and welfare,’ she says. [But] not every state has bowed to Monsanto and GMOs. In April [2014], Vermont passed a law requiring the labeling of GMOs. It marked a huge victory….”

The connection to ALEC in all this is perhaps unsurprising given that both Monsanto and Bayer have been financial supporters of ALEC over the years, with Monsanto providing major funding and Bayer sending more than a half-dozen lobbyists to ALEC meetings to advance its legislative agenda among pliable ALEC politicians.

Monsanto is a known funder of ALEC and Bayer previously sat on ALEC’s corporate “Private Enterprise” Board, where the company’s VP of Public Policy and State Government Affairs served as Treasurer. Bayer has also been listed as the ALEC State corporate co-chair of Massachusetts, Nevada, Pennsylvania, South Dakota, and Texas.

Also, as CMD reported in 2013 that Monsanto along with several other companies and trade groups spent more than $50,000 in the span of fourth months, as legislators considered bills to override various county laws in Hawaii that banned GMO’s and required disclosure of pesticide use and GMO crops.

In another attempt to buy influence in Hawaii, Bayer and Monsanto along with other big agricultural corporations, associated trade groups, and their lobbyists and employees contributed more than $700,000 to state and county candidates in Hawaii from November 2006 through December 2013.

Monsanto and Bayer’s Troubling Past

Since 1993, CMD has closely tracked the propaganda campaigns funded by Monsanto. In 1995, CMD’s founder John Stauber and Sheldon Rampton published Toxic Sludge is Good for You, which provides an in-depth overview on how corporations, including Monsanto, team up with the public relations industry to mislead the public for corporate profits.

Monsanto manufactured the majority of the world’s polychlorinated biphenyls (PCBs)—a dangerous chemical known for its numerous health effects—until Congress banned the product in 1976. Among the many controversial products Monsanto has marketed since then are Dichlorodiphenyltrichloroethane (DDT), Recombinant Bovine Growth Hormone (rBGH), and Aspartame (an artificial sweetener).

(Monsanto got the increasingly controversial sweetener from the G.D. Searle corporation, which was led by Donald Rumsfeld in the 1980s before he became the head of ALEC, for a time. The Searle family fortune resulting from its products and selling off the company has been transmuted into a foundation that helps fuel the ALEC agenda, including major grants to ALEC’s sister organization, the State Policy Network, and its affiliates in the states, which claim to be think tanks but which were designed to peddle the rightwing agenda of select corporations in state legislatures and state press.)

Monsanto also produced Agent Orange (known as Herbicide Orange), which was contaminated by an extremely toxic dioxin compound (2,3,7,8-Tetrachlorodibenzodioxin, or TCDD). In the 1960’s and early 1970’s , Monsanto manufactured the product for the U.S. military as part of its herbicidal warfare program during the Vietnam War from 1961 to 1971. As a result, millions of Vietnam citizens suffered from health problems and disabilities.

Today, Monsanto is more widely known for its weed killer Roundup and its efforts to modify human food crops, like corn, to tolerate massive quantities of that herbicide. As a result, Monsanto has poured numerous resources into blocking GMO regulation at both the federal and state level.

Those regulations are very popular with consumers but loathed by Monsanto. As retired Environmental Protection Agency scientist Ray Seidler has said: “Genetically engineered food affects more than the bottom lines of the agriculture industry. The majority of genetically modified food is altered in a lab to increase tolerance to huge quantities of herbicides, or to produce its own pesticides that cannot be washed off. The public has a right to know whether or not they are participating in the degradation of our natural environment.”

But Monsanto was unable to use its financial resources to get a bipartisan group of legislators and a Democratic governor to help it block citizens’ rights in Oregon.

And while Bayer’s positive reputation has risen in the United States, the company has a troubling past. Bayer’s parent company IG Farben profited from producing Zyklon B—the deadly gas in Nazi gas chambers in Auschwitz used to kill millions.

More recently, several lawsuits have been filed against Bayer for downplaying apparent side effects—including stroke, cardiac arrest, blood clots and gallbladder problems— for its contraceptive products Yasmin and Yaz.

If Bayer’s purchase of Monsanto passes regulatory antitrust scrutiny, activists will have contend with an even bigger foe that dominates huge portions of the pharmaceutical and chemical business with lobbying arms that are even more coordinated than before.