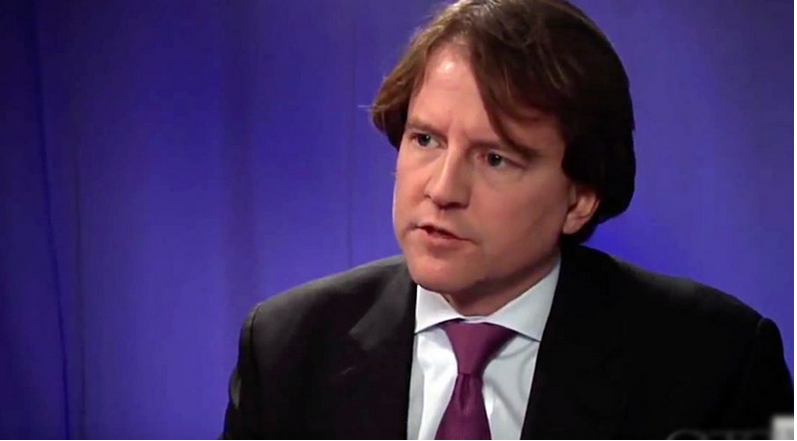 McGahn was ethics lawyer to scandal-ridden Rep. Tom DeLay, played a lead role in transforming the FEC into a toothless watchdog, and has represented the Koch Brothers’ Freedom Partners and its PAC, which bankroll a large network of right-wing groups and political campaigns.

A prominent Republican campaign finance attorney, McGahn has been a controversial figure for more than a decade, and is notorious for politicizing and crippling enforcement of federal campaign finance laws while serving as a GOP-selected FEC commissioner from 2009-2013.

McGahn’s embrace of dubious campaign finance and ethics practices as counsel to Rep. Tom Delay and the National Republican Campaign Committee–combined with his disdain for laws enacted by Congress–raise serious concerns about what advice he is providing Trump and his transition team. Trump’s recent decisions to meet with investors and to sidestep creating a truly blind trust mix business and politics in ways that present serious conflicts of interest and raise the specter of Trump cashing in on the presidency.

McGahn and the Tom DeLay Scandals

McGahn served as counsel and ethics advisor to Rep. Tom DeLay in the early 2000s, at a time that DeLay was in the thick of numerous ethics and campaign finance scandals.

As House Majority Whip, DeLay led an aggressive campaign to push through a mid-decade redistricting plan for Texas in 2003 that allowed Republicans to capture a majority of Texas U.S. House seats in the 2004 elections for the first time since Reconstruction.

DeLay organized a political action committee, Texans for a Republican Majority (TRMPAC), and in 2005 was indicted for conspiring to launder corporate cash into campaign contributions to the PAC to help Republicans win a majority in the state legislature in the 2002 elections. DeLay was found guilty by a jury and sentenced to three years in prison. DeLay’s conviction was overturned in 2013 by the state Court of Appeals in a 2-1 decision that split along party lines.

As DeLay’s lawyer, McGahn defended the scheme. “[M]oney gets transferred all the time. This was disclosed to the extent required to be disclosed by applicable law. It just shows that donors don’t control funds once they’re given.”

DeLay was also admonished by the House Ethics Committee for improperly seeking to have the FBI arrest Democratic members of the Texas legislature who fled to Oklahoma to block passage of DeLay’s redistricting plan, and for seeking FAA assistance in tracking the legislators down.

An FEC audit in 2005 also found that DeLay’s ARMPAC (Americans for a Republican Majority), under McGahn’s legal watch, improperly spent more than $200,000 in soft money and failed to report another $300,000 owed to vendors in the 2002 elections. McGahn dismissed the violations as technicalities.

During the same period, DeLay was investigated by the Justice Department for allegedly accepting trips, gifts, and political donations from Jack Abramoff in exchange for providing legislative favors to Abramoff’s clients. Two of DeLay’s political aides, as well as Abramoff, pled guilty to related charges in 2006, but DeLay escaped indictment. Nonetheless, media exposés at the time documented DeLay’s corruption in connection with blocking labor laws for the North Mariana Island, providing favors for donors to DeLay’s ARMPAC, and cutting deals concerning tribal casinos.

One of the scandals surrounding DeLay involved a 1997 trip he made to Moscow, where he was joined by Abramoff, paid for by conservative nonprofit, the National Center for Public Policy Research. The group also financed two trips to Moscow by DeLay’s chief of staff, Edwin Buckham, who went on to become a corporate lobbyist.

The trips were organized by prominent Russian businessmen who, joined by the Russian government, were mounting a major lobbying effort for increased foreign aid. In 1998, “DeLay voted for a bill that included the replenishment of billions of dollars in IMF funds used to bail out the Russian economy.”

According to associates of Buckham, Russian oil and gas executives subsequently gave $1 million to the U.S. Family Network, a conservative advocacy group founded by Buckham in 1996. The Network was part of DeLay’s “political money carousel,” and later received $500,000 from the National Republican Campaign Committee, where McGahn was also in-house counsel. The group was named in a RICO lawsuit against DeLay filed by the Democratic Congressional Campaign Committee in 1998.

McGahn defended the huge contribution and denied that it had any ties to Russia when Public Campaign ran political ads in 2006 attacking DeLay for the scandal.

McGahn served as in-house counsel to the NRCC from 1999 to 2008, during which time the political committee was roiled by scandal. Between 2000 and 2008, the NRCC raised and spent $630 million with little or no oversight. Under McGahn’s tenure, the committee waived its rules concerning expenditures over $10,000, eliminated a ban on committee staff earning income from outside corporations, and borrowed $9 million from Wachovia. Finally, Rep. Mike Conaway (R-TX) demanded an internal audit, and revelations of falsified reports spurred an FBI investigation. The NRCC’s treasurer admitted forging audit reports and was ultimately convicted of embezzlement.

McGahn also oversaw an NRCC scheme in 2002 to circumvent the McCain-Feingold soft money ban by transferring $1 million to the Leadership Forum, a front group set up by House Republican leaders. An FEC complaint was filed, and the money was returned.

McGahn’s Role in Stalling Enforcement by the Federal Elections Commission

President George W. Bush appointed McGahn to the FEC in 2008 over the strenuous objections of the reform community.

As an FEC commissioner, McGahn played a major role in opening the floodgates to political spending, taking controversial positions at odds with laws as passed by Congress, particularly the BCRA (Bipartisan Campaign Reform Act, known as McCain-Feingold), which reined in soft money spending by the parties.

As Craig Holman, a campaign finance and ethics expert at Public Citizen, put it: “McGahn’s role was to bring the FEC into dysfunction so that the campaign finance laws could easily be sidestepped.”

In 2011, McGahn stated that “I’m not enforcing the law as Congress passed it. I plead guilty as charged.” A letter from reform groups calling on Congress to investigate the FEC’s dysfunction countered that:

FEC Commissioners may not simply refuse to enforce laws based on their disagreement with the laws, or their predictions of how a court might rule if a law were challenged. It is unacceptable that the only agency charged with enforcing campaign financing rules on our nation’s highest elected officials is largely AWOL.

McGahn ushered in an era of agency gridlock, where Republican nominees to the FEC effectively eliminated enforcement of campaign finance laws by deadlocking on an unprecedented number of commission votes, including routine matters and cases where in-house counsel recommended penalties.

FEC Commissioner Ellen Weintraub was sharply critical of McGahn’s performance at the FEC, saying, “He was consequential like a sledgehammer was consequential. He did his best to undermine the law.”

McGahn testified on behalf of Freedom Partners Chamber of Commerce and Freedom Partners Action Fund at an FEC hearing on rulemaking in light of the Supreme Court’s decision to strike down aggregate contribution limits in McCutcheon v. FEC.

Freedom Partners Action Fund began making payments to Jones Day in July 2014, a month after McGahn joined the law firm as a partner, according to FEC reports. The PAC paid McGahn’s firm $130,822 in 2014, and has continued making smaller payments in 2015 and 2016.

Freedom Partners is closely tied to Charles and David Koch, and has been referred to as “the Koch Brothers secret bank.” Freedom Partners spent more than $25 million on five U.S. Senate races in the 2016 elections.

Either McGahn is giving bad advice that Trump can do as he pleases, or Trump isn’t listening. Over the past few days, Trump has mixed business and politics in shocking ways, holding meetings with business partners from India and Argentina about developments branded with the president-elect’s name in the midst of accepting visits from foreign dignitaries and selecting his cabinet.

Those scenes are all too reminiscent of DeLay’s fast-and-loose dealings, when the congressman faced pay-to-play allegations involving Jack Abramoff and Russian oil executives while being defended by McGahn.

Given McGahn’s past performance, and Trump’s flouting of the post-Watergate ethical norms followed by presidents for the past 40 years, the incoming administration may well be ensnared in serious ethics scandals of its own making by the time Trump is sworn in.

This story was originally published on 11/22/16, but it has been updated to reflect the announcement on 11/26/16 that Trump has named McGahn to be White House Counsel.