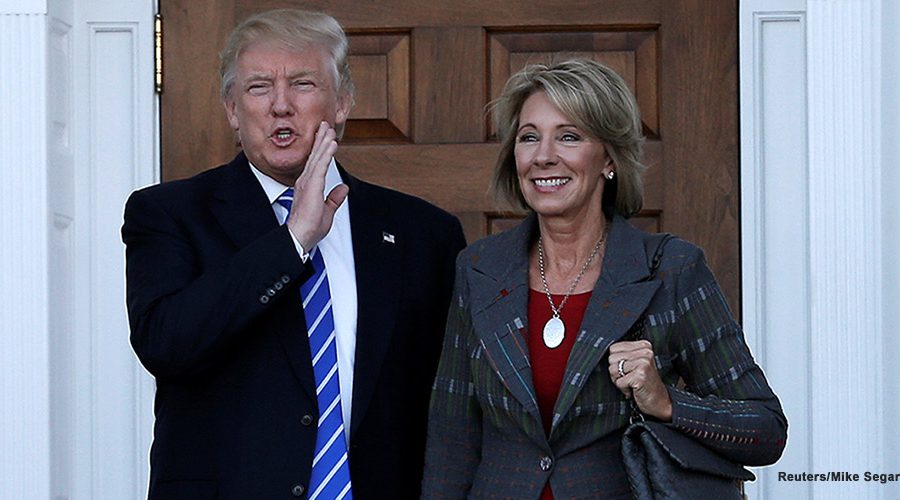 CMD transcribed audio of Betsy DeVos’ speech at the James Madison Center for Free Speech (JMCFS) Awards Banquet on July 10, 2002. DeVos helped lead JMCFS as a board member of the group, which has attacked numerous campaign finance laws designed to prevent corruption. The video of her remarks, which were broadcast by C-SPAN, is available here.

At the event, DeVos presented then-House Majority Whip Tom DeLay with JMCFS’ “Defender of Freedom Award” for his efforts to thwart the campaign finance reforms that became the McCain-Feingold Bipartisan Campaign Reform Act, which Citizens United struck down in part. She praised DeLay’s honesty as part of her remarks.

JMCFS was founded by right-wing Senator Mitch McConnell in 1997 to challenge clean election laws at the state and federal level–in the aftermath of growing concerns about special interest groups distorting elections, including a Senate investigation into the Kochs’ first major foray into dark money operations called “Triad.”

JMCFS’s general counsel is James Bopp, who was later central to the 2010 Supreme Court decision in Citizen United, which unleashed massive amounts of dark money into elections from billionaires like DeVos and the Kochs.

According to C-SPAN the following people spoke at the banquet (titles as provided by C-SPAN):

Notable Scandals, aside from later controversy over DeVos. Betsy DeVos was introduced by longtime Ronald Reagan associate Edwin Meese. Meese was the Attorney General in the Reagan administration from 1985 to 1988 before resigning after independent prosecutor James McKay concluded a 14-month investigation into his conduct. No charges were filed against Meese, but the independent counsel referred certain matters on his ethical behavior to the Justice Department for review. According to the New York Times, McKay’s report suggested that Meese “probably violated Federal conflict-of-interest laws”, but declined to seek charges regarding “two matters that had long been the focus of his investigation: the Attorney General’s involvement in a $1 billion Iraqi pipeline project and his ties to the Wedtech Corporation, a Bronx military contractor.” Meese maintained his innocence following the report.

Tom DeLay, whom DeVos describes as straightforward and the most honest man in DC in this July 2002 speech, resigned from Congress in 2006 embroiled in controversy. In 2005, DeLay was charged with money laundering and conspiracy to engage in money laundering during the 2002 elections. In 2010 DeLay was found guilty of both charges by a Texas jury and was later sentenced to three years prison and 10 years probation. Upon appeal DeLay’s convictions were overturned in 2013. Prior to this scandal, DeLay settled a lawsuit brought by his former business partner in 1999. The suit alleged that the former Congressman spent company money on political campaigns, after the suit was settled it was discovered that DeLay likely committed perjury, which he has denied.

In addition to campaign finance violations, DeLay’s close ties to the lobbying industry led to a host of other controversies. In 2005 the Washington Post reported that the U.S. Family Network, an advocacy group with close ties to DeLay, was “funded almost entirely by corporations linked to Jack Abramoff,” including $1 million from Russian oil and gas executives looking to influence DeLay’s vote on legislation regarding the IMF’s bailout of the Russian economy. DeLay was central to the Jack Abramoff lobbying scandal, which was exposed in 2005. In 1999 DeLay was rebuked by the House Ethics Committee after pulling an intellectual property bill from the floor when the Electronics Industries Alliance hired a Democrat. The move was part of the broader “K Street Project,” a pay-to-play operation launched by DeLay and Rick Santorum in order to punish and ostracize lobbying firms that hired Democrats.

Here is the transcript of the event that pertains directly to DeVos:

Edwin Meese: To present our next award we have a great leader from the state of Michigan, Betsy DeVos of course has been introduced already as our co-chairman of this dinner tonight.

Betsy DeVos (begins at 52:45): Thank you very much Mr. Meese, and Dick and I are really very honored to be able to participate in this evening and I feel very privileged to have an opportunity to present an award to the Majority Whip this evening, almost Leader (laughter).

I realize that inside Washington Tom DeLay is known by many names, some of which would probably not be appropriate to mention here tonight. In the halls of Congress he is of course known as ‘The Hammer,’ ‘The Whip,’ ‘a grand strategist,’ ‘the man to see,’ and so on and so forth. And I have no doubt that all of this is true and many of you are more knowledgeable about all of that than am I. But I’d like to add another perspective for you this evening introducing Tom.

Let me give you the view from outside of the beltway, from those of us who live in the ‘real world,’ in my case the Midwest. Let me tell you what Tom DeLay means to us. We see Tom as the guy who, unlike too many in Washington, says what he means and means what he says. We see Tom as a guy who is straight-forward and honest. A guy who says ‘damn the torpedoes, full speed ahead.’ We see Tom as the rare politician who when he speaks you don’t get the feeling that every word he says has been focus grouped or poll-tested. We see Tom as a true leader, and most importantly as a man with the courage of his convictions.

Now all of that is wonderful, but having the courage of your convictions is not worth much if you don’t have the right convictions. The reason we’re honoring Tom here tonight is that he is unapologetic in his defense of our freedoms and our very way of life here in America. Tom simply has a keen sense of, and a very great appreciation for American Values. And one of the most fundamental American Values is our freedom of speech and our freedom to speak out in the political process and to do so as vigorously and loudly as we please. In his relentless defense of these freedoms, Tom is in a league of his own in his ability to refuse to be cow-towed by the editorial pages. In fact, in my way of thinking, this is one of his greatest qualities. The ability to pursue what is right without fear and without hesitation. So, I am very honored and pleased to present this award to the Majority Whip, a true defender of freedom and my friend, Tom DeLay.”

Tom DeLay: “You can’t thank the DeVos’s enough for what they do for America. These are people who truly believe in what we all believe in, but they work so hard to make it happen and they never ask for anything other than for us to defend the Constitution of the United States and love America. They are wonderful people and to get this award from Betsy is a very special honor. I looked around this room as I walked in and there are some very big, real heroes of mine in this room, fighters for freedom on many, many different levels.