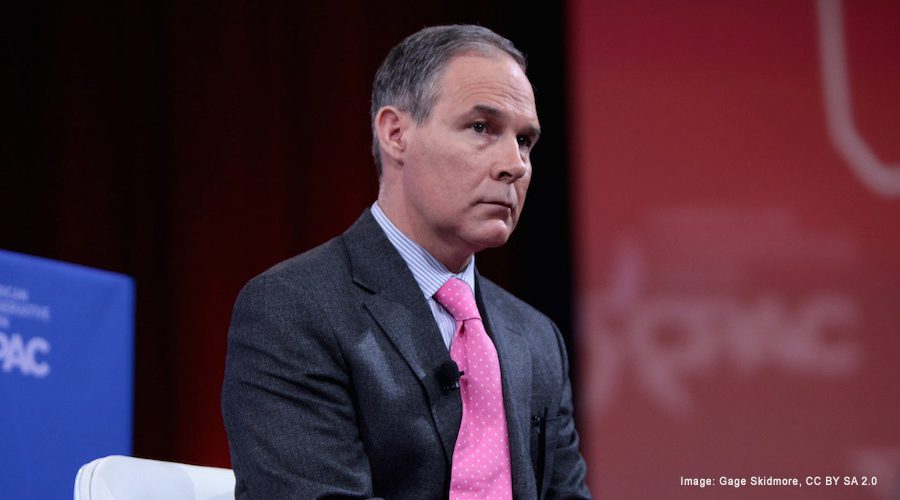 OKLAHOMA CITY, Okla.— Days before the full Senate votes on Scott Pruitt’s nomination to head the Environmental Protection Agency, the Center for Media and Democracy (CMD), a national investigative watchdog group, alleges in a new lawsuit that as Oklahoma Attorney General Pruitt has violated the Oklahoma Open Records Act for failing to provide public access to official emails and other documents for more than two years. The lawsuit also asks for an injunction to prevent the Oklahoma Attorney General from destroying any documents relevant to the group’s open records requests.

Alongside the petition, counsel is requesting an emergency hearing due to the impending Senate vote on Pruitt’s nomination.

CMD filed seven records requests with Pruitt’s office in 2015 and 2016, and another two requests last month, seeking communications with Koch Industries and other coal, oil and gas corporations, as well as the corporate-funded Republican Attorney General’s Association (RAGA). Pruitt has yet to turn over a single document, despite acknowledging in August 2016 that his office has 3,000 emails and other documents relevant to CMD’s first request in January 2015.

CMD is represented in the lawsuit by Robert Nelon, a leading media and First Amendment lawyer at Hall Estill, and by the ACLU of Oklahoma, which is also leading an ongoing case against Okla. Governor Mary Fallin for her denial of two plaintiffs’ access to public records for over 900 days in violation of this same legislation.

“Scott Pruitt has withheld access to thousands of emails with businesses or organizations whose activities adversely affect the environment and other records of vital public interest for the past two years. His inaction denies the public ‘prompt and reasonable’ access to public documents and violates Oklahoma’s Open Records Act,” said Nelon.

Under the Oklahoma Open Records Act, “the people are vested with the inherent right to know and be fully informed about their government . . . so they may efficiently and intelligently exercise their inherent political power.” The Act also mandates that a public body “must provide prompt, reasonable access to its records.”

“Attorney General Pruitt had two years to respond to a lawful request for documents from his office. Instead of complying with the law, he has stonewalled public interest groups, the United States Senate, and the American people,” said Ryan Kiesel, ACLU of Oklahoma Executive Director. “Pruitt’s refusal to turn over these documents is unreasonable and unjustifiable. The lawsuit we filed today serves notice that when it comes to accountability and transparency, no government official is above the law.”

For the past several years, CMD has led an investigation to pull back the curtain on Pruitt’s, and other attorneys general’s, relationships with fossil fuel industry titans and the advocacy groups they fund.

The lawsuit comes on the heels of a difficult few weeks for Pruitt’s nomination in which research from CMD has demonstrated Pruitt’s repeated pattern of obfuscating ties to deep-pocketed, corporate interests.

At his hearing before the Senate Environment and Public Works (EPW) Committee, Pruitt faced a series of questions about his private meetings with major fossil fuel companies while chair of the Republican Attorneys General Association and fundraising for the Rule of Law Defense Fund. Senator Sheldon Whitehouse concluded his questioning telling Pruitt his testimony “just doesn’t add up.” Despite failing to respond to any records requests for the past two years, Pruitt told U.S. Senators last week to file more open records requests with his office to answer 19 outstanding questions from his confirmation hearing.

“Public servants at the EPA spend each day trying to counter corporations’ injection of dangerous chemicals into our air, water and homes, but Pruitt refuses to discuss his deep connections to the companies he would oversee and has repeatedly shown contempt for the Senate’s responsibility to their constituents to properly vet his nomination,” said Nick Surgey, CMD’s Director of Research. “Families in Michigan and Pennsylvania grappling with unsafe drinking water, communities from California to Florida dealing with damage to our climate and parents looking for ways to clean up the air their kids breathe all deserve the facts behind whose interests Pruitt really serves.”

After Democratic Senators boycotted the EPW Committee vote due to concerns over Pruitt’s conflicts of interests and failure to fulfill open records requests, Republicans resorted to suspending Committee rules to advance his nomination. Pruitt is expected to face a full Senate vote next week.

Over the past 15 years, Pruitt has received nearly $350,000 in campaign contributions from the fossil fuel industry, including Continental Resources whose CEO served as his 2014 campaign chairman. Pruitt has also raised substantial funds for his two federal PACs – Liberty 2.0 and Oklahoma Strong – from fracking giant Devon Energy and coal company Alliance Resources. In 2014, a New York Times investigation found that Devon Energy lobbyists drafted letters for Pruitt to send to the EPA and Department of the Interior under his own name.

Last year, Pruitt orchestrated an effort by Republican state attorneys general to oppose the confirmation of Merrick Garland to the Supreme Court. In March, Pruitt sent an email to supporters of his federal PAC boasting of his efforts to block Garland’s confirmation as well as “successfully [block] the President’s Clean Power plan, his immigration rule and his attempt at a massive takeover of the waters of the U.S.”

A copy of the complaint filed today can be found here.