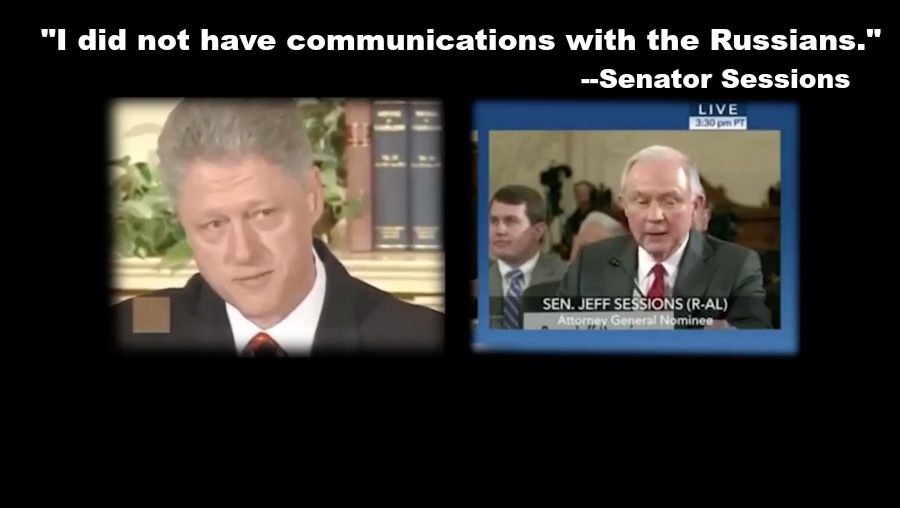 During the Senate impeachment trial of President Bill Clinton, then-Senator Sessions made several statements about lying under oath, or perjury, as grounds for impeachment.

This week the American people learned that Sessions did not tell the truth to the U.S. Senate Judiciary Committee and the public during the hearings on his nomination to be the Attorney General of the United States, the highest law enforcement office in the nation.

In his oral and written testimony–that was under oath–he directly stated he did not have communications with Russia and misled the Committee about his own contacts with Russian officials while he was also serving as a surrogate for Trump.

In light of this, CMD is posting these excerpts of his statements from the impeachment trial in 1999.

I would say this about the case. Others may see it differently. But with regard to the obstruction article, I might have a bit of a quibble with the way the case was presented. I think there was a lot of time and effort spent on trees and not enough on the plain forest.

Let me just say to you why I believe the proof of obstruction of justice is so compelling, beyond a reasonable doubt, to a moral certainty. That is because the President received interrogatories, he got a subpoena to a deposition, and he knew his day was coming.

The Constitution is a marvelous document. We respect it. To do so, we must enforce it as it is written.

It says that civil officers, judges are removed for only those offenses. There are no distinctions between the President and judges. Just because one official is elected and one is not elected, one’s term is shorter, or there are more judges than Presidents—makes no difference—that is not what the Constitution says. They face the same standard for impeachment.

I really believe we are making a serious legal mistake if we suggest otherwise. If the standard is the same, then we have a problem because we removed a bunch of judges for perjury.

Of course a President gets elected, but the President holds office subject to the Constitution.

I don’t think there is a lot of give in this, frankly….

Perjury and its twin, obstruction of justice, do amount to impeachable crimes….

I do not believe the Constitution says that the standard for removal is whether somebody is a danger to the Republic’s future.

The Constitution says if you commit bribery, treason, or other high crimes or misdemeanors, you are out, unless there are some mitigating circumstance somebody can find, but the test is not whether or not the official is going to continue to do the crime in the future….

I have tried hundreds of cases. I have seen witnesses personally. I have been with them before they testified and have seen them agonize over their testimony…. I have seen people cry because they did not want to tell the truth, but they told it. They filed motions to object to testifying, but when it came right down to it, they told the truth.

I believe truth is a serious thing. Truth is real and falsehood is real. This is, in my view, a created universe and we have a moral order and when we deny the truth we violate the moral order and bad things happen. Truth is one of the highest ideals of Western civilization commitment to it defines us as a people.

As Senator KYL said, you will never have justice in a court of law if people don’t tell the truth….

Each statement must be individually evaluated in a perjury case. The President’s statements that he did not believe he had violated the law and that he was not paying ‘‘a great deal of attention’’ to his lawyers when they gave false information to the court are not credible….

Indeed, the pursuit of truth wherever it leads has been a hallmark of our civilization and is the single quality that has made us such a vibrant and productive nation. Of course, none of us are perfect and we often fail in our personal affairs, but when it comes to going to court, and its comes to our justice system, a great nation must insist on honesty and lawfulness. Our country must insist upon that for every citizen.

The chief law officer of the land, whose oath of office calls on him to preserve, protect and defend the Constitution, crossed the line and failed to defend the law, and, in fact, attacked the law and the rights of a fellow citizen. Under our Constitution, equal justice requires that he forfeit his office.

For these reasons, I felt compelled to vote to convict and remove the President from office.

A full transcript of the proceedings is available at https://www.gpo.gov/fdsys/pkg/CDOC-106sdoc4/pdf/CDOC-106sdoc4-vol4.pdf.