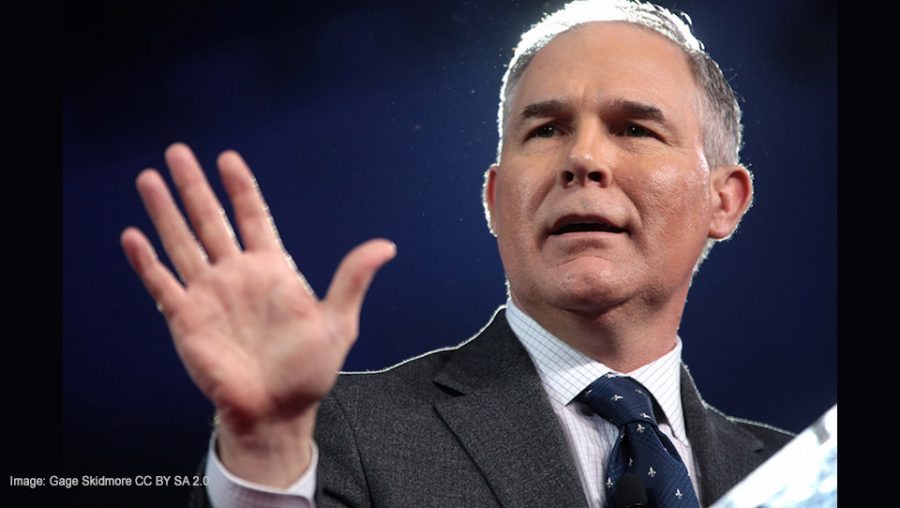 The emails were obtained after the Center for Media and Democracy filed an open records lawsuit against Pruitt in February for his two-year-long failure to respond to our open records requests for his email correspondence with major fossil fuel corporations.

An Oklahoma state court ordered Pruitt to release thousands of emails which are now online and available for public inspection, but CMD is still in court seeking to obtain 1,600 pages entirely withheld from the public under his assertion that they are privileged from release.  CMD is also seeking emails from its first request that were not released and that include Pruitt’s correspondence in 2016 with corporations. CMD is also awaiting responses to eight other open records requests to Pruitt, whose release was delayed after the state Supreme Court halted the lower court’s order to expedite their release due to Pruitt’s dilatory handling of the requests.

Pruitt was an Oklahoma state senator from 2002-2007. As a legislator, Pruitt chaired the ALEC Civil Justice task force in 2003 and perhaps other years. ALEC is a corporate bill mill where legislators and industry lobbyists work together behind closed doors to draft industry-friendly bills that are then introduced in state houses across the nation as “innovative” public policy stripped of their industry origins.

But Pruitt touted industry influence as a plus in an interview. “ALEC is unique in the sense that it puts legislators and companies together and they create policy collectively,” Pruitt said.

One cookie-cutter bill approved by ALEC’s Civil Justice task force in 2003 was the Asbestos and Silica Claims Priorities Act. It is one of many ALEC bills geared toward protecting the deadly asbestos industry and companies that don’t protect their workers from known asbestos or silica hazards. The bill increases the burden on a person bringing a lawsuit alleging an asbestos and silica-related injury.

Asbestos-related diseases kill at least 10,000 Americans every year, in many cases from mesothelioma, an incurable and painful cancer caused by exposure to asbestos. For decades, asbestos was used for insulation and industrial purposes, and the diseases particularly affect veterans, firefighters, construction workers, and individuals who worked in factories with high-heat machinery. In Wisconsin, veterans groups have been some of the most vocal opponents of the legislation: veterans make up just 8 percent of the population, but are 30 percent of mesothelioma cases.

Crystalline silica is also deadly. It can be found in sand, gravel, and stone as well as sidewalks and building materials. Silica dust has been classified as a human lung carcinogen and results in fatalities and seriously disabling illnesses. According to OSHA, silica exposure “remains a serious threat to nearly 2 million U.S. workers, including more than 100,000 workers in high risk jobs such as abrasive blasting, foundry work, stonecutting, rock drilling, quarry work and tunneling.” ALEC wants to make it harder for injured workers or their families to seek compensation.

Other bills approved by ALEC around that time include:

After Pruitt became attorney general, he stayed engaged with ALEC on energy and environmental issues. ALEC is funded by a number of big polluters including Devon Energy, Peabody Energy, Koch Industries, and ExxonMobil. In 2014, the New York Times won a Pulitzer Prize after it filed an open records request and exposed the fact that Pruitt received a letter from Devon, put it on his state letterhead, and sent it to the EPA. The Devon lobbyist lauded this move as “Outstanding!”

A February 2013 email from Amy Anderson, the ALEC Civil Justice task force staffer, asked for the AG’s digital signature for an ALEC letter. Pruitt’s office zipped over the signature minutes later. The letter was not disclosed. Another email from Anderson to Pruitt and others, provides details of Pruitt’s participation in an energy workshop at ALEC’s May 2013 meeting.

Included in the email was an invitation to “a reception on the evening of the 3rd at the Petroleum Club.” The Petroleum Club is a swank private club for industry executives at the top of the Chase Tower in downtown Oklahoma City. Anderson also requested Pruitt’s attendance at a luncheon sponsored by Koch Industries because it “would be delightful to have our current legislative members benefit from his experience as a former state legislator, an ALEC member and a now attorney general.”

Pruitt spoke at a December 2013 ALEC meeting on a panel called “Embracing American Energy Opportunities: From Wellheads to Pipelines.” Now we know from the Pruitt emails that he was invited to speak at ALEC by an industry lobbyist named Peter Glaser, a partner at the law firm Troutman Sanders LLP. Glaser has represented Peabody Energy and other energy companies fighting EPA efforts to address climate change.

In 2014, Pruitt spoke at another ALEC meeting that was sponsored by Peabody Energy, ExxonMobil, Chevron, and the American Coalition for Clean Coal Electricity (ACCCE).

During his speech about the President Obama Clean Power Plan, Pruitt touted a line that polluting industries would love: “Beyond the regional haze case, we have something on the horizon, something more troubling. And that’s the proposed rule under 111(d) with respect to CO2 regulation. We have an EPA that is engaged in rulemaking, proposed rulemaking, that seeks to exert itself in a way that the statute doesn’t authorize at all.” Pruitt would join a group of states in a legal attack on the Clean Power Plan, a historic effort to rein in power-plant pollution by one-third over a span of years.

Keeping Up with the Kochs as Oklahoma Attorney General

“Frankly, I just assume the AG and Lankford talk sue and settle, how the EPA is deploying these tactics and what their respective offices have done on oversight and litigation, and let Yeatman from CEI give an objective analysis of costs to ratepayers from revised state implementation plan on regional haze (which includes the PSO rate increase). That way you guys don’t have to deliver those messages and can focus on what the AG does best, opposing the Obama administration and its nasty tactics on the environment.”

Industry groups and the U.S. Chamber of Commerce claim that agencies like EPA are “regulating” outside the normal rule making process when they are sued by environmentalist groups, like Greenpeace and Sierra Club, for not following the law and then settle those lawsuits in legally binding, court ordered agreements without inviting states or industry to participate.

Cooper promptly responds, “I think that what be good from our standpoint.” Ball, on August 14, sends an email with the final schedule detailed in which he praises Pruitt for “all they are doing to push back against President Obama’s EPA and its axis with liberal environmental groups.” Pruitt led a group of state attorneys general in suing the EPA for its correspondence with environmental groups.

In another email, Ball requests a same day meeting with Pruitt’s Chief of Staff and Assistant Attorney General, Melissa Houston and she agrees to meet him the next day in the AG’s conference room. The fractured emails do not indicate what the meeting was about.

Yet another email from December 2013, invites Dean Kuckelman, Senior Counsel, Litigation and Discovery, for Koch Companies Public Sector to a conference call with two of Pruitt’s assistant attorneys general and the Solicitor General. The topic of the conference is not known.

This email followed an email from Kuckelman to Houston with an attachment produced by the American Tort Reform (ATR) entitled, “Judicial Hell Holes.” The Kochs share ATR’s goals to make it harder for consumers to sue over products and services that kill or injure people. Judicial “hell holes” refer to states where it is easier for consumers to sue or unite in class action suits against giant, deep-pocketed corporations.

This is only a small sampling of the emails between Koch and ALEC staff and Pruitt staff, CMD is fighting for 1,600 pages withheld by Pruitt’s office in the lawsuit and additional emails, which will shed more light on these meetings and relationships.

The cozy relationship between Pruitt, the Kochs, ALEC crew, and the big polluters who fund ALEC will no doubt continue as Pruitt begins to dismantle the EPA.

Upon his appointment ALEC released a statement lauding Pruitt and claiming that Trump has “found just the right person to bring fresh leadership and much-needed reform to an agency currently out of control. Anyone who values striking a balance between sensible environmental regulations and the rule of law should delight in Pruitt’s appointment.”

While the corporate-fueled ALEC may be delighted, Americans concerned about the future of America’s lakes, bays, rivers, and more find Pruitt’s close relationship with polluters not very charming.