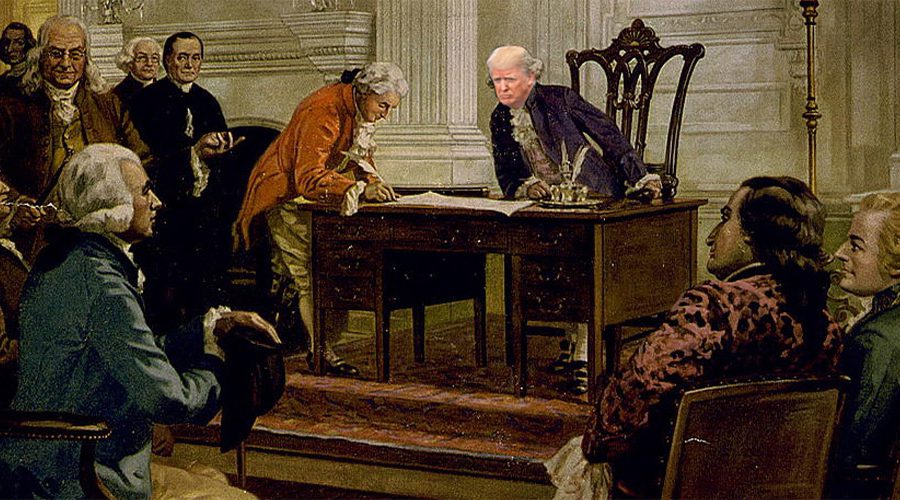 Wisconsin State Senator Chris Kapenga (R-Delafield) wants a balanced budget amendment to the U.S. Constitution, and he wants a new constitutional convention to ratify it.

A constitutional convention makes for a snappy hashtag, #ConCon. But, as GOP leaders in Idaho recently discovered, it is a dangerous and impractical idea that could result in a “runaway” convention and substantial rewrites to the U.S. Constitution.

Under Article V of the U.S. Constitution, if 34 state legislatures “issue a call” for a constitutional convention, Congress must convene one. By some counts, the right-wing only needs six more states.

Kapenga is a long-time member of the corporate-funded American Legislative Executive Council (ALEC). ALEC is so gung-ho about the constitutional convention idea that it has multiple “model bills” pushing the idea and a “how-to” manual on how to achieve it. ALEC hosts workshops and events for several pro-convention groups, including the Balanced Budget Amendment Task Force. It also promotes a much broader effort to re-write the Constitution by Citizens for Self Governance. That group is led by “Tea Party Patriots” co-founder Mark Meckler and Wisconsin dark-money man Eric O’Keefe.

Kapenga’s Senate Joint Resolution 18 calls for a constitutional convention and states that the resolution represents a “continuing application” for a convention. This language is included so the resolution does not have to be renewed, and in hopes of preventing its repeal by future legislatures. Senate Bill 107 states that the GOP-controlled legislature and the governor will appoint seven delegates to the convention, and attempts to provide for the replacement of delegates if they go off-script. Senate Joint Resolution 19 commits the state of Wisconsin to follow a set of convention rules and procedures drafted by the “Assembly of State Legislatures.” Kapenga and friends founded the organization to advance the constitutional convention idea, and that group too has presented at ALEC.

Recently, Kapenga’s office circulated a memorandum to legislators asking for their support. His memo claims that federal debt levels have “skyrocketed,” that they are “unprecedented,” and “are putting at risk the life, liberty and pursuit of happiness that Jefferson spoke of (sic) in the Declaration of Independence.”

It fails to note that the federal debt was higher in the late 1940s, when measured as a percentage of the national economy, without damaging the nation’s “life, liberty, and pursuit of happiness” in any way. In fact, the decades that followed were the most prosperous in modern American history. In addition, interest payments on the federal debt today are low by historical standards.

Kapenga’s memorandum also states that current debt “equates to over $166,000 of debt per taxpayer” and claims that if families earning the median income “were required to list this debt on their personal financial statement, most would qualify for bankruptcy.”

But that’s a poor analogy, as Tamarine Cornelius from the Wisconsin Budget Project explains:

“… proponents of a balanced budget amendment to the U.S. Constitution often argue that families have to balance their budgets and the federal government should do the same. But in fact, families often borrow to make worthwhile investments – taking out a mortgage to buy a home, for example, or getting a loan to pay for a child’s college education. In contrast, the balanced budget amendment would prohibit the federal government from borrowing to make investments even if they have substantial future pay-offs.”

On the other hand, an austerity amendment would limit the nation’s ability to respond to economic crises, military threats, or natural disasters. Macroeconomic Advisors, a private consulting group, concluded that a balanced budget amendment would “retard economic growth” and would be “catastrophic” during deep recessions.

Moreover, the Center for Budget and Policy Priorities (CBPP) found that a balanced budget amendment would endanger Social Security and could result in a number of programs, including Medicare and veterans’ benefits, being cut by more than half. The authors estimated that such an amendment would have led to the loss of 15 million American jobs if it had been in place in 2012.

Risk of a Runaway Convention

Kapenga claims that his measures would limit the range of issues Wisconsin’s delegates could bring forward at that convention. ALEC peddles the same argument. But delegates to the first (and, to date, only) constitutional convention, which was held in 1787, were accused of exceeding their mandate at the time.

Experts at the CBPP have concluded that any convention call, no matter how narrowly written, could result in a “runaway” convention. Why? Because the Constitution doesn’t provide any guidance or constraints on how a convention would operate once called. State politicians or Congress could write their own agenda and rules about the way delegates are chosen, the number of delegates allowed from each state, and whether or not a supermajority is required to approve amendments. Once in the room, delegates to a convention can ignore the limits that Kapenga and friends have attempted to place on them.

“The 1787 convention ignored the ratification process under which it was established and created a new process, reducing the number of states needed to approve the new Constitution and removing Congress from the approval process,” writes CBPP.

Former Chief Justice Warren Burger, a Republican who was appointed to the Supreme Court by Richard Nixon, reached the same conclusion. Burger wrote in 1988 that “there is no way to effectively limit or muzzle the actions of a constitutional convention. The convention could make its own rules and set its own agenda.”

If Burger is too liberal for you what about Antonin Scalia? Justice Scalia warned “I certainly would not want a constitutional convention. Whoa! Who knows what would come out of it?”

The 1787 convention was presided over by George Washington and included many our nation’s most respected Founders. If a gathering like that can be accused of exceeding its mandate, imagine what a convention funded by ALEC ideologues and corporate interests might do. They could rewrite a document that has stood the test of time for 230 years. The Kochs are not only big funders of ALEC but have provided to support to many of the institutions pushing the convention idea.

Republicans Reject the #ConCon in Idaho

The Idaho State Senate recently defeated a measure like Kapenga’s after an open debate. On March 1, 2017 Idaho’s version of the ALEC model bill went down 11-24.

It was a rare moment of bipartisan common sense that would have made Thomas Paine proud.

“You might end up opening up a can of worms into a whole bunch of areas that I think probably a lot of folks here in Eastern Idaho would not want to see changed in the Constitution,” said Idaho Republican official Dan Cravens. Cravens thinks those in favor of the balanced budget amendment should try to pass it as a traditional amendment and forget about the convention.

Another Idaho Republican, Assistant Majority Leader Chuck Winder of Boise, expressed grave reservations about the plan’s fiscal implications. “What would this balanced-budget amendment look like?” asked Winder. “Would the budget need to be balanced by 2027? Would there be exceptions for war?”

Winder went on to say of Idaho’s balanced budget amendment bill: “If we don’t know what it is, why would we want to do it? It doesn’t feel right, and I think the risk is too great.”

Senate Majority Leader Bart Davis, a Republican from Idaho Falls, said there is wide disagreement among legal scholars on these questions. In determining his vote, he said he weighed the “known risks” of the federal debt against the “procedural uncertainty” that could arise from a convention. And the uncertainty is particularly bad at this time in American history, he argued.

“We have members of Congress that aren’t even willing to go home and hold a town hall meeting because of what’s happening,” said Davis. “And somehow, in that environment, we want to hold a constitutional convention?”

Even the Wisconsin GOP can agree that Donald Trump is no George Washington. The risks of a constitutional convention in this day and age far outweigh the benefits.