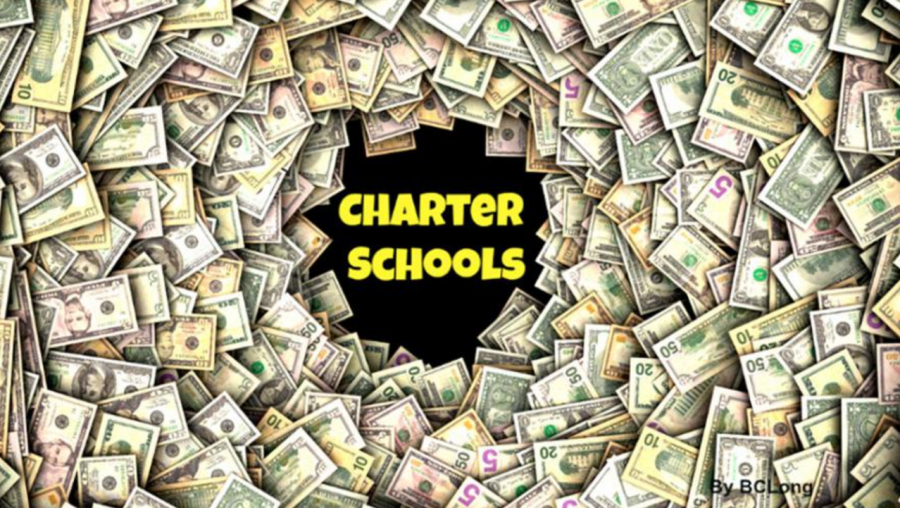 National Charter School Week 2017: School Privatizers like their Chances Despite their Record of Failure

May 1-5 is National Charter School Week, and it comes at a time when charter school and school privatization advocates must be wondering how they should feel.

On one hand, the president of United States and the secretary of United States Department of Education are not just school privatization advocates, but hyper-zealous activists for the cause. Billionaire philanthropist and GOP super-donor Secretary of Education Betsy DeVos has devoted a good portion of her adult life to undermining public schools and advancing the cause of private charter schools and private school vouchers.

Trump has pledged to set aside $20 billion for vouchers and “school choice,” and in March introduced a federal budget that would have dismantled public schools through a 13 percent cut to federal education funding, massive cuts to public school teacher training and after-school programs, and transfers of public education funds to private schools. The Center for American Progress wrote at the time, “Every budget is a statement of values and this one could not be more clear in the vision it presents: starve the public school system and privatize education.”

On the other hand, while charters and vouchers have friends in high places, almost everything we learn about them these days is bad. Numerous studies show a startling pattern of failure for voucher schools, private charter schools and virtual charter schools. The privatization idea is failing in the classroom, failing at the ballot box, and failing in the court of public opinion.

Think of the future of school privatization as a poker tournament. The privatization idea is playing with a terrible hand, but in Trump and DeVos it has players who are going to bet the house no matter what. Will they be able to bluff their way to victory and dismantle public education in favor of a privatized system of voucher and charter schools that are largely unaccountable and proven ineffective?

How We Got Here

As PR Watch has documented, the federal government under President Barack Obama and his secretaries was an advocate for charter schools, and did not seem to mind terribly if they were the public kind that are governed by school boards and local school district polices, or private charters, run by private boards and, usually, for-profit management companies. The federal government, under Obama, George W. Bush, and Bill Clinton, has spent at least $4 billion on charter schools in the last 25 years.

Many charter school advocates argue vociferously that public charters, private charters, virtual charters, and private school vouchers should not be lumped together. And most of the research on public charter schools, where there is more oversight and transparency, shows stronger student achievement than for private charters, virtual charters and vouchers. However, there is no denying that the leap between a public charter and a privatized school is shorter than it is for traditional public school. Many charter school advocates cheered Trump’s victory and DeVos’s appointment. Charter schools are a crucial element of the “school reform” movement undertaken by wealthy individuals, corporations, and right-wing organizations such as ALEC,

DeVos’s Michigan might provide the best example of the failed charter school experiment.

One in-depth look at Michigan school performance by the New York Times reported that Michigan’s 23-year experience with charters and choice has created in Detroit “a public education fiasco that is perhaps unparalleled in the United States.”

Michigan taxpayers spend more than $1 billion per year on charter schools, and 80 percent of the schools are operated by for-profit management companies. The result, confirming the finding of the Center for Media and Democracy’s investigative report The Charter School Black Hole, is the degeneration of education for just about everyone in Michigan.

A 2015 federal review of Michigan’s charter schools found an “unreasonably high” number of charters among the worst-performing 5 percent of public schools statewide. The number of charters on the “worst performers” list had doubled in just four years. Overall, Michigan has gone from a middle-of-the-pack state to the bottom tier in just 12 years. The state’s NAEP ranking on fourth grade reading has dropped from 28th in 2003 to 41st in 2015, the latest results. The fourth grade math ranking has dropped from 27th in 2003 to 42nd. The Detroit Free Press runs down the numbers here.

DeVos and her family donated more than $44 million to Michigan Republican campaign committees and candidates between 1997 and 2012, and put another $8.3 million into Michigan’s 2014 and 2016 elections. They have spent millions more on special interest groups such as American Federation for Children that do not report how much they spend to influence elections and legislation.

“Their influence can be seen in just about every major piece of education-related legislation in Michigan since the 1990s. That includes the 1993 law that permitted charters in the state and a 2011 vote to lift a cap on the number of charter schools in the state,” says Politico.

If Michigan isn’t the worst case scenario for charter schools, then Ohio is. As has been well documented by CMD and others, Ohio’s charter schools have been beset by scandal and poor performance but are nonetheless awash in tens of millions of dollars of federal largesse. One element of the scandal is that the state’s department of education understated the number of failing charter schools by a factor of ten.

Ohio’s problems have been exposed repeatedly over the last two years, but they received renewed scrutiny during the 2016 elections because of links to Ohio elected officials who were involved in the elections. During the Republican presidential primary, Ohio Governor John Kasich was forced to answer questions about his support for charter schools in the face of his state’s poor record.

Also, Ohio Senator Sherrod Brown shed new light on Ohio’s problem with charter schools when he was working hard to become Hillary Clinton’s running mate last summer. This was part of what has been seen as a shift against charter schools on the Democratic part of the spectrum just within the last year. At the Democratic Party platform committee in July 2016, the platform’s language was changed to position Democrats against for-profit charter schools and in favor of more oversight of all charter schools.

The platform now reads, “Democrats oppose for-profit charter schools focused on making a profit off of public resources. We believe that high quality public charter schools should provide options for parents, but should not replace or destabilize traditional public schools. Charter schools must reflect their communities, and thus must accept and retain proportionate numbers of students of color, students with disabilities and English Language Learners in relation to their neighborhood public schools. We support increased transparency and accountability for all charter schools.”

Also in July, delegates at the NAACP’s annual convention voted for a resolution to put a moratorium on the creation of new charter schools. Three months later, after enduring a fierce campaign of lobbying from charter schools advocacy groups, the NAACP’s board of directors ratified the resolution and made it a permanent part of the organization’s policies. The resolution calls for greater transparency, accountability, and an assurance that charter schools are not draining money from public schools.

Meanwhile a spate of research shows deep, troubling problems with private school vouchers. A study by the Economic Policy Institute and three exhaustive state studies featured in a February 2017 New York Times article paint a grim picture for students whose parents are seduced by the marketing campaigns peddling school privatization. In the words of New York Times writer Kevin Carey, “The results are startling — the worst in the history of the field, researchers say.”

Late in 2015, researchers studied an Indiana voucher program that served tens of thousands of students under former Indiana governor and current Vice President Mike Pence. “In mathematics,” the researchers found, “voucher students who transfer to private schools experienced significant losses in achievement.” They saw no improvement in reading.

In February 2016, researchers published a major study of Louisiana’s voucher program. They found large negative results in both reading and math. Public elementary school students who started at the 50th percentile in math and then used a voucher to transfer to a private school dropped to the 26th percentile in just one school year.

Martin West, a professor at the Harvard Graduate School of Education, told Carey the negative effects in Louisiana were “as large as any I’ve seen in the literature” in the history of American education research.

Last summer, another voucher study focused on Ohio found bad educational outcomes from voucher students. Significantly, the study was released by the Thomas B. Fordham Institute, a conservative think tank that backs vouchers, and financed by the pro-voucher Walton Family Foundation. “Students who use vouchers to attend private schools have fared worse academically compared to their closely matched peers attending public schools,” the researchers found.

Finally, in the Economic Policy Institute report, the author finds that vouchers have not only failed to improve students’ educational outcomes but have succeeded in diverting investments in public education programs and methods that have been shown to work. The study reviews evaluations of voucher programs in cities including Milwaukee, Dayton, Ohio, and Washington, D.C., and states including Indiana, Louisiana, and Florida to show that vouchers do not improve student test scores and probably do not improve graduation rates either. In Milwaukee, which has had a voucher program for more than 25 years, African American students rank second to last for eighth grade math scores and dead last for reading scores.

When DeVos and her husband Richard led a movement to change the Michigan state Constitution to permit vouchers for religious schools in 2000, the referendum was defeated by a margin of more than 2 to 1. Voters in Republican Utah also rejected vouchers by a similarly wide margin in 2007. Florida was the last state to reject vouchers in 2012, 58-42 percent. Last November, an initiative in Massachusetts to expand charter schools to allow more privatization also went down.

Also, public school advocates who oppose the expansion of charter schools and vouchers might take some measure of joy in the coincidence of National Charter School Week and Trump’s 100th day in office occurring in consecutive weeks. The defining feature of Trump’s time in office so far is that it has had no defining feature except for the failure to achieve any of his objectives. They are hoping that his objective to turn public schools into private ones is one more gamble that doesn’t pay off.

Indeed, much of the Trump and DeVos education budget seems to have been shot down by Congress this week. The budget Congress is expected to vote on decreases federal education by $60 million, not the $9 billion Trump had proposed. The budget deal does not include any money for vouchers or a new school choice program, but that could resurface in 2018.

Andrew Ujifusa, a writer for Education Week, wrote on May 1, “Lawmakers appear to be sending early signals of independence from the Trump administration on education budget issues.”

Dustin Beilke is a freelance writer from Madison, WI.

All articles by Dustin Beilke