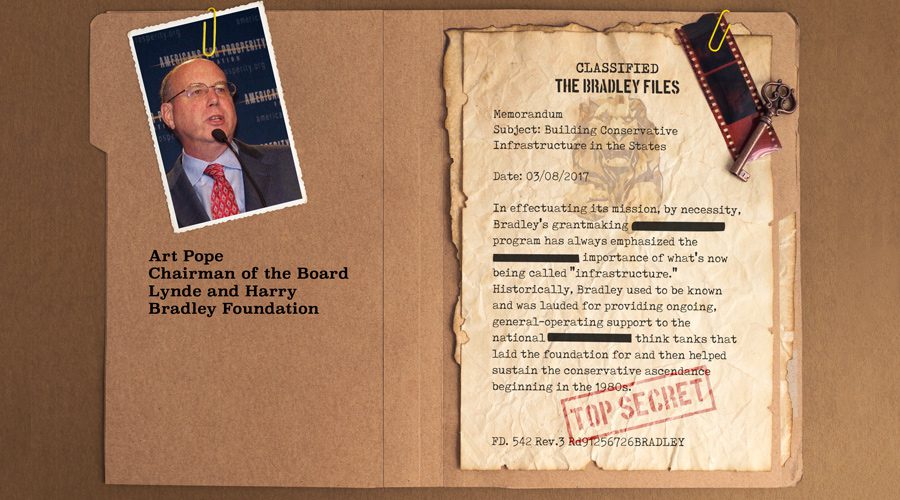 The Center for Media and Democracy has been pulling back the curtain on the Bradley Foundation’s efforts to advance an extreme right-wing agenda in the states.

Besides Wisconsin, one of the foundation’s favorite states appears to be North Carolina, home to GOP mega-donor Art Pope, who is also the new chairman of the Bradley Foundation Board.

Pope is the multimillionaire CEO and Chairman of Variety Wholesalers, a discount store in 15 Southern states.

Pope is a founding board member and prominent funder of David and Charles Koch’s astroturf campaign operation, Americans for Prosperity, earning him the nickname Koch Jr. by critics. The groups Pope has founded and funded, have pursued a far-right agenda in North Carolina, including supporting voter suppression, racial gerrymandering and other extreme policies.

Now the Bradley Foundation, which has its own controversial history on these issues, is granting two key Pope groups a total of $1.5 million over three years, a hefty increase in operating revenue for a $2.5 million operation.

Founded by Pope in 2005, Civitas fashions itself as a “think tank,” but has served as a far-right partner of the state Republican Party. Its connected 501(c)(4) nonprofit, Civitas Action, has spent hundreds of thousands of dollars on state elections since 2010. That year, bankrolled by Pope’s Variety Stores and the Kochs’ Americans for Prosperity, Civitas Action spent over $200,000 to help elect Republicans to the state House and Senate, helping to give the GOP majorities for the first time in over a century.

The three-year, $1.5-million Bradley grant that began in 2015 is intended to “create a comprehensive and disruptive communications infrastructure…around four primary elements: radio, online content aggregation, mobile applications, and an AP-style news service for local newspapers,” according to Bradley documents. While some of these initiatives have moved forward, like the “Mapping the Left” website which profiles North Carolina liberals and tries to cast them in a negative light, others have stalled.

Mapping the Left is an extension of the Civitas’s efforts to create a database of activists arrested at the well-known Moral Monday protests at the state legislature in Raleigh.

The Institute for Southern Studies and its online magazine Facing South noted that:

“Civitas’ database brings to mind another troubling episode of mid-20th century U.S. history: how in some Southern cities at that time the white-supremacist White Citizens’ Councils (WCC) would publish in local newspapers the names of NAACP supporters and those who signed anti-segregation petitions in order to encourage retaliation against them.”

Civitas has repeatedly attacked Rev. Dr. William Barber, the state NAACP president and the leader of the protest movement, and the movement itself with shoddy research and dubious claims, and Barber of course is a star of the Mapping the Left website.

But the grant should be seen in the context of Bradley’s efforts to beef up the communications and litigation capacity of State Policy Network groups nationwide. Civitas is a member of the State Policy Network, a key consortium of think tanks, plus right-wing advocacy groups in the states that Bradley has lavished with some $116 million in funds, according to CMD’s calculations.

Civitas’ annual revenue for 2015 was only $2.5 million, so the Bradley infusion is a massive uptick for the group. In previous years, the Bradley Foundation gave Civitas smaller grants, including $100,000 for “general operations” in 2015 and $160,000 from 2014-2015 for Civitas’ new litigation center, the Center for Law and Freedom.

Gerrymandering and Suppressing the Vote in North Carolina

In North Carolina, Pope is a dominant force in GOP fundraising and policy strategy, bankrolling candidates and political committees like “Real Jobs NC,” a 527 political committee that helped Republicans take control of the legislature in 2010. Pope served on the group’s board while the Republican State Leadership Committee funneled $1.25 million into that election through Real Jobs NC, seeking to put Republicans in charge of the 2011 redistricting effort.

Once the GOP gained control of the legislature, they, with help from Pope and the Republican State Leadership Committee, drew legislative and congressional voting districts that disenfranchised black voters. Several courts, including the U.S. Supreme Court, have ruled that the maps are unconstitutional racial gerrymanders. On June 5, 2017, the Supreme Court affirmed a lower court’s ruling that Republicans had intentionally packed black voters into a small number of districts, diluting their voting power in the surrounding areas. Two congressional districts have already been redrawn, and 28 legislative districts–most represented by black politicians–will need to be redrawn in the near future.

The history of the Pope network’s assaults on voting rights was well documented by Facing South. From 2009 through 2013, the publication found, Civitas and the John Locke Foundation published more than 50 articles, op-eds and blog posts “ginning up fear of voter fraud,” something so infrequent as to be statistically insignificant. One such article from 2010 absurdly claims that thousands of 110-year-olds were voting in North Carolina, a claim PolitiFact confirmed was false.

The Pope/Civitas strategy was, and still is, to capitalize on its unsubstantiated claims of widespread voter fraud by promoting harsh voter suppression measures. In 2012, Civitas promoted the Voter Integrity Project, a group that incorrectly challenged hundreds of North Carolina voter registrations. The group went on to attempt to purge thousands of voters, disproportionately African-American, from the rolls shortly before the 2016 elections, but a federal judge prevented three counties from revoking these residents’ voting rights.

In 2013, Republican state legislators passed what some voting rights advocates call the “monster suppression law,” an elections omnibus bill with dozens of provisions, some of which were clearly intended to prevent liberals and African Americans from voting: strict voter ID, a shortened early voting period and the elimination of same-day registration and high school pre-registration, to name a few. Civitas advocated for the end to straight-ticket voting and high school preregistration, which both made it into the bill, and took some credit for the bill.

“I’d like to think we had a little hand in it,” said Civitas President Francis De Luca.

Many of the provisions targeted black voters “with almost surgical precision,” according to a ruling by the federal 4th Circuit Court of Appeals, which invalidated the law in July 2016. On May 15 of this year, the U.S. Supreme Court rejected an appeal of that ruling from state officials, leaving the lower court ruling intact.

GOP precinct chairman Don Yelton best described the North Carolina Republican Party’s motivations behind the elections omnibus bill during an interview with The Daily Show in 2013: “The law is going to kick the Democrats in the butt,” he said. “If [the law] hurts a bunch of lazy blacks that want the government to give them everything, so be it.”

Since the “monster” voting law passed, Civitas and the John Locke Foundation have continued their attempts at voter disenfranchisement. For example, after the election in November 2016, Civitas President Francis De Luca filed a lawsuit in a federal district court challenging North Carolina’s same-day registration policy, which had been struck down but reinstated by a federal court. After narrowly losing re-election, Gov. McCrory spent a month lodging unsubstantiated claims over alleged fraudulent voters. Meanwhile, Civitas went to court to void the votes of more than 90,000 same-day registration voters, who are disproportionately people of color.

De Luca eventually withdrew his lawsuit, but he and Civitas continue to fight against same-day registration, requesting data from the State Board of Elections in order to go after individual voters they believe to be fraudulent.

The lawsuit was “primarily a propaganda campaign to attack same-day registration and lay the groundwork for legislators who want to change or repeal it in 2017,” said elections watchdog Bob Hall of Democracy NC. Hall also makes a star appearance on the Bradley funded Mapping the Left site.

Pope’s John Locke Foundation, for its part, cheered on voter ID before it became law in North Carolina, and the foundation’s Carolina Journal claimed the requirement “worked well” in the 2016 primary election. In the John Locke Foundation’s “Locker Room” blog, authors have often defended the elections omnibus law. On June 12, 2017, the group’s chairman and president John Hood made the case for a new voter ID law and criticized the court ruling striking down most of the elections omnibus bill.

After being shot down by several courts for racially discriminatory voting laws, Republican lawmakers in the state are in fact planning yet another voter ID bill. At Civitas’ June 16 Conservative Leadership Conference, Heritage Foundation senior legal fellow Hans von Spakovsky, “the leading Republican activist behind voter suppression” according to the Nation’s Ari Berman, was a featured speaker. The Bradley Foundation funds Encounter Books, which published von Spakovsky’s 2012 book about “voter fraud,” that fueled and justified the GOP clamor for voter suppression measures.

The Pope organizations are in good company with other voter-suppression activities that the Bradley Foundation has funded.

In 2010, the Bradley Foundation donated $10,000 to the Einhorn Foundation, used in part to pay for 75 billboards with the ominous warning: “Voter Fraud is a Felony!” Many of these billboards were placed in black neighborhoods.

The Bradley Foundation is a big funder—$1.1 million between 1986-2015—of the corporate bill mill known as the American Legislative Exchange Council, which crafted “model” voter ID legislation in 2009. And Bradley has given $116 million to SPN “think tanks” and advocacy groups in the states that have peddled the party line on voter ID. Bradley also funds the Kochs’ Americans for Prosperity—$1.3 million to Americans for Prosperity Foundation from 1996-2015—which has pushed voter ID by, for instance, busing Republicans to hearings in North Carolina and elsewhere.

In 2013, the U.S. Supreme Court gutted the Voting Rights Act of 1965, handing a victory to the act’s challengers, whose legal fees were paid for by a Bradley-funded group called Project on Fair Representation. The Bradley Foundation gave $100,000 to the group twice in 2012 and in 2014. Shortly after the ruling, North Carolina legislators altered their in-progress elections bill to include as many voting restrictions as possible, knowing that elections law changes were no longer subject to federal approval, and quickly passed it.

And the Bradley Foundation gave True the Vote, a conservative voter suppression organization that has repeatedly presented wildly inaccurate data on fraudulent voters, $205,000 since 2011. In 2016, Bradley recommended an additional $60,000 to True the Vote. A group called the Public Interest Legal Foundation, which Bradley helps fund, has represented True the Vote in court.

A 2015 Bradley gave the Public Interest Legal Foundation $200,000 to support litigation by American Civil Rights Union forcing local governments to “clean up” voter rolls. Critics, like Stuart Naifeh, senior counsel for Demos, contend that the lawsuits are directed at low-income, Democratic-leaning counties. “The end goal seems to be getting these kinds of settlement agreements that require the state to do aggressive voter purging,” Naifeh told NPR.

Stay tuned. Voting rights advocates have won many victories in the courts, but with Donald Trump’s creation of an “election integrity commission,” chaired by one of the country’s biggest voter fraud conspiracy theorists Kris Kobach and Vice President Mike Pence, who took part in voter suppression of his own while governor of Indiana, Art Pope and the Bradley Foundation’s efforts to promote voter suppression measures may pick up speed.

CMD’s Mary Bottari contributed to this article, which was made possible through the work of CMD’s research team Nick Surgey, David Armiak, and Evan James. The author is a former employee of the Institute for Southern Studies and has a profile on the Mapping the Left website.