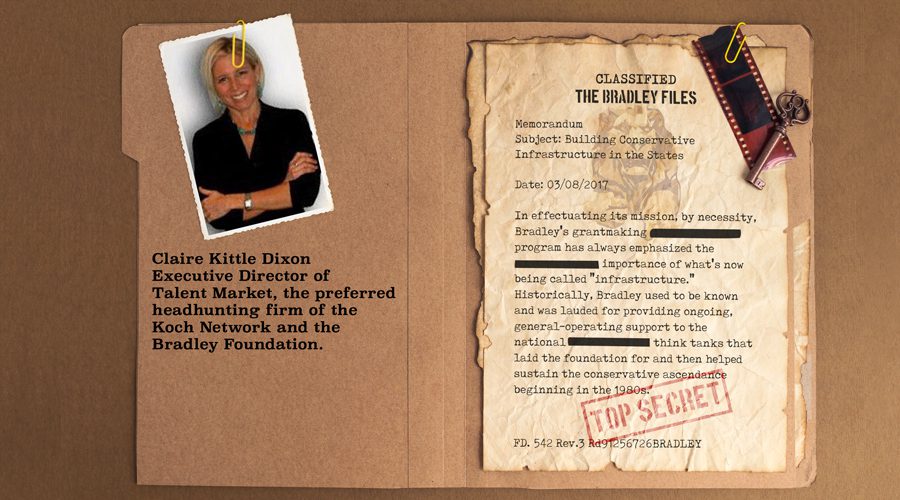 Look no further than “Talent Market” the nonprofit head hunting firm that claims to bring “talent and liberty together to make the world a better place.”

Talent Market’s list of clients is a “who’s who” of the far right, including the Koch’s Americans for Prosperity Foundation, the American Legislative Exchange Council and the Ayn Rand Institute. Current job openings advertised on the website include openings at the Charles Koch Institute, the Charles Koch Foundation, the Mackinac Center for Public Policy, the State Policy Network, and the Competitive Enterprise Institute (CEI).

The Koch-funded CEI is working hard to push climate change deniers into the Trump administration, so it is advertising for a “discrete” “libertarian or conservative” who can “discuss your philosophical alignment with CEIs mission and vision.” Greenpeace members need not apply.

Recently obtained internal files from the Milwaukee-based Bradley Foundation give new insight into the operations of this little-known group.

Talent Market was founded in 2009 as an “owned entity” of DonorsTrust, a donor advised fund favored by the billionaire Koch Network of ultra-wealthy right-wingers for its easy cloaking of donations to political allies. It is now an LLC attached to Donors Trust.

The Bradley Files credit three people with founding the organization: the former President and CEO of DonorsTrust Whitney Ball, President of the State Policy Network (SPN) Tracie Sharp, and Talent Market Executive Director Claire Kittle Dixon. The trio saw a need for a one-stop shop for “talent consulting” within the right-wing “movement” and conceived of the idea for Talent Market, state Bradley documents. Ideological vetting is another function of the group.

The Bradley Files reveal that the group has helped place over 270 leaders, fundraisers, and lawyers at more than 160 right-wing think tanks, media groups and advocacy organizations nationwide. Talent Market also acts as a consultant to the right-wing on “strategies for retaining top talent, including role changes, performance reviews, incentive programs and training,” (DonorsTrust, Grant Proposal Record, 6/2/2015).

And the Bradley Files show how the group operates. Bradley did not contribute to Talent Market until 2015 when it needed to hire a new Vice President for External Relations. Talent Market was utilized for the search and Bradley hired Jessica F. Dean for the position. Dean also serves as President of the Bradley Impact Fund, Bradley’s own donor advised fund.

DonorsTrust is not only a huge conduit for right-wing money, it is a member of SPN, a web of far right think tanks and advocacy groups (including the Kochs’ Americans for Prosperity Foundation) in 49 states, Puerto Rico, D.C., and the U.K. The late Whitney Ball helped launch SPN in 1999.

Over the years, Bradley has been a major financial backer of SPN and its members. Bradley has given $300,000 to SPN directly from 1993-2015 and $116 million in Bradley grants to SPN member groups. Bradley funnels some of its money via Donors Trust. Bradley has sent $3.2 million from 2001-2015 to DonorsTrust to support the Project on Fair Representation, the Colorado Freedom Project, and a variety of other right wing groups.

Many of the upper level employees of these SPN groups hired over the last six years were likely placed in their positions by Talent Market. Bradley staff describes its activities,

“Over the past six years Talent Market has created and maintained a large database of individuals who would qualify for mid and senior level positions in a variety of conservative think tanks, grassroots and grasstops institutions, and development and communications organizations. This database serves as a source of information on candidate availability, appropriate salary ranges for vacant positions and candidate qualifications, relocation trends, hiring timelines and other information for hiring” (Donors Trust, Grant Proposal Record, 2/23/16).

The state litigation alliance “helps research and identify those states that have greatest potential for advancing state-constitutional law – then trains and, if asked, mentors attorneys who can either lead or staff existing or newly-created legal centers elsewhere, with an intensive ‘litigation boot camp’ for interested conscripts,” Bradley staff writes.

In all, Bradley has contributed $600,000 to the state litigation alliance because it “retains great potential to continue maximizing the benefit of Bradley’s much other recent strategic grantmaking to improve conservative infrastructures” (Goldwater Institute, Grant History Record, 11/10/14).

Recent job listings at Talent Market show that Executive Director Dixon is recruiting attorneys for the Texas Public Policy Foundation and the Washington-based Freedom Foundation, both also members of the litigation alliance.

Talent Market’s Mission statement states in italics that “We do not work in politics.” Yet the website lists “Politics/Campaigns” as one of its job categories and the work of SPN groups is often highly political. SPN groups funded by the Bradley Foundation, for instance, work to crush unions and turn blue states red.

“American Majority has trained 3,853 pro-freedom individuals at more than 100 training events. 208 trained candidates have run for state or local office, 181 advanced out of their primaries to the general election. 104 went on to win their elections. These include state legislators, 45 county board supervisors, 27 municipal office holders, 22 school board members and 5 judges.” (American Majority, Grant Proposal Record, 8/19/2014).

For all the up and coming libertarians interested in obtaining one of the “critical roles in the free-market universe,” be aware that Talent Market vets applicants for ideological purity.

When asked on the “proper function of government,” make sure you don’t choose “The government should play an active and powerful role in redistributing wealth, regulating economic activity, and ensuring the well-being of its citizens.”

Talent Market wants candidates to “protect property rights,” the well-being of its citizens does not even make the list.