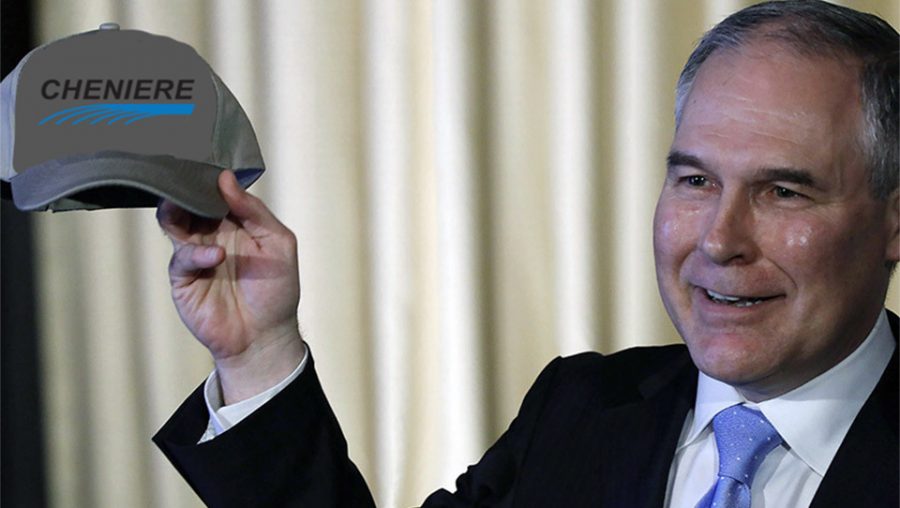 EPA Administrator Scott Pruitt has made headlines over the past week over revelations that he has been renting a townhouse from the wife of the lobbyist for Cheniere Energy for below-market cost. Cheniere is the nation’s largest exporter of liquefied natural gas (LNG), and landed a multi-billion contract to supply China’s market last November. The townhouse is owned by the wife of J. Steven Hart, who runs the lobbying firm that represents Cheniere and other fossil fuel corporations.

It has also been reported that, while enjoying the $50-per-night perks of his D.C. townhouse, Pruitt and members of his staff spent about $40,000 in taxpayer funds to fly to Morocco in December to help encourage the North African kingdom to import LNG from the United States, despite the fact that the EPA does not regulate LNG exports. Cheniere owns the only currently operational LNG export terminal, so Pruitt’s plug directly benefitted the company’s interests.

Cheniere paid Hart’s firm $80,000 in 2017 to lobby on “issues related to the export of liquefied natural gas (LNG), approval of LNG exports and export facilities.”

It is also well reported that Pruitt has numerous ties to organizations funded by the Kochs,  and that the Kochs spent millions to promote Pruitt’s nomination to head the EPA.

Now comes the interesting news that completes the circle. The Center for Media and Democracy has learned that Koch Industries bought shares in Cheniere Energy during the fourth quarter last year, around the time of Pruitt’s trip to Morocco. Koch still owns the shares.

Koch Industries is itself a major player in the LNG market, and is eagerly eyeing the global market.

Cheniere Energy has been a member of the Koch-funded American Legislative Exchange Council (ALEC), and has held a seat on the pay-to-play organization’s Energy task force.

An exclusive investigation conducted by DeSmogBlog in 2014 revealed that Cheniere acted as the lead corporate backer of the LNG exports ALEC model Resolution In Support of Expanded Liquefied Natural Gas Exports.