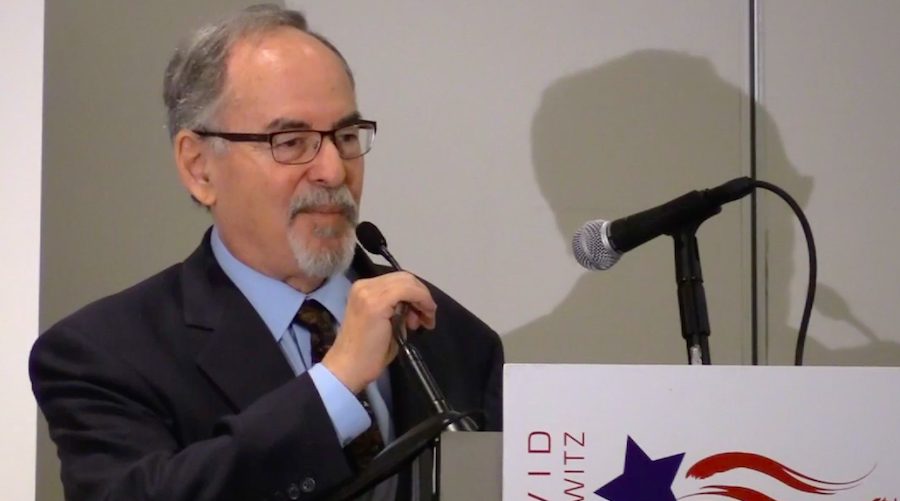 Wisconsin state Rep. Chris Taylor and the Center for Media and Democracy (CMD) received a threat of legal action from lawyers representing David Horowitz in August following the publication of Wisconsin Rep. Chris Taylor’s article, “ALEC in Disarray” on ExposedbyCMD.org and PR Watch.org.

Horowitz is the CEO and Founder of the David Horowitz Freedom Center and the online magazine FrontPageMag.com. The inflammatory website Jihad Watch is also a project of the Freedom Center.

In her article, Rep. Taylor criticized Horowitz for his comments at the American Legislative Exchange Council’s recent annual meeting in New Orleans, including his statement that “at the K-12 level, school curricula have been turned over to racist organizations like Black Lives Matter and terrorist organizations like the Muslim Brotherhood.” Citing research by the Southern Poverty Law Center (SPLC), Rep. Taylor described Horowitz as a “hatemonger” and “anti-Islamic.”

Horowitz’s legal team called that characterization “defamatory” and demanded an apology and a retraction. The letter threatening legal action appears to be a common bully tactic of the thin-skinned Horowitz, who threatened to sue a UCLA student on similar grounds in 2016.

Madison attorney Lester Pines sent a response on behalf of Rep. Taylor and CMD refuting Horowitz’s claims and standing by the accuracy of Rep. Taylor’s column. “Were your client to bring a suit for defamation against Representative Taylor or CMD, it would be dismissed as frivolous and they would seek attorneys’ fees and expenses,” Pines wrote.

SPCL has catalogued many of Horowitz’s statements in its “extremist file,” describing him as “a driving force of the anti-Muslim, anti-immigrant and anti-black movements.” SPLC also credits Horowitz for giving anti-Islamists a soap box saying, “Under Horowitz’s direction, the Freedom Center has launched a network of projects giving anti-Muslim voices and radical ideologies a platform to project hate and misinformation.”

Horowitz and his legal team impugned the credibility of SPLC in its letter, relying on an article published by the right-wing Manhattan Institute, a State Policy Network affiliate funded by the Koch brothers and the Bradley Foundation, and a 55-page pamphlet published by Horowitz’s Freedom Center, arguing that the SPLC is a “demagogic bully” and its assertions about Horowitz false.

Many respected observers, including the Washington Post and U.S. Senator Patrick Leahy have cited research conducted by the SPLC, as have professors in the fields of law, political science, and sociology. And SPLC is far from alone in its assessment of Horowitz. Multiple groups have denounced Horowitz’s blatant appeals to fear and prejudice to whip up anti-Muslim sentiment and discredit liberals. The Council on American-Islamic Relations lists the David Horowitz Freedom Center in its “inner core” of Islamophobic groups; People for the American Way criticizes Horowitz for the claim that “both Muslims and progressives abhor America and American values”; and the Center for American Progress Action Fund labels Horowitz as one of the “leading lights of the Islamophobia network.”

Researchers do not have to look far to find hatemongering rhetoric by Horowitz. In 2014, Horowitz said, “Obama is an anti-American radical and I’m actually sure he’s a Muslim, he certainly isn’t a Christian.”

In 2012, Horowitz called Clinton State Department aide Huma Abedin a “Muslim Brotherhood operative” on Fox News. When Megyn Kelly criticized this characterization, he insisted it was true before she cut him off.

Last month Twitter locked Horowitz’s account due to “hateful conduct.” According to his own publication, Front Page, Horowitz was blocked for tweeting, “But if you’re a Muslim, you might not want to be sworn in on a Judeo Christian bible, since Islam has conducted a 1500 year war against Christians and Jews, is calling for death to Israel and has slaughtered hundreds of thousands of Christians recently.”

UPDATE September 13 : After the publication of Rep. Chris Taylor’s piece “ALEC in Disarray,” David Horowitz threatened to sue Rep. Taylor and the Center for Media and Democracy (CMD). Our lawyer’s response to his frivolous complaint is here. About the same time, 78 good government and civil rights groups called upon ALEC companies to reject Horowitz’s inflammatory remarks and stop funding ALEC. Under pressure, ALEC issued a statement distancing themselves from Horowitz and announcing they would be taking down the video of one of his speeches at the 2018 ALEC Conference in New Orleans. To preserve the historical record, CMD has captured this speech and it can be accessed here. On September 15, the Intercept reported that Verizon dumped ALEC and issued a statement “Our company has no tolerance for racist, white supremacist or sexist comment or ideals.”