› Featured Investigations › Koch › Koch Brothers Are Watching You: And New Documents Reveal Just How Much They Know 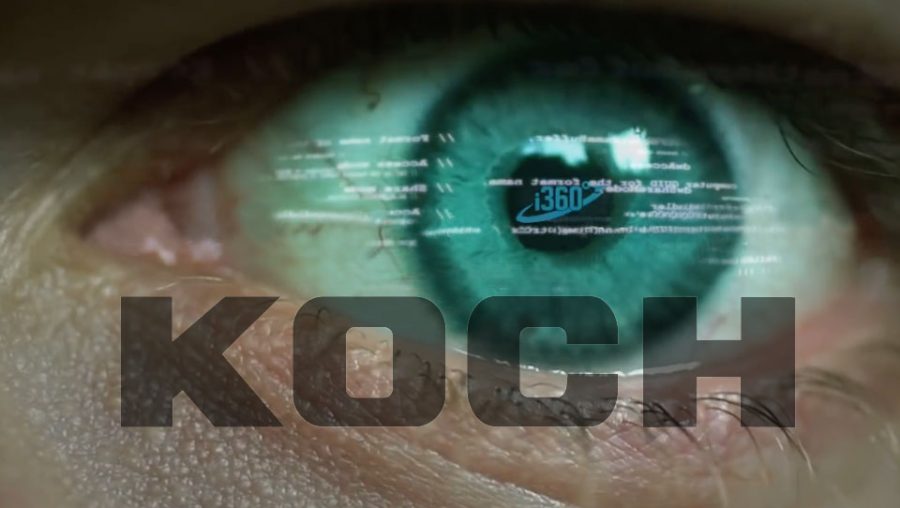 New documents uncovered by the Center for Media and Democracy show that the billionaire Koch brothers have developed detailed personality profiles on 89 percent of the U.S. population, and are using those profiles to launch an unprecedented private propaganda offensive to advance Republican candidates in the 2018 midterms.

The documents also show that the Kochs have developed persuasion models — like their “Heroin Model” and “Heroin Treatment Model” — that target voters with tailored messaging on select issues, and partner with cable and satellite TV providers to play those tailored messages during “regular” television broadcasts.

Over the last decade, big data and microtargeting have revolutionized political communications. And the Kochs, who are collectively worth $120 billion, now stand at the forefront of that revolution — investing billions in data aggregation, machine learning, software engineering, and Artificial Intelligence optimization.

In modern elections, incorporating AI into voter file maintenance has become a prerequisite to producing reliable data. The Kochs’ political data firm, i360 states that it has “been practicing AI for years. Our team of data scientists uses components of Machine learning, Deep Learning and Predictive Analytics, every day as they build and refine our predictive models.” [1]

Thanks to that investment (and the Supreme Court’s campaign finance rulings that opened the floodgates for super PACs), the Koch network is better-positioned than either the Democratic Party or the GOP to reach voters with their individually tailored communications.

That is a dangerous development, with potentially dramatic consequences for our democracy.

The Kochs formally entered the data space nine years ago, developing the “Themis Trust” program for the 2010 midterms — an uncommonly impactful election cycle where Republican operatives executed their REDMAP program and algorithmically gerrymandered congressional maps across the country in their favor.

In 2011, the Kochs folded Themis into a data competitor it acquired, i360 LLC, which was founded by Michael Palmer, the former chief technology officer of Senator McCain’s 2008 presidential campaign. Palmer still leads the organization.

Back then, as journalists Kenneth Vogel and Mike Allen documented, the Kochs’ long-term funding commitments to i360 allowed the organization to think bigger than their political competitors.

“Right now, we’re talking about and building things that you won’t see in 2016, because it’s not going to be ready until 2018,” Michael Palmer said in the wake of the 2014 midterm cycle.

Those programs are now operational. And according to a successful GOP campaign manager, i360 is the “best in the business” at providing Republicans with voter data.

i360’s client list reflects that data superiority. The country’s most notorious and effective political spenders, like the National Rifle Association, use the platform to identify and influence voters, as do Republican party committees, and U.S. House and Senate campaigns. 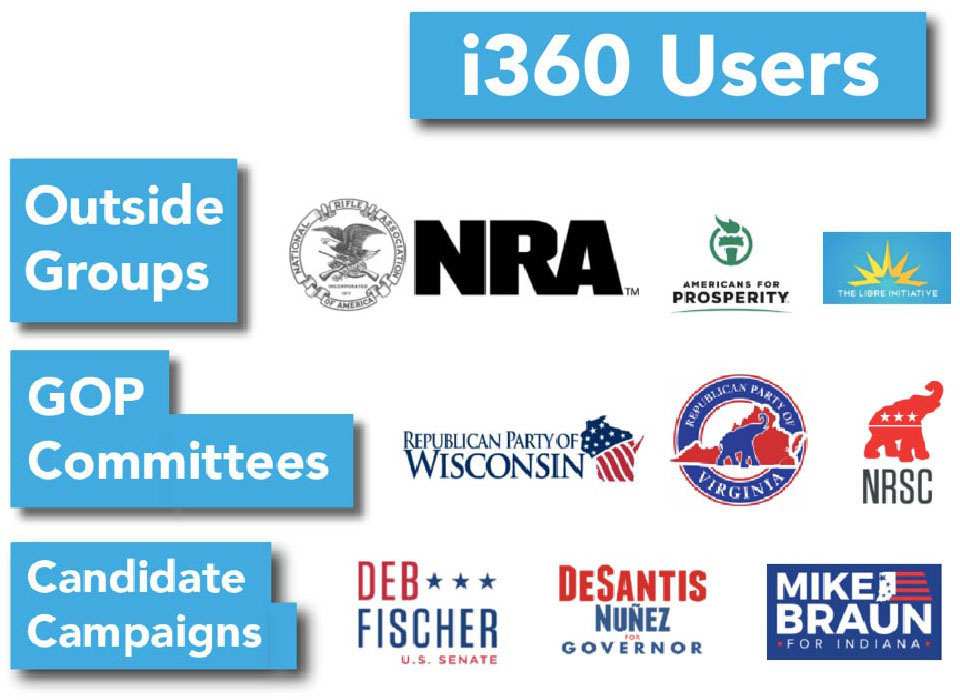 (A full list of i360’s clients is available here. Some clients, like the Republican Party of Wisconsin, have multiple sub-campaigns they run. It is also important to note that many Koch political groups, like Americans for Prosperity and the Libre Initiative, signed data sharing agreements with i360 in 2016 that are most likely still in effect.)

i360 sweetens the deal to its clients by offering its services at below-market rates. And once clients are locked into the i360 platform, they have access to the company’s voter file — the beating heart of modern political campaigns.

Conservatives agree that the Kochs are subsidizing i360. The losses they sustain by undercharging clients, however, are a pittance compared to the down-stream public policy returns and political power the Kochs receive from operating what amounts to a shadow political party in the United States — one that vigilantly guards the fossil fuel subsidies, deregulatory schemes, and regressive tax structures that enable Koch Industries to bring in $115 billion annually in private revenue.

Inside the i360 Voter File

i360’s voter file identifies “more than 199 million active voters and 290 million U.S. consumers,” and provides its users with up to 1,800 unique data points on each identified individual.

As a result, i360 and the Kochs know your vitals, ethnicity, religion, occupation, hobbies, shopping habits, political leanings, financial assets, marital status, and much more.

They know if you enjoy fishing — and if you do, whether you prefer salt or fresh water. They know if you have bladder control difficulty, get migraines, or have osteoporosis. They know which advertising mediums (radio, TV, internet, email) are the most effective. For you.

i360 has the following attribute tags, among hundreds of others, ranked 1-10, or subdivided otherwise in their voter file. 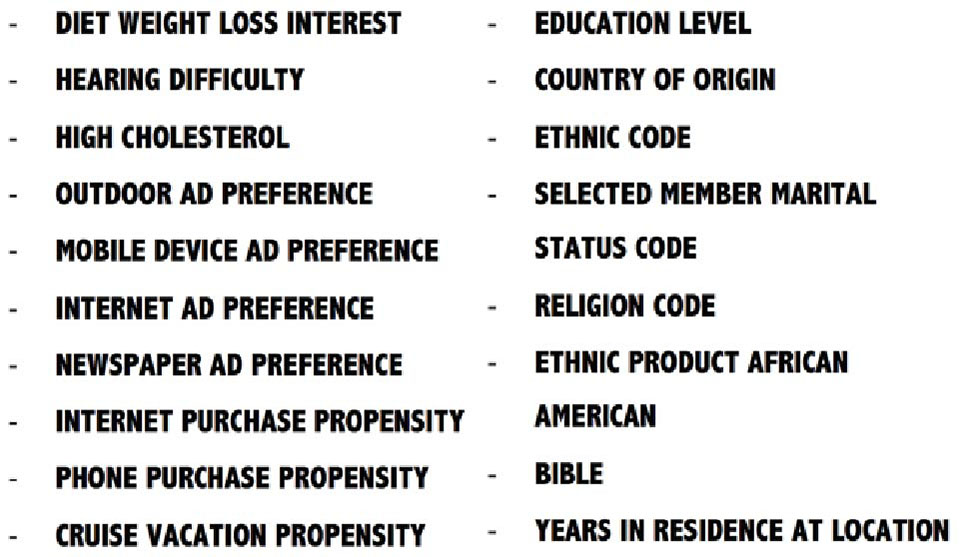 But i360 attribute codes are not limited to that 1-10 scale. Their knowledge of your financial standing is granular, from how much equity you have in your home to your net wealth and expendable income. 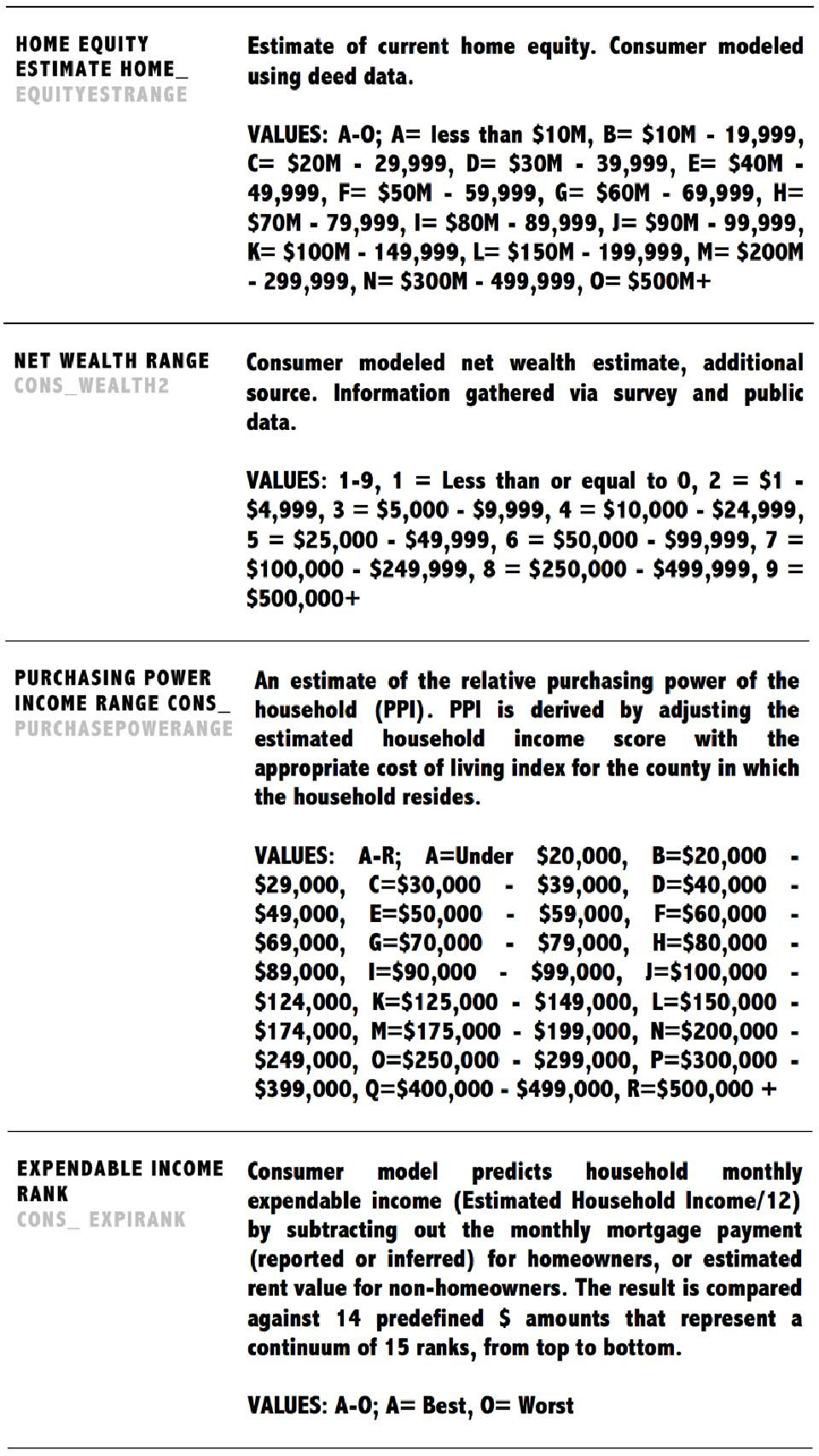 They know where you live, what your mortgage status is, and even how many bathrooms are in your house. 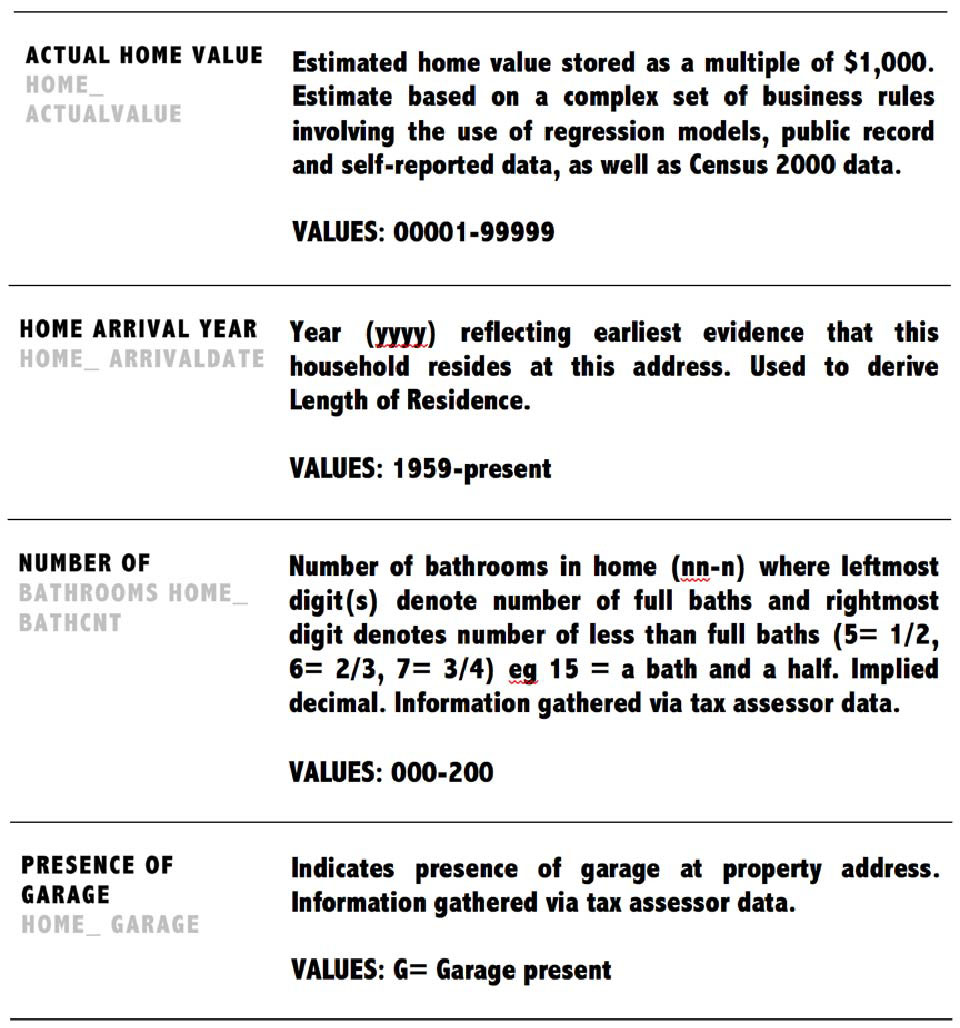 i360 has also created a set of 70 “clustercodes” to humanize its data for campaign operatives. These categories range from “Faded Blue Collars” to “Meandering Millennials,” and have flamboyant descriptions that correspond with their attribute headings.

Here are some examples:

Additionally, i360 has developed a series of persuasion models for its voter file. These models are often regionally sensitive — since voters have regional concerns — and are being used in federal elections and down-ballot races to assist Republicans across the country.

In 2016, i360 created a set of regional models while working with Senator Rob Portman’s 2016 re-election campaign. Portman started out the race polling 9 points behind his Democratic opponent, Governor Ted Strickland but ultimately won with 58 percent of the vote.

The company developed a model that could predict whether a voter supported Portman or Strickland with 89 percent accuracy, and others that predicted voter policy preferences. Well aware of the 2016 landscape, i360 also made a Trump/Clinton model, an Anti-Hillary model, and a Ticket Splitter model.

Much of i360’s success in the race, however, was linked to understanding (after conducting extensive polling) that a “key local issue facing Ohio was the opioid epidemic.” In response, the company created a “heroin model” and a “heroin treatment model” that were particularly effective at convincing voters to support Portman.

[T]he issue of opioid abuse was particularly complex in that it was relatively unknown whether it was considered a healthcare issue or a criminal justice issue. The answer to this would dictate the most effective messaging. In addition, this was a particularly personal issue affecting some voters and not others.

By leveraging two predictive models — the Heroin model identifying those constituents most likely to have been affected by the issue of opioid abuse and the Heroin Treatment model determining whether those individuals were more likely to view the issue as one of healthcare or of criminal justice — the campaign was able to effectively craft their messaging about Senator Portman’s extensive work in the Senate to be tailored to each individual according to their disposition on the topic.

This manipulation of the opioid crisis for political gain has a perverse irony given the Kochs’ long-running work to provide corporate interests, including healthcare and pharmaceutical interests, with undue political power and influence over public policy decisions. The Kochs have gifted over a million dollars to ALEC, for example, an organization that counts Purdue Pharma — the unconscionable manufacturer of OxyContin — as a member.

The company also stated it joined Portman’s campaign 21 months before the election, and that, “Together, i360 and the campaign strategized a plan to execute one of the most custom-targeted, integrated campaigns to date with a focus on getting the right message to the right voter wherever that might be.”

This is notable because during the 2016 election, i360 also ran $11.7 million worth of “independent” expenditures for the National Rifle Association Political Victory Fund, Freedom Partners Action Fund, and Americans For Prosperity in Portman’s race.

These outside spenders, two of which are Koch-funded groups, and Rob Portman’s campaign all used i360 to coordinate their digital marketing, phone banks, and television ad buys, in the same market, in the same election.

Additionally, i360 supplied Portman’s campaign with other issue-based models on gun control, gay marriage, and abortion that the company continues to supply to its clients in 2018.

Here are some examples of i360’s issue-based models:

The list goes on, but the structure stays the same. The Kochs are tailoring their advertising to you, because they know nearly everything about you.

[1] Less than two years ago, Koch Industries also acquired and invested $2 billion into Infor, a cloud computing company focused on business applications. And as the owners of a diversified conglomerate, the Kochs have worked for decades to maximize their supply chains by investing substantial capital into systems engineering and analysis.

This article was first published in Salon.