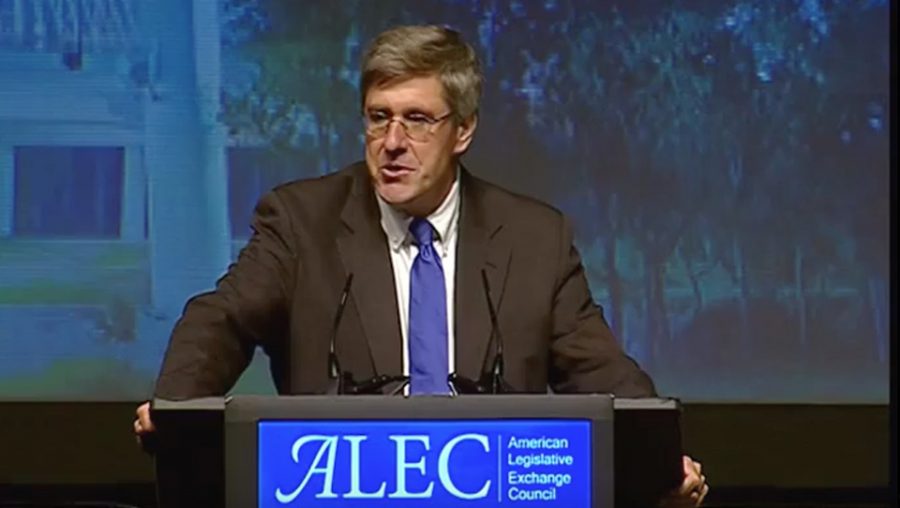 Stephen Moore, Trump’s recent appointment to the Federal Reserve Board, has served as the American Legislative Exchange Council’s (ALEC) leading voice for austerity and anti-labor policies for over a decade.

ALEC is a pay-to-play operation where legislators and corporate lobbyists meet behind closed doors to establish policies on issues that affect our lives, such as the environment, energy policy, and workers’ issues. Moore currently serves on ALEC’s “Private Enterprise Advisory Council” and the Board of Scholars. Since at least 2009, Moore has regularly attended the meetings where corporations script state policy.

Moore’s most well-known work with ALEC, “Rich States, Poor States” (RSPS), is one of the flagship documents supporting a conservative agenda in the states. For twelve years, Moore has co-authored the report, which serves as ALEC’s state scorecard for Koch-backed policies aimed at reducing taxes on the wealthy and corporations and suppressing wages.

ALEC’s RSPS report “provides a recipe for economic inequality, wage suppression, and stagnant incomes,” as well as for austerity for public infrastructure and education systems which “are the true foundations of long term economic growth and shared prosperity,” wrote economist Peter Fisher in a joint Good Jobs First and Iowa Policy Project report.

Moore now faces confirmation by the US Senate, which is expected to be a turbulent process, as he is widely considered unqualified to hold a position that would make him one of America’s most powerful officials for economic policy.

Moore has spoken at ALEC conferences every year since at least 2013. He was a featured speaker at ALEC’s 40th Annual Meeting; a keynote speaker at the 2014 ALEC Annual Meeting; he “talked ideas and policy” at the 2015 ALEC States and Nation Policy Summit; he had a “terrific time with dedicated state legislators” at an ALEC event in 2016; was on an ALEC panel in 2017 and promoted coal at the 2018 ALEC conference and answered questions about RSPS on a panel.

ALEC claims Moore is one of the “most well-respected free-market economists in America,” while Moore states “it is a great privilege” to be associated with ALEC. “Don’t you just know we are doing the right thing at ALEC, when we have these lunatics protesting against what we are doing?” Moore once said, presumably speaking of the multiple workers’ rights and environmental rights groups that protested the 2015 States and Nation Policy Summit in Scottsdale, Arizona.

Moore’s speaking engagements have predominantly focused on RSPS, which ALEC calls its “economic outlook of states.” Moore is frequently called to ALEC meetings to discuss the yearly report he and his co-authors — ALEC Chief Economist Jonathan Williams and Reagan-alum economist Dr. Arthur B. Laffer — research together.

ALEC’s flagship report has been derided by experts as “silly,” “highly misleading,” and the “gold standard in bogus economic policy claims.” As the Center for Media and Democracy (CMD) reported in 2015, RSPC “slaps a fresh coat of paint on the flawed fiscal and economic austerity policies favored by the group and its corporate patrons.”

Menzie Chinn, an economist at the University of Wisconsin-Madison, reviewed ALEC’s RSPS reports and concluded that the data did not back-up ALEC’s claims. The “bottom line,” according to Chinn’s findings, is that the ALEC rankings are “not correlated with real [gross state product] growth, either short term or media term.”

Chinn told CMD that the conclusions of the 2015 econometric assessment are still likely true today and that he agrees with the conclusions of Good Jobs First and the Iowa Policy Project in their 2012 report on ALEC’s deeply flawed methodology. According to that report, “Selling Snake Oil to the States,” ALEC’s RSPS “consistently ignores decades of published research making broad, unsubstantiated claims and often using anecdotes or spurious two-factor correlations that fail to control for obviously relevant factors.” RSPS relies on a “methodologically primitive analysis that any student taking Statistics 101 would be taught to avoid,” the report concluded.

Moore often uses migration numbers as people “voting with their feet” as evidence for their economic policy preferences. But Chinn says that this method of analysis is fraught as it does not control for many factors at play. Marshall Steinbaum, a fellow at the Roosevelt Institute, called Moore’s premise of people moving from blue states to red states “some sort of fantasy.”

RSPS “embodies the policy agenda that ALEC pushes to state legislators” according to the Iowa Policy Project’s “Grading of the States.” That site was created by Fisher, an economist who is currently the Research Director at Iowa Policy Project, to cover business climate rankings. Grading of the States says despite ALEC’s claims that “these policies promote economic growth and prosperity, the evidence shows otherwise.”

Kansas is one data point of the evidence Grading of the States mentions. As CMD reported in 2016, ALEC-backed policies in Kansas have resulted in a widening of the income inequality gap “by shifting income to the state’s wealthiest taxpayers and corporations, while suppressing wages and cutting services for the middle class, low-income children, and veterans.”

Despite praise from ALEC claiming “no one is more qualified than Stephen Moore for this position,” Stephen Moore would be alone on the Federal Reserve Board as the only member without a doctorate degree. Moore has never worked within academia. And, as pointed out by Chinn, Moore has never been published in a peer-reviewed journal.

Instead, Moore has climbed the ranks within conservative think-tanks and political groups. He founded Club for Growth, and has worked as a senior fellow at the Cato Institute, a visiting fellow at the Heritage Foundation, a senior economic contributor at FreedomWorks, a board member of the Donors Capital Fund, a research director for President Ronald Reagan’s Commission on Privatization, and with many other right-wing organizations.

“Stephen Moore is little more than a fairly inept polemicist. I’ve never seen anything written by him that could be construed as ‘research’ in an academic/policy sense,” Chinn told CMD. Pointing at his lack of a doctorate in the field, Chinn opined, “perhaps he has an excuse, given his limited economics training,” but Moore’s “use of incorrect or outdated data suggests deeper issues.”

Economists Say Moore Is Not Qualified

Moore “is a terrible, horrible, no good, very bad pick. He hasn’t gotten a thing right in twenty years,” Justin Wolfers, an economics professor at the University of Michigan, tweeted.

Wolfers is not alone. Greg Mankiw, a Harvard professor who was chairman of the White House Council of Economic Advisers under George W. Bush and is considered a “leading Republican economist,” said Moore “does not have the intellectual gravitas for this important job.”

Moore himself said, “I’m kind of new to this game, frankly, so I’m going to be on a steep learning curve myself about how the Fed operates, how the Federal Reserve makes its decisions,” according to Bloomberg. “It’s hard for me to say even what my role will be there, assuming I get confirmed.”

Trump also recently appointed “former pizza magnate turned failed Republican presidential candidate” Herman Cain to the Fed. However, according to ABC News, Cain is expected to withdraw his name from consideration in the coming days after four GOP senators indicated they would not vote to confirm him. The next step in the confirmation process is vetting from the Senate Committee on Banking, chaired by Idaho Republican Mike Crapo.