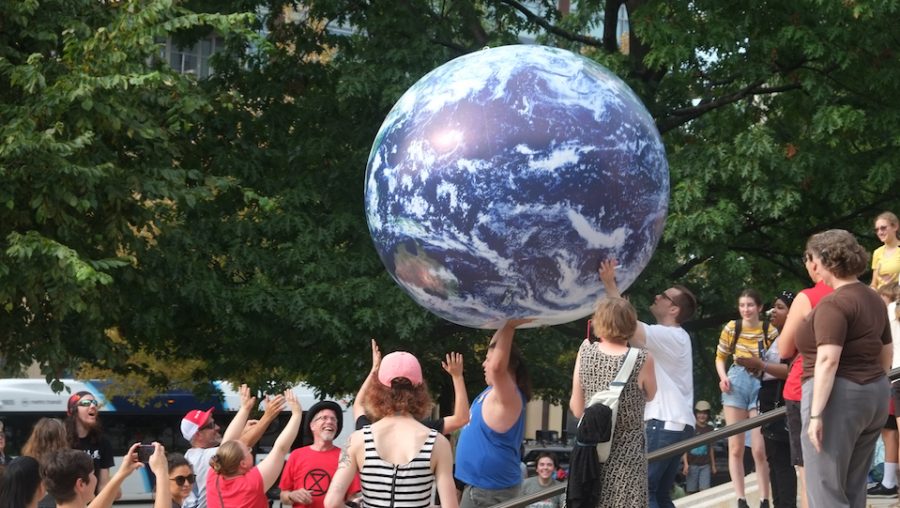 The Wisconsin State Assembly will convene for the first time this fall today to consider a bill backed by the oil industry and the American Legislative Exchange Council (ALEC) that would impose harsh criminal penalties on protesters who trespass on or damage any property owned by energy and water companies.

Dubbed the “The Worker Safety and Energy Security Act,” AB 426 passed unanimously out of committee on October 2. The Senate version of the bill, SB 386, is still pending in committee.

The bill would expand a law passed in 2015 that made it a felony to trespass on or damage property owned, operated, or leased by an electrical or gas company to cover water, oil, petroleum, and renewable fuel companies’ properties, as the Center for Media and Democracy (CMD) first reported.

Protestors found guilty under the proposed changes could receive up to six years in prison, a maximum fine of $10,000, or both, for protesting on an energy company’s property if the penalty under current law stays intact. And, because the bill would apply to all property owned held by the oil and gas industry in Wisconsin, protesters would face the same penalties for demonstrating at corporate headquarters as they would for demonstrating at a pipeline or other “critical infrastructure.”

The bill is based on ALEC’s “Critical Infrastructure Protection Act” and is backed by the American Petroleum Institute (API), the American Chemistry Council, and a number of other business associations and labor unions, which secured an exemption for picketing around labor disputes.

Testimony in favor of the bill at its public hearing on September 26 focused on preventing the destruction of property and violence against workers, with few, if any, addressing the drastic implications for peaceful protestors.

Rep. Jason Fields (D-Milwaukee), a co-sponsor of the legislation, complained about the criticism he received due to his support. Calling it “appalling,” Fields advocated for protestors to follow the nonviolent methods employed by Martin Luther King, Jr, while at the same time ignoring that Dr. King’s peaceful protests would have triggered a felony violation under the bill.

The bill’s 2018 “Drafting Requests,” obtained by Documented, show that the initial topic for the bill was, “Trespassing on the property of an energy provider,” signaling that lawmakers were locked in on criminalizing protests from the get-go.

Rep. Mike Kuglitch (R-New Berlin), chair of the Committee on Energy and Utilities, submitted a request on the same day as lead sponsor Rep. David Steffen (R-Green Bay). Kuglitch, an ALEC member who sits on its Energy, Environment and Agriculture task force, submitted a draft that, like ALEC’s bill, would have gone even further by imposing damages on any person or group that helps or even advises protesters who trespass on or damage energy industry property.

While that draconian provision was ultimately dropped from the bill, environmental groups may still be on the hook given Wisconsin’s broad conspiracy law.

In addition to bankrolling ALEC and holding a seat on its corporate board, Koch Industries has kept a close eye on the Wisconsin bill to criminalize environmental protests.

The document, “put together for labor” by API Consulting Director Dan Gunderson, focuses on “well-coordinated and well-funded” attacks from out-of-state protesters, and warns that, “Without stronger enforcement, Wisconsin might become the target state of choice for pipeline disruptions.”

Also included on the email are Andrew Cook of Hamilton Consulting, which represents Koch Industries, Koch subsidiary Flint Hills Resources, and Xcel Energy, along with two lobbyists for Arena Strategy, and Marcus Bentley.

Marcus Bentley appears to have been hired by API to lead the effort on this bill, including convincing Democrats and unions to get on board, as CMD reported.

Wisconsin Industrial Energy Group and Wisconsin Paper Council were also exposed by CMD as lobbying for this bill, and count the Koch’s subsidiary Georgia-Pacific as a member.