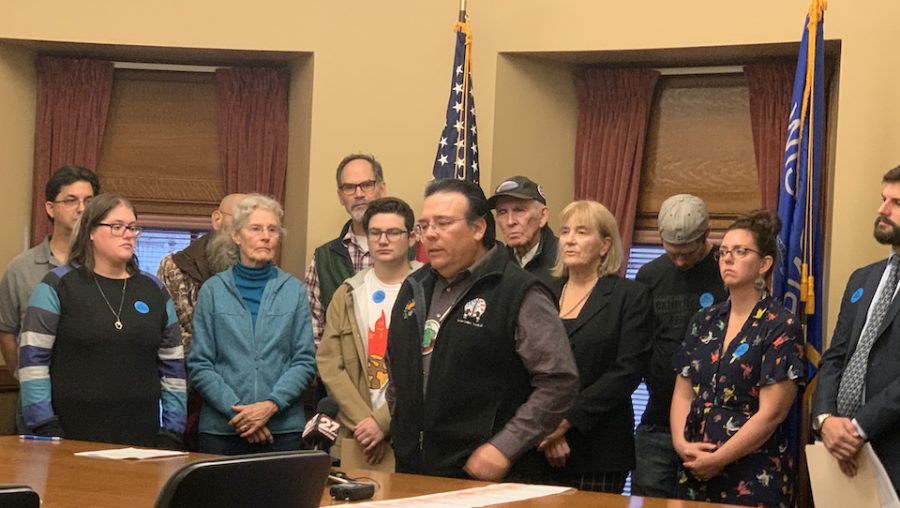 The Wisconsin State Senate passed a bill aimed at criminalizing environmental protests by a voice vote yesterday, and it now heads to Gov. Tony Evers’s (D) desk to sign or veto.

Dubbed “The Worker Safety and Energy Security Act” (AB 426) to garner labor support, the bill would expand a 2015 law to make trespassing on or damaging any energy or water company property a felony punishable by up to six years in prison and a $10,000 fine.

AB 426 was inspired by the American Legislative Exchange Council (ALEC)’s “Critical Infrastructure Protection Act” and was carefully pushed through the legislature with the help of lobbyists from the American Petroleum Institute, the largest trade association for the oil and gas industry.

According to University of Wisconsin-Lacrosse emeritus professor Al Gedicks, the bill “is an attempt to silence environmental and clean energy activists with the threat of felony charges for peaceful protest against pipelines and other energy infrastructure, including corporate headquarters.”

In light of the worker safety rationale claimed by the bill’s sponsors, Sen. Chris Larson (D-Milwaukee) introduced a floor amendment to the anti-protest bill that would have required trespass to be made “with the intent to present a substantial threat of bodily harm to one or more persons” in order to trigger a felony violation.

Sen. Larson argued on the floor that,

“To be clear, trespassing is already a crime and this is just saying that, if your intent is to say we’re making sure that workers are protected and those who are working on the site are protected and it’s not just the intent to protect big energy companies from peaceful protest, then this would make sure that that amendment covers that.”

The amendment was intended “to make sure that we continue to preserve something that is a traditional American value, which is dissent, which is to have protests whether you agree with it or not,” Sen. Larson said.

Sen. Larson’s amendment was rejected by a vote of 19-14 along party lines. AB 426 was then voted on and passed, with only Sen. Fred Risser (D-Madison) asking for his vote to be recorded as a no.

In its registered testimony, ACLU wrote, “The broadening of definitions in SB386/AB426 to the extent that people may now be subject to felony prosecution for previously acceptable activities that do not endanger the integrity or operation of energy infrastructure is deeply problematic, and we urge you to vote no on these bills.”

“While advertised as an effort to protect Wisconsin’s infrastructure, the real impact of this bill would be to criminalize peaceful protesters and suppress the freedom of speech,” said Chris Ott, ACLU of Wisconsin’s executive director. “The Constitution firmly protects protests even when — and especially when — they stir anger, challenge government policy, and express dissatisfaction with the status quo. Anti-protest bills like AB 426 threaten these fundamental rights by criminalizing peaceful demonstrators for making their voices heard.”

The opposition movement will now appeal to Gov. Evers to veto this bill.

“Over and over, we’ve seen peaceful, nonviolent protests met with militarization, threats of violence and actual violence from some of these corporate mechanisms,” said Mike Wiggins, Chairman of the Bad River Band of Lake Superior Chippewa. “And in reality, this bill sends a message and sends a dagger into a constitutional right, the First Amendment right in that whole notion of peaceful, nonviolent gathering.”