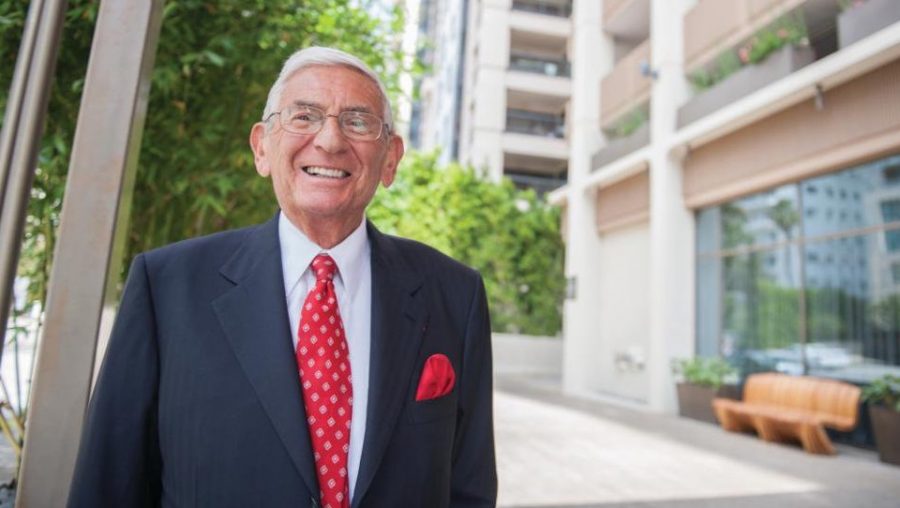 This piece was first published on Mercedes Schneider’s blog here.

Eli Broad is one of the chief billionaires pushing education reform.

In 2017, Broad “inserted himself” in the Los Angeles School Board race via the largest contribution to an individual candidate — $100K. Two years earlier, in 2015, Broad was caught planning an “initiative” to put half of LA’s students in charter schools over an eight-year period. (The plan was leaked to the New York Times.)

One year prior to that — 2014 — Broad approached US Ed. Sec. Arne Duncan’s speech writer, Peter Cunningham, about creating a billionaire-funded, ed-reform blog to defend ed reformers against “being piled on” by non-funded, grass-roots-emergent, pro-traditional-public-ed bloggers. (Sad but true.)

And in 2011, Broad donated $25M to help make the teacher-temp org, Teach for America (TFA), a permanent training program for those temp teachers. (Ironic to work to make TFA permanent so that it could permanently churn out temporary teachers.)

(Aside: A keyword search of “teach for america” on the Broad Center alumni site produces hits for another 37 Broad alumni connected to TFA, and I can see that the list is not exhaustive.)

And now, it appears that Broad has bought a piece of Yale — a $100M piece.

On December  05, 2019, the Yale School of Management announced that it “received the largest gift in its history from the Broad Foundation,” but it’s not a gift, really.

It’s a purchase: the Broad Center at Yale School of Management (SOM).

Broad is moving his operation from Los Angeles to Yale.

Same ed-reform story, with a facelift– and a new address that repackages the Broad ed reform push in a gloss of heightened prestige. From the Yale SOM press release:

The $100 million gift will fund The Broad Center at the Yale School of Management and enable the creation of a tuition-free master’s degree program for emerging education leaders, advanced leadership training for top school system executives, and an extensive research endeavor aimed at assembling the premier collection of data on public education leadership.

The Broad Center at Yale SOM will become a platform for reimagining how skilled management practices can improve the performance of public school districts and thereby create benefits for schools, students, teachers, administrators, and communities across the country. The center will advance the strategic direction pioneered by The Broad Center over the last 20 years; its placement at the Yale School of Management will enable its programs to draw on the input of management and business scholars and the resources of Yale University.

And here is an excerpt from the December  05, 2019, Broad Center press release:

Los Angeles, CA — With a gift of $100 million to Yale University, The Broad Foundation today reaffirms its commitment to public K-12 education and makes possible the launch of a major new initiative of the Yale School of Management focused on strengthening leadership in public education. Building on transformative work by The Broad Center in Los Angeles, the initiative will ensure in perpetuity high-impact programs to advance excellence and equity in education.

The Broad Center at Yale SOM will develop research, teaching, and policy initiatives devoted to improving the effectiveness of top leaders in America’s public school systems. The ambitious initiative will leverage Yale SOM’s expertise in delivering rigorous management education to talented professionals in fields that have broad societal impact, while furthering and amplifying the previously independent Broad Center’s mission of ensuring high-quality leadership in public education.