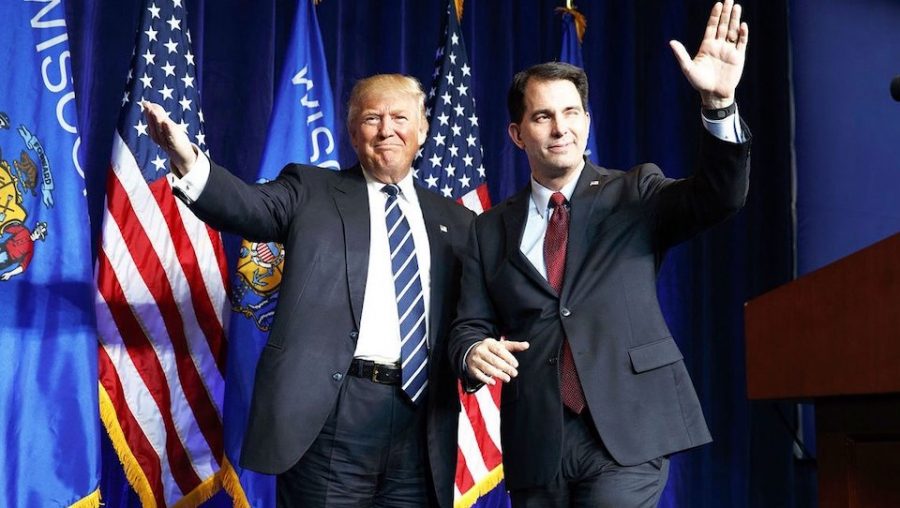 IWV, a 501(c)(4) social welfare organization, claims its efforts not only impacted the results of the 2016 elections, but also aided former Governor Scott Walker’s recall election in 2012.

IWV boasts that Trump would have received an estimated 215,840 fewer votes in Wisconsin if it had not executed its quiz messaging campaign targeting 1.54 million voters. However, much of that messaging was conducted by IWV’s affiliated 501(c)(3) partner, IWF, which is prohibited by federal law from participating or intervening in elections.

“Overstating your impact is something of a tradition by political creatures, but the prospect of a D.C. group with little name recognition and even less donor transparency achieving even a fraction of its claims in our elections should give any reasonable person pause,” co-author and TNR’s executive director Lisa Graves writes in The Cap Times.

The Washington, D.C.-based groups did their electioneering from afar, without opening an office in the state, allowing them to avoid public scrutiny and the press.

“People in Wisconsin and elsewhere need to know about this right-wing group that uses its ‘independent’ brand name to pretend to be independent in order to sway women voters who are independent,” Graves told the Center for Media and Democracy (CMD). “I don’t think it would be prudent to underestimate the resolve or impact of the Independent Women’s Voice on elections. Higgins is a touted strategist for the rightwing and called the election for Trump when others were dismissing him, in part based on her assessment of independent and conservative women. I fully expect her groups to spend substantial sums deploying her quiz strategy in target states in 2020.”

“It’s also troubling that the group is funded largely by dark money sources, in addition to the notoriously divisive Diane Hendricks,” Graves said. “IWV has run its playbook of quiz calls and other voter outreach coordinated with its 501(c)(3), IWF, in recent elections, so it’s reasonable to expect that it would attempt to do so in 2020 in Wisconsin and other states–especially with Heather Higgins efforts to promote Trump.”

Graves is also board president for CMD.

Trump beat Clinton by just 22,748 votes in 2016 in an election that saw the lowest turnout in the Badger state since 2000, and Wisconsin is again expected to be a battleground state this year.

The report authored by Graves and researcher Evan Vorpahl shows that IWF/V used “quiz calls,” postcards, and other unconfirmed digital outreach strategies to target Wisconsin’s “independent women” and “GOP-leaning” women that did not mention political parties or candidates.

IWF/V quizzed voters on the Affordable Care Act’s effects on their lives, and IWF sent two mailings on the ACA to 880,000 households in Wisconsin. IWV later sent postcards linking the Supreme Court fight over Obama’s nominee to the nation’s highest court Merrick Garland to the presidential election. Senate Majority leader Mitch McConnell (R-SC) refused to give Obama’s nominee a confirmation hearing in 2016.

And then on election eve, IWV sent another quiz to voters that tied the election to the ACA.

Truth North learned about IWF/V’s efforts in 2016 through a “confidential document” it obtained prepared by University of Texas-Austin’s Professor Daron Shaw in late 2016 and early 2017. The professor was approached by IWF/V’s Heather Higgins to prepare the report with data she had that suggested quizzes might be influential, Shaw told CMD.

“I don’t know that anyone has scientifically tested the impact of information given in the form of quizzes on political or issue-specific knowledge. It’s a mode-test, but a truly intriguing one,” Shaw said.

Higgins, who fundraises on the claim that IWV’s efforts “have been decisive in elections,” is chairwoman of IWF and CEO of IWV. Higgins is also heiress to the family fortune from the corporation famous for Vicks vapor rub and the only U.S. distributor of Thalidomide, a chemical that caused severe malformations in the limbs of babies born to women who ingested it.

According to Shaw, Higgins did not pay him for the report, and this was the only work he did for her. After reviewing the data, Shaw found that,

“[E]ven relatively modest quiz messaging can have an impact on people, especially with respect to their knowledge of issue and policy arguments. However, to persuade people about the salience of the issue, or to move broader attitudes on the issue, it seems that multiple ‘touches’ and different modes of outreach are necessary, as we saw in the Wisconsin test.”

TNR’s report highlights that the quizzes on the ACA and the Supreme Court were effective in getting men and women to vote for Trump, quoting Shaw, who said, “In Wisconsin, our models tell us that exposure to the [quiz call + mailing] treatment made men 11 points more likely to support Trump over Clinton; the same exposure made women 17 points more likely to support Trump.”

Shaw told CMD that, “By the standards of political science, the estimated issue knowledge and issue salience effects in the Wisconsin test are large. I’m [a] big believer in trusting the data, but I would also (always) advise caution; effects were less robust in other tests and sample sizes for many of the sub-group findings are not as powerful as they would be in an ideal world.”

In any event, Higgins took Shaw’s conclusions and boasted of IWF/V’s effectiveness, saying, “Had IWV’s educational messaging not occurred, Trump would have received an estimated 215,840 fewer votes in Wisconsin, the state completely written off by all the political professionals.”

CMD asked Barry Burden, Professor of Political Science and Director of the Elections Research Center at the University of Wisconsin-Madison for his take on Shaw’s study. “The intervention that took place during the 2016 presidential election campaign might well have influenced public opinion and voting intentions,” Burden said, “but the analysis suffers from a number of limitations that raise doubts about exactly what the effects were.”

Exact costs of the campaign in Wisconsin were not disclosed by IWF/V. Nationwide, TNR reports that the two groups spent more than $3.7 million on “active engagement” in 2016.

CMD asked former Director of the Exempt Organizations Division of the Internal Revenue Service Marcus Owen to review TNR’s report and to comment on the legality of IWF/V’s activities.

“Section 501(c)(3) of the Internal Revenue Code prohibits tax-exempt charities, such as the Independent Women’s Forum, from engaging in partisan electioneering, whether directly or indirectly through intermediaries,” Owens said. “What the True North report reveals is a sophisticated IWF strategy to influence the outcome of elections using carefully skewed messages to target unsuspecting voters.”

“The IRS has issued guidance, in Revenue Ruling 2007-41, noting that charities ‘must avoid any issue advocacy that functions as political campaign intervention,’ and further noting that such intervention can occur ‘even if a statement does not expressly tell an audience to vote for or against a specific candidate,’” Owens said.

IWV Boasts that it Influenced the Walker Recall Vote in 2012

TNR’s report reveals that IWV also is taking credit publicly for Walker’s win in his 2012 recall election. After the former governor pushed and signed legislation severely limiting the collective bargaining rights of public employees, he became the only governor to face a recall election and to survive it.

Walker raised $37 million for the recall election and spent $36 million. His challenger, Democrat Tom Barrett, raised less than one fifth of that, about $6.5 million total.

According to Higgins, IWV targeted Wisconsin voters using “interactive phone calls, postcards with questionnaires, and targeted online advertising,” after it found that independents that opposed Walker believed that public employees are underpaid and sacrifice money to stay in their positions.

“Through our educational program, we changed this foundational belief into an understanding that unionized public employees are overcompensated relative to the private sector,” IWV claims.

Higgins boasted of this in a speech to CPAC in 2015. IWV launched a website, “isthatreallyfair.org,” as part of the effort, which also includes a quiz.

It is unclear how much the 2012 effort cost Higgins’s groups, and since IWF/V are not required to disclose funders under the tax code, there is no telling who bankrolled the effort.

However, IWF/V have a number of politically active partners in Wisconsin with big wallets. In 2017, IWF/V honored GOP megadonor and owner of ABC Supply and Hendricks Holding Company Diane Hendricks as its “Outstanding Woman in Business.” TNR notes that Hendricks was a top donor of IWF’s 2017 and 2018 galas.

Hendricks was one of Walker’s top donors and is a top donor to Republicans in the state, giving $4.7 million to the Wisconsin Republican Party between 1998 and 2018. Hendricks also serves on the board of the Milwaukee-based Lynde and Harry Bradley Foundation, which since 2011 has contributed $875,000 to IWF.  Bradley’s donor conduit, the Bradley Impact Fund (BIF) chipped in another $40,000 to IWF.

An internal Bradley spreadsheet detailing matching grants also shows that Hendricks gave $2 million for “Wisconsin based C(3) efforts” in 2011. IWF is a 501(c)(3).

Hendricks’s co-director on the BIF’s board of directors, Steven Einhorn, contributed $10,000 to IWF through his Einhorn Family Foundation in 2013, the year after the recall election.

Bradley gave $10,000 to Einhorn’s Foundation in 2010 to place controversial billboards in Milwaukee, Cleveland, and Columbus, Ohio, featuring threatening messages about voter fraud stating that “Voter Fraud is a Felony! 3 1/2 years & 10,000 dollar fine.” At the time, the president and CEO of the Bradley Foundation, Michael Grebe, was Walker’s campaign chairman.

The Einhorn Foundation admitted to being behind the billboards.

Nancy and Steve Einhorn are listed as attendees to the 2017 IWF gala honoring Hendricks, as is Bradley board member Cleta Mitchell.

The late Terry Kohler and his wife Mary Kohler, major contributors to the Republican Party, added another $8,000 to IWF through their Windway Foundation (since renamed the Terry Kohler Family Foundation). Mary Kohler gave to IWF independently as well, internal documents from Bradley show.

Terry Kohler was a major funder of Club for Growth, which spent “$9.1 million during the 2011 and 2012 recalls,” and the Republican Governors Association, which spent another $9.4 million supporting Walker.

As registered nonprofits, IWF and IWV are not required by law to disclose their funders, but through a search of other nonprofit filings, CMD was able to uncover grants to the two groups.

“In the past 18 months, [IWF] has received support from individuals, corporations, and foundations totaling 60 in number,” Bradley staff note in a document from February 2014.

CMD has identified 28 foundations and donor conduits that have contributed a combined $8 million to IWF between 2011 and 2018. In its most recent 2018 tax filing, IWF details $3.2 million in revenue, over a million more than it brought in the year before.

$4.2 million was given to IWF through the Koch political network’s preferred donor advised funds, DonorsTrust and Donors Capital Fund. DonorsTrust pumped $142 million into right-wing causes in 2018, CMD has reported.

In looking at FEC filings, Graves found that 89 percent of IWV’s known funders were men. CMD found six funders to IWV that gave $4.8 million between 2011 and 2018 in IRS filings. Of the six, three are part of Leonard Leo’s dark money network utilized to promote Trump’s judges: 45Committee, Freedom and Opportunity Fund, and Judicial Crisis Network.

“IWV was vociferous in its defense of [Brett] Kavanaugh, who was accused of sexual assault by Christine Blasey Ford, a Stanford professor who knew the justice while he was in prep school,” the Center for Responsive Politics reported. “IWV’s president, Tammy Bruce, said on Fox News last year that Kavanaugh was ‘effectively being used as a stand-in for all perpetrators.'”

In all, the three Leo groups have given IWV $4.2 million.

IWV disclosed $2.1 million in revenue in its most recently filed 2018 IRS filing.