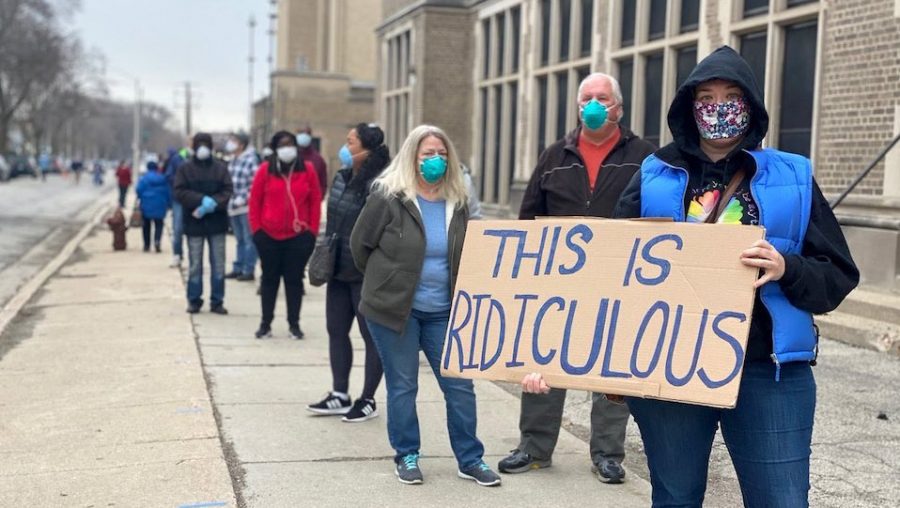 Yesterday Wisconsinites stood in long lines for as long as two hours with very few (if any) poll workers outside to ensure voters maintained social distancing requirements, making it painfully clear that all three branches of government in this great state failed the people they swore to serve.

Some have compared the fight against coronavirus to a war against an invisible enemy. Using this analogy, it not hard to conceive with 2,578 confirmed cases already that the collateral damage from sending voters out to polling places will be more unnecessary deaths.

Signaling a new low of extreme partisan politics here, the coronavirus was weaponized by Republican legislative leadership and the Wisconsin Supreme Court against voters for no other explicable reason than maintaining conservatives’ 5-2 lock on the state’s highest court.

Just three weeks ago, with the coronavirus numbers mounting in the state and Ohio’s Governor Mike DeWine (R) closing polls for its March 17 primary, Governor Tony Evers (D) declined to postpone the primary, despite calls from former Governor Tommy Thompson (R) and Milwaukee County Executive Chris Abele (D) to do so, saying “How long do we potentially leave offices unfilled because we’re into July or August and we haven’t held a general election?”

In the weeks since, Evers would walk back his position, advocating for closing the polls and sending ballots directly to all registered voters, and then, on Monday morning, using an executive order to delay the election till June.

Given the large number of absentee ballot returns in Democratic strongholds of Milwaukee and Dane counties as the primary approached, Republicans saw no other path to victory for their beloved Walker-appointed Justice Daniel Kelly, whose campaign shares an address with the State Republican Party, than through in-person voting.

So when the governor called the legislature back in for a special session on Saturday to stop in-person voting, Assembly Speaker Robin Vos (R) and Senate Majority Leader Scott Fitzgerald (R) ignored his call. And when Evers delayed the primary yesterday, Vos and Fitzgerald immediately asked the Supreme Court to block it.

This isn’t the first time Wisconsin’s Republican lawmakers have gone to extreme measures to rig the Supreme Court election. In a lame duck session in December 2018, Republicans attempted to move the Presidential primary to March 2020 to ensure a lower turnout for the Supreme Court election, but ultimately decided against it because it would cost taxpayers $7 million and county clerks opposed it unanimously.

The Supreme Court overturned the governor’s order on Monday within hours along ideological lines, 4-2. Kelly recused himself, but made sure to weigh in via Twitter, tweeting “We can do two things at the same time: maintain the foundations of our democracy while taking reasonable precautions to keep people safe.”

Seemingly unaware of the dark irony, the Court reached its decision by meeting online — for health reasons — while forcing more than three million voters to choose between exercising their right to vote and staying safe.

Two of the four justices who ruled in favor of keeping the polls have publicly supported Daniel Kelly in the race.

Justice Brian Hagedorn, the newest member to the court, spoke at Koch-backed Americans for Prosperity (AFP) events around the state on the “Proper Role of the Courts.” AFP endorsed Kelly in the race and its “activists” have been campaigning on his behalf.

A voter guide produced by Wisconsin Family Action, an influential Christian Right group, lists Hagedorn as endorsing Kelly, and he and Justice Rebecca Bradley released a statement in favor of retaining Kelly, writing “We are absolutely confident that we need his integrity and intellect to continue on the Court.”

The statement was in response to Kelly’s challenger, Dane County Judge Jill Karofsky’s characterization of Kelly as “corrupt” for consistently voting in favor of conservative interests in lock-step with the Court’s right-wing majority.

And so yesterday Wisconsin voters were forced to brave a worldwide coronavirus pandemic that has killed close to 100 people in Wisconsin and over 12,000 across the country just to exercise their right to vote in an election that could have been moved or done by mail-in ballots. The other two states with April primaries, Alaska and Wyoming, canceled in-person voting and are conducting their elections entirely by mail.

After more die from contracting the coronavirus at the polls — and experts tell us they will — hopefully Evers, Vos, and Fitzgerald will work together to a hold a safer election in November.