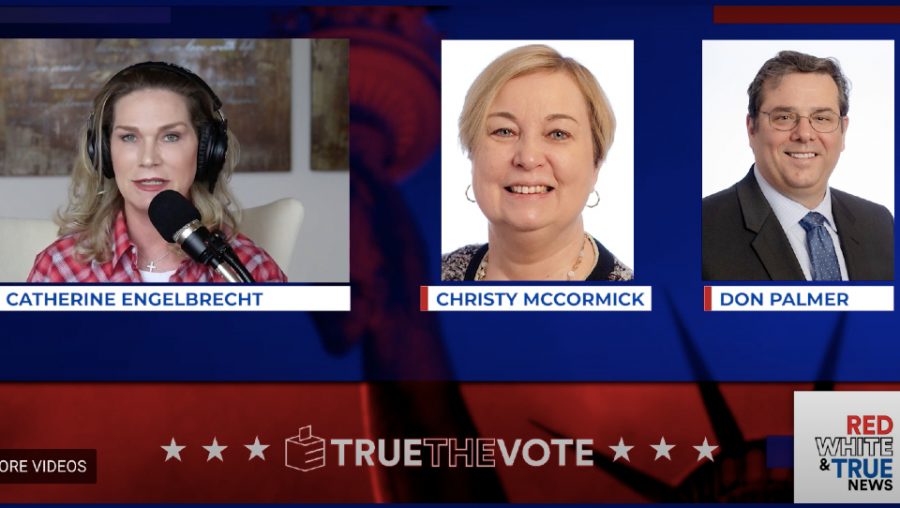 In late May, two Republican members of the U.S. Election Assistance Commission used a podcast produced by True the Vote, a right-wing voter suppression group, to cast doubt on the security of mail-in voting for the upcoming November 2020 elections.

The Election Assistance Commission (EAC) is an independent, bipartisan commission, established in 2002 by the Help America Vote Act (HAVA) that serves as “a national clearinghouse” of election administration information.

True the Vote has close GOP ties and is known for its campaigns to purge voter rolls, push voter ID laws, and intimidate voters. The group is now recruiting ex-military and law enforcement officers to patrol the polls in November under the guise of guarding against alleged voter fraud.

Christy McCormick and Don Palmer, the two Republicans on the four-member EAC, spoke on the podcast with True the Vote founder Catherine Engelbrecht about mail-in voting. Engelbrecht describes the process as “a disaster waiting to happen,” claiming that millions of registered voters who should be struck from the rolls will receive ballots.

Both commissioners agreed that achieving vote-by-mail for all 50 states would be nearly impossible for this year’s general election, and that the practice is ripe for fraud. According to The Washington Post, election experts agree that, “There is not any evidence of routine or even statistically significant fraud in the five states that do all-mail elections.”

But Palmer, a Donald Trump appointee to the commission, claimed that voting by mail leads to fraud.

“There have been studies that say that vote by mail and absentee is just simply more vulnerable to fraud because an election official is not confirming the identity of the voter,” claimed Palmer. “Greater minds than I have come to that conclusion, and it’s obvious, when you look at reports of fraud that take place occasionally. Election officials and election offices need to be vigilant to make sure that that increased probability of fraud doesn’t take place on a scale that swings an election.”

Palmer has been director of elections in both Virginia and Florida. According to ThinkProgress, Palmer used the remarkably flawed Crosscheck voter matching system to purge voters, many inaccurately, in Virginia in 2013. Crosscheck has disenfranchised thousands of voters, often Democrats and voters of color, and has been promoted by the extremist former Kansas secretary of state Kris Kobach. A year later, Palmer tightened the state’s voter ID law just two weeks before a special election.

“We need to make sure that voting registration rolls are up to date, which they are not,” said McCormick, who was nominated by Barack Obama in 2014 on the recommendation of GOP congressional leaders to fill a Republican seat on the commission. “They’re very dirty. A lot of them haven’t been cleaned, and so if we send out ballots just en masse we have no idea where those ballots are going.”

McCormick claimed that mail-in ballot systems, in which ballots are automatically sent to all registered voters, are riskier than absentee ballots, which voters request. “It’s not just the expense but the opportunity for fraud,” she said.

McCormick has stirred controversy in recent years by claiming that the idea of Russian digital interference in the 2016 election was “deceptive propaganda perpetrated on the American public” by the Obama administration. Since first saying this in early 2017, McCormick has repeated the claim and even targeted Republican state officials to emphasize that Russian interference should not be a concern.

McCormick also served on Trump’s disgraced commission on “election integrity,” which tried, and failed, to verify the president’s wild claims of voter fraud in the 2016 elections.

Navy Seals at the Polls?

At a strategy session in February, part of a conference sponsored by the secretive, far-right group Council for National Policy and attended by conservative donors and activists, Engelbrecht said that True the Vote is recruiting veterans, even Navy Seals, to patrol the polls in “inner city” and predominantly Native American communities. She calls the initiative “Continue to Serve.” The Intercept, in partnership with the watchdog group Documented, leaked recordings from the conference in an April 11 article.

“You wanna talk about people who understand and respect law and order and chain of command, you get some [Navy] Seals in those polls, and they’re going to say, ‘No, no, this is what it says. This is how we’re going to play this show,'” Engelbrecht said at the session.

A 1981 judicial consent decree banned veterans and ex-police from acting as poll watchers, but a judge failed to renew the ban in 2018. Morton Blackwell, treasurer of the Council for National Policy’s Executive Committee and a Republican National Committee member, said that because the ban was lifted, he planned to push the RNC to “devote significant resources” for “ballot integrity.” Author Anne Nelson confirmed Blackwell’s current CNP position.

True the Vote is working on a smartphone app to monitor voting precincts for alleged fraud in battleground states this year.

According to The Intercept, session participants contended that vote-by-mail initiatives threaten Republican candidates, revealing the true motive behind the Right’s opposition to the practice.

“Attendees did not identify any specific examples of voter fraud around vote-by-mail—rather, they expressed concern that the measure would benefit Democrats,” The Intercept reported.

The Money Behind True the Vote

The Greater Houston Community Foundation, a donor-advised fund sponsor, directed $139,000 of its clients donations to True the Vote from 2015-18. DonorsTrust, the “dark-money ATM” of the Right that billionaire families such as Coors, DeVos, and Koch use to funnel charitable contributions to right-wing nonprofits, contributed $50,000 in 2017, and mainstream donor-advised fund sponsors contributed smaller amounts: Fidelity Investments Charitable Gift Fund ($49,700 from FY2015-18), Vanguard Charitable ($38,000 from 2014-17), and Schwab Charitable Foundation ($20,200 from FY2015-17).

The Texas-based True the Vote is part of a coalition of conservative activist groups, fueled by right-wing megadonors, that are working to reduce voter turnout in the November general elections.

Among these groups is the Honest Elections Project, a project of Leonard Leo’s 85 Fund, which recently spent $250,000 on ads criticizing vote by mail and accusing Democrats of cheating in elections. The 85 Fund, formerly known as the Judicial Education Project, has been mostly funded by DonorsTrust.

As CMD reported, the American Legislative Exchange Council (ALEC) is beginning to take part in voter suppression activism after abandoning its Public Safety and Elections Task Force in 2012 after its support of controversial voter ID and stand your ground laws.

Last week, ALEC held an “exclusive call” with the Honest Election Project and a “former FEC official” for its members on mail-in voting.

In Ohio, an ALEC legislator introduced legislation to prevent the state from mailing absentee ballot applications with pre-paid postage to every registered voter in response to the health risks of in-person voting this fall. The original bill likely would have canceled in-person early voting for the three days leading up to Election Day in November. Lawmakers amended the bill to remove some of the suppressive measures, and it passed the House.

In Iowa, Republicans introduced a similar bill that would prevent the state’s Republican secretary of state from mailing absentee ballot applications to all registered voters, something he did for this year’s primary elections, which saw record turnout. The bill also prevents the secretary of state from taking emergency election action in response to the COVID-19 pandemic.

If bills like these do not produce the intended results in November, Republicans may be eyeing the courts if Trump doesn’t win re-election. In the True the Vote podcast episode, Engelbrecht said, “You can see it on the horizon. We know where this is headed…I think it’s headed to the Supreme Court. That is where we will see this presidential election decided.”