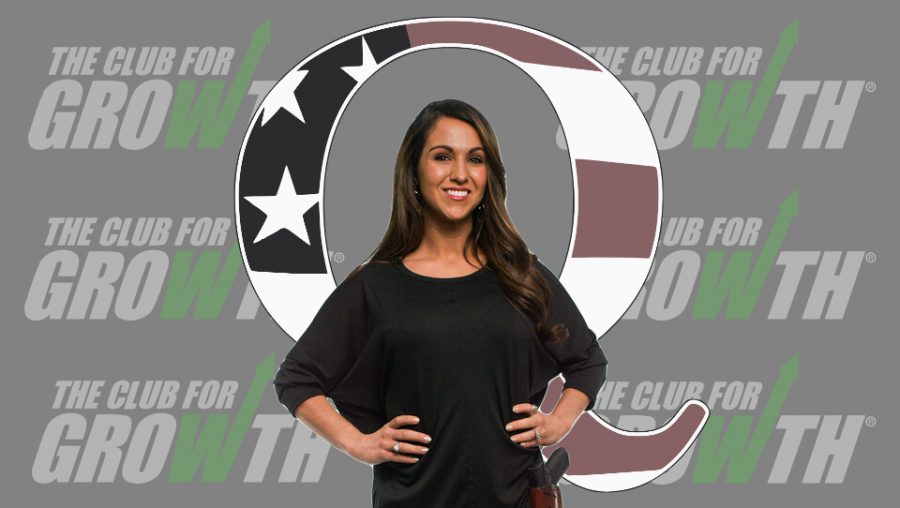 A well-known conservative political organization is spending big money to boost a Republican congressional nominee who praised QAnon, an extremist conspiracy movement that the FBI considers a domestic terrorism threat.

The central belief of the QAnon movement is that President Donald Trump is secretly working to expose and arrest members of the Democratic Party establishment, including Hillary Clinton and Barack Obama, for leading a satanic child sex trafficking ring. QAnon’s wild theories—which include the idea that John F. Kennedy, Jr., who died in 1999, has been in hiding for two decades—have allegedly inspired the murder of a baby and a mob boss, a murder by sword, and child kidnappings.

Club for Growth, a political organization founded by the right-wing operative and think tank figure Stephen Moore in 1999, is backing Lauren Boebert, a gun rights activist and restaurant owner who knocked off the Republican incumbent, Scott Tipton, in the primary for Colorado’s 3rd Congressional District.

The Cook Political Report considers CO-03 as a “lean Republican” district, meaning that Boebert has a good chance of making it to Congress next year. Facing off against Boebert is Democratic candidate Diane Mitsch Bush, a former sociology professor and past member of the Colorado state House. The Bush campaign released a poll in August showing the two tied, and the House Majority PAC, which supports Democrats, commissioned a poll in September that had Bush up by one point.

The two anti-Bush ads on CFGA’s YouTube channel do not mention Boebert and cast Bush as weak on crime and a “radical” on the environment.

While CFGA implies Boebert is the “law and order candidate,” the restaurant owner has had several run-ins with law enforcement and even ended up in jail in 2017. Boebert allegedly harassed a neighbor and engaged in disorderly conduct and careless driving. She missed multiple court dates.

The recent CFGA ad buys constitute the biggest non-campaign spending in favor of QAnon-friendly candidates to date by far.

Club for Growth PAC, which is a separate entity from CFGA, has spent $2,364 on mailers, emails, and a press release backing Boebert.

“Lauren Boebert’s interest in the disgusting, antisemitic views of QAnon should be disqualifying, and these views and candidates have no place in Congress,” Caleb Cade, Bush’s communications director, told CMD. “She continues to lie about Diane’s policy positions because she’s desperate.”

CFGA did not respond to CMD’s request for comment.

‘It Can Be Really Great for Our Country’

In May, Boebert appeared on prominent QAnon personality Ann Vandersteel’s online show, Steel Truth, and said she is “very familiar” with QAnon. Boebert claimed QAnon is “more my mom’s thing,” but said she hopes it “is real because it only means America is getting stronger and better, and people are returning to conservative values. And that’s what I’m for…It can be really great for our country.”

We can now add Lauren Boebert to the ever-growing list of QAnon supporters who are running for Congress. https://t.co/VJbFGkYKLx pic.twitter.com/m1bklAfikp

Boebert appeared on another major QAnon-focused show, Patriots’ Soapbox, and appears to have a YouTube account that subscribes to multiple QAnon channels, according to Media Matters.

The GOP nominee does not adhere to some of QAnon’s most extreme conspiracy theories, but she “has embraced the idea that there is a deep-state anti-Trump network,” a central QAnon belief, according to The Colorado Sun. Fox Denver wrote that Boebert “supports a few of QAnon’s theories.”

Boebert’s spokesperson has told the media that the candidate “has been on the record numerous times saying that she does not support QAnon or other conspiracy theories.” But most recently, Boebert flirted with another unfounded QAnon conspiracy theory that actor Tom Hanks, who recently fundraised for Joe Biden’s campaign, got Greek citizenship because the nation classified pedophilia as a disability.

In June, Boebert defied Colorado public health orders by keeping her restaurant, Shooters Grill, open during the coronavirus pandemic. The restaurant’s license was revoked for roughly one week.

“Instead of bringing people together in the middle of a public health and economic crisis, Boebert has embraced dangerous conspiracy theories deemed a domestic terror threat by the FBI and spoken out against vaccination—even amid this pandemic,” Brooke Goren, a spokesperson for the Democratic Congressional Campaign Committee, which supports Bush, told CMD. “Meanwhile, she thinks the law doesn’t apply to her, resisting arrest from police officers and claiming her friends at Fox News will intervene to save her from her crimes and putting customers’ health at risk at her restaurant.”

The DCCC has spent $344,000 on independent expenditures against Boebert, according to a tally by the Center for Responsive Politics.

Club for Growth PAC President David McIntosh said in the PAC’s July endorsement that Boebert “understands the irreparable harm government overreach and stifling regulations can cause. Boebert already shocked the Establishment in winning the primary against an incumbent, and I have no doubt that she will be a conservative firebrand in Washington who will fight for freedom and pro-growth policies.”

President Donald Trump, a veteran conspiracy theorist, issued his “Complete and Total Support” for Boebert on Sep. 10. Before that, Trump invited her to the White House to watch his August Republican National Convention speech. Trump also tweeted his support for Marjorie Taylor Greene, a QAnon adherent who won the GOP primary in Georgia’s 14th Congressional District.

In August, the president claimed he didn’t know much about QAnon but that its adherents “like me very much, which I appreciate” and they “love our country.”

The House Freedom Caucus’ PAC has reported spending over $70,000 on independent expenditures backing Boebert. The expenditures include emails, phone calls, and paying the processing fees of the campaign donations it has solicited on her behalf. The PAC, the House Freedom Fund, also collects donations for its endorsees—including Boebert, Greene, and Burgess Owens, a Utah candidate who has appeared on multiple QAnon-friendly shows—and pays the processing fees.

CMD reported on Oct. 1 that the House Freedom Caucus has helped boost Greene and Boebert by raising money for them and spending tens of thousands of dollars on independent expenditures backing them. These amounts are dwarfed by CFGA’s recent pro-Boebert spending.

Other outside spending groups active in the CO-03 race include Protect Freedom PAC, a super PAC mostly funded by investor Jeff Yass that has spent $78,000 backing Boebert, and Emily’s List’s super PAC, Women Vote!, which has spent $245,000 opposing Boebert.

Club for Growth is part of a wide network of right-wing political groups and has several well-connected figures on its board.

As of mid-2018, the latest information available, Club for Growth’s board included:

The biggest CFGA donor in the 2020 cycle is shipping supply magnate Richard Uihlein, who has given the PAC $26.5 million. Yass, who co-founded the trading company Susquehanna International Group, has contributed $17.5 million.

Richard Gaby has given nearly $1.6 million to CFGA in the current election cycle. Gaby’s wife, Barb Van Andel-Gaby, is chair of the Heritage Foundation’s Board of Trustees and is a director at Alticor, the conglomerate founded by her father, Jay Van Andel, and Richard DeVos. The couple are both trustees of the Richard and Barbara Gaby Foundation, which funds a number of conservative causes including Heritage. The foundation gave $100,000 from 2017 to 2018, to anti-LGBTQ hate group Alliance Defending Freedom.

CFGA is one of the highest-spending super PACs of the 2020 elections, having made nearly $44 million in independent elections expenditures as of Oct. 6, including $9.3 million against Biden and $2.4 million against Democratic Texas House candidate Wendy Davis.

CMD recently revealed several Republican Party megadonors who have donated to the Boebert or Greene campaigns. Prominent donors who have given to Boebert include Texas anesthesiologist, hospital administrator, and GOP activist Lawrence Gelman, Prescott Investors managing partner Thomas Smith, and coal heir Tatnall Hillman, who is the top contributor to a super PAC that has spent $46,000 on independent expenditures backing Greene.