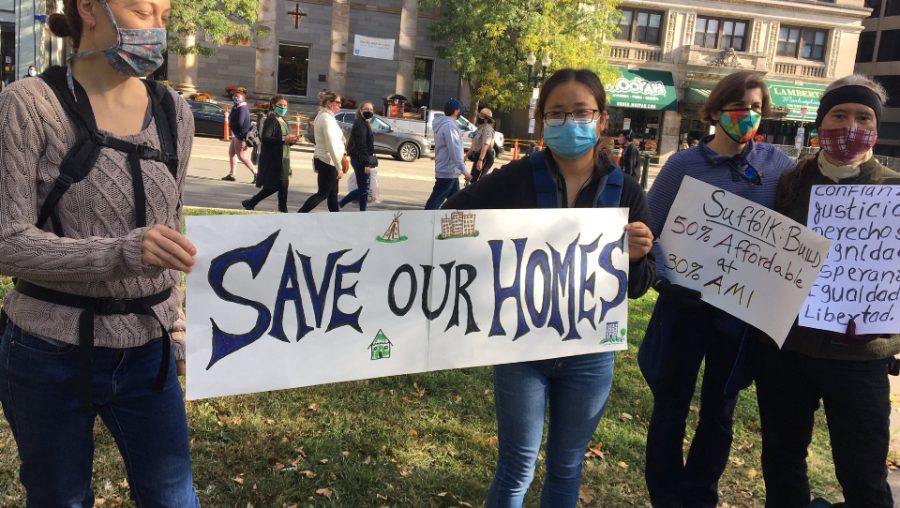 As many as 40 million Americans face possible eviction in January, thanks to the coronavirus’ toll on the economy and insufficient federal stimulus dollars for struggling renters.

In early September, the Centers for Disease Control (CDC) issued a moratorium on evictions through the end of 2020, citing a potential increase in the spread of the coronavirus if people lose their places of residence. But five weeks later, after multiple court cases and aggressive lobbying by the real estate industry, the moratorium has lost its teeth.

On Oct. 9, the CDC issued a new document of frequently asked questions about its moratorium that allows landlords to begin eviction proceedings now as long as the actual eviction takes place after Dec. 31. It also states that land­lords are not required to inform ten­ants of the moratorium.

A major force behind this change is a legal nonprofit that is heavily funded by the foundation of billionaire industrialist and Republican megadonor Charles Koch.

The New Civil Liberties Alliance (NCLA)—a group with a mission to fight the “unconstitutional administrative state”—went to court on Sep. 8 representing Virginia landlord Rick Brown, arguing that the CDC did not have the legal authority to prevent Brown from evicting clients who can’t pay rent and replacing them with those who can afford market-rate rents. The National Apartment Association, a major lobbying group for landlords, joined the suit as a plaintiff two weeks later.

Koch is NCLA’s biggest known donor, having given $2 million to the group via the Charles Koch Foundation from 2017, the year when the group was founded, to 2018. Tax records for 2019 are not yet available to the public.

The CDC’s eviction moratorium update “is symptomatic of a system that has always and continues to work to benefit the profiteers,” Tara Raghuveer, a tenants’ rights activist who leads KC Tenants and the People’s Action Institute’s Homes Guarantee campaign, told CMD. “It’s naked self-interest…. Every single eviction that we allow right now, we are putting someone’s profits over another person’s life, and it’s disgusting.”

“It’s because of corporate America, the stranglehold that they have over our democracy and our economy that coronavirus is the deep and pernicious threat that it remains in America,” continued Raghuveer. “We are consistently prioritizing private industry over public health and science and people’s lives, and it shows.”

In addition to advocating for evictions during the pandemic and resulting economic crisis this year, NCLA filed a lawsuit against Massachusetts Gov. Charlie Baker over his COVID-related public safety orders. And as Koch-funded groups prepared to wage legal battles over COVID-19 restrictions, other groups he finances helped organize protests of state lockdown orders and fought to block bailouts of desperately cash-strapped states and localities, as CMD has reported.

About one-third of U.S. adults say they’re somewhat or very likely to face the threat of eviction or foreclosure in the next two months. The National Council of State Housing Agencies estimated late last month that potentially 34 million Americans will owe as much as $34 billion when the CDC moratorium expires at the end of this year.

“Even under this moratorium period…nothing is stopping the debt from piling up,” said Raghuveer. “People are being buried under this mountain of debt, and there is no proposed solution to that right now…. Come January, people are going to be facing real financial ruin. This is the type of financial ruin that people don’t recover from, and their kids don’t recover from. They’ll lose everything.”

On top of crushing debt, millions of new homeless people on the streets during the pandemic will drastically worsen the public health emergency that exists today.

Can our systems cope with potentially tens of millions of evictions early next year?

Even if the Trump administration extends the eviction moratorium into 2021, a major crisis looms.

“The tenant movement has been arguing since March that the only way we get out of this with any semblance of dignity and stability for the poor and working class people in this country who are suffering now…is by canceling rent and mortgages and canceling rental debt that’s accrued,” Raghuveer said.

Koch’s investments in NCLA appear to have already paid off.

NCLA is an associate member of the Koch-funded State Policy Network (SPN), a web of right-wing, free-market think tanks and other nonprofits that also receive funding from Koch foundations. In its short existence, NCLA has litigated on behalf of, filed amicus briefs in support of, and publicly supported many similarly Koch-funded organizations.

In another campaign finance case, Campaign Legal Center v. Federal Election Commission, NCLA filed an amicus brief asking the FEC to dismiss the case. The Campaign Legal Center, a government watchdog group, sued the FEC for failure to act on a four-year-old complaint it had filed over former presidential candidate Jeb Bush’s establishment of a super PAC that spent tens of millions of dollars backing his 2016 campaign.

In January 2019, NCLA came out in support of the Cato Institute and the Institute for Justice, both SPN members and funded by the Charles Koch Foundation, regarding the groups’ legal action against the Securities and Exchange Commission’s “gag rule.”

Koch is one of organized labor’s biggest foes, and he funds anti-labor policy organizations such as SPN and its sister group, the American Legislative Exchange Council (ALEC). NCLA is part of this fight. It is representing right-wing media company FDRLST Media, LLC, which runs The Federalist, in a labor case that arose when publisher Ben Domenech threatened to “send back to the salt mine” the first staffer who tries to unionize.

In another case, NCLA filed an amicus brief supporting tech giant Oracle in its case against the Department of Labor that challenges the agency’s internal process for adjudicating race and gender discrimination claims, a process that stemmed from Lyndon Johnson’s 1965 nondiscrimination executive order.

NCLA’s legal work often references the 1984 decision in Chevron U.S.A. Inc. v. Natural Resources Defense Council, which established the important legal precedent called “Chevron deference,” which holds that courts should defer to agencies’ interpretations of laws passed by Congress that are ambiguous. This deference empowers agencies to fulfill their missions with effective regulation.

Koch and his network have opposed Chevron deference since its origin. As Christopher Leonard, author of Kochland, explains in his Oct. 12 op-ed about Supreme Court nominee Amy Coney Barrett, Koch is spending money to get her confirmed, betting that she’ll join other conservatives in striking down Chevron deference. For Koch, whose business deals heavily in fossil fuels, hobbling the Environmental Protection Agency’s ability to regulate greenhouse gases would be enormously profitable.

NCLA attacked Chevron in its challenge to the Bureau of Alcohol, Tobacco, Firearms and Explosives’ 2019 ban on bump stocks—attachments that effectively turn semi-automatic rifles into fully automatic ones and that terrorists have used to kill more people more quickly.

A number of staff members of NCLA, including multiple top executives, have close ties to Koch’s business and his political network. The setup is common in Kochworld; alumni of various Koch-funded think tanks, political groups, and academic programs often shuffle between the numerous entities in the businessman’s vast influence operation. These organizations have not only a shared funder but a shared mission: to slash taxes and eviscerate government regulation. These chief goals of the Koch network seek to increase profits and legal headaches for Koch and his industrial conglomerate, Koch Industries.

NCLA’s Executive Director and General Counsel Mark Chenoweth was general counsel for Koch Industries at its Kansas headquarters, and he most recently spent four years as general counsel of the Koch-funded Washington Legal Foundation, an SPN member.

Multiple other staffers have worked at the Washington Legal Foundation, including NCLA’s director of development, Lauren McDonald, who also completed the Koch Associate Program, a program sponsored by the Charles Koch Institute that places staff at its approved nonprofits and trains them in Koch’s trademarked “Market-Based Management” business methodology.

Communications and Marketing Director Judy Pino has worked for the Libre Initiative, a Koch-backed political group that was recently folded into Koch’s Americans for Prosperity.

Senior Counsel John Vecchione was previously CEO of the Cause of Action Institute, which has received grants from the Charles Koch Institute.

Other employees have completed Koch internship programs, worked at Koch-funded think tanks such as the Cato Institute, and graduated from Koch-backed academic programs, such as the Antonin Scalia Law School at George Mason University.

NCLA’s board includes Marty Zupan, a Koch network insider who was president and CEO of the heavily Koch-funded academic program the Institute for Humane Studies, an SPN member.

While Koch is easily the biggest known donor to NCLA, several of his allies have also funded the group. According to CMD’s research of publicly available tax records, four right-wing foundations that often fund the same causes as Koch have give six-figure amounts since 2017: the Thomas W. Smith Foundation ($666,666), the Lynde and Harry Bradley Foundation ($600,000), the Searle Freedom Trust ($300,000), and the Sarah Scaife Foundation ($300,000).