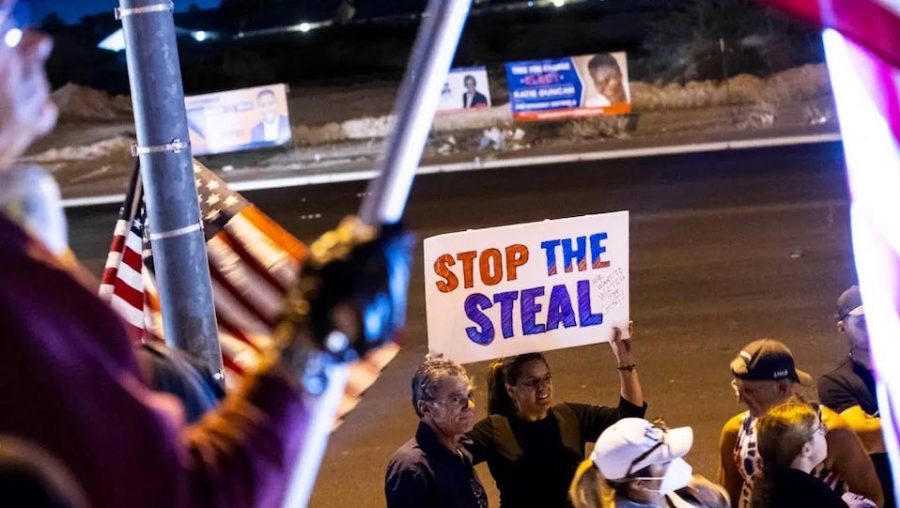 As ballot counting to determine the outcome of the 2020 U.S. Presidential election continues in swing states, right-wing operatives with ties to the influential Christian Right group Council for National Policy (CNP) are organizing daily #StoptheSteal protests. #StoptheSteal, a “coalition/team effort” that The Washington Post reported yesterday was shut down on Facebook, and FreedomWorks are promoting and hosting rallies across the country based on the false claim that Joe Biden’s growing lead is based on election fraud.

Facebook spokesman Andy Stone announced in a statement that its banning of the #StoptheSteal group page with 360,000 members was due to it being “organized around the delegitimization of the election process, and we saw worrying calls for violence from some members of the group.”

The new #StoptheSteal site was registered on November 4 by viceandvictory.com in Fort Worth, Texas. Vice and Victory is nothing but a landing page for Twitter, Instagram, and Facebook accounts. An examination of the three, leads to one individual: Ali Akbar AKA Ali Alexander.

Akbar, who has a book written on him titled “Vice and Victory,” has taken on the name Ali Alexander to distance himself from his past legal troubles. In 2007, he pled guilty to felony property theft in Fort Worth, and in 2008 he pled guilty to a felony charge of credit card abuse, reported the daily dot.

Alexander’s homepage, which links to his blog for subscribers and offers a “Persuasion Masterclass” for $199, links to StoptheSteal.us, as does his Twitter profile.

Alexander calls himself an “interpreter of energy for this period,” and is Pro-Trump influencer on Twitter with over 140,000 followers. It is unclear who funds Alexander’s activities, but Politico noted in 2018 that Robert Mercer, one of the “blow-it-all-up billionaires” behind the rise of Trump, gave a PAC Alexander advises $60,000.

Alexander, a former member of CNP, announced the StoptheSteal.us site with a video and a tweet, “Proud to be working with these patriots to Save the Election,” and listed 15 Twitter handles.

Many of the individuals listed are organizers of individual states protests. Jack Posobiec, a correspondent for the far-Right One America News Network, and pro-Trump activist Scott Presler are leading a protest at the capitol in Harrisburg, Pennsylvania.

Right-wing social media influencer Brandon Straka and Amy Kremer led a Detroit, Michigan protest this morning at the TCF Center, where ballots were being counted. Protesters blocked a bridge, and at least one arrest was reported.

Protests at the capitol in Madison, Wisconsin yesterday, today, and tomorrow are being led by Alex Bruesewitz, co-founder and CEO of the PR firm X Strategies.

Although not listed in Alexander’s tweet, Turning Point USA‘s founder and president Charlie Kirk is listed as leading an Arizona protest at the Maricopa Tabulation Center in Phoenix at 6 p.m. this evening. Kirk is also a CNP member.

Ed Martin, president of the Phyllis Schlafly Eagles, listed by Alexander as a partner in the tweet above, is also a member of the CNP.

FreedomWorks, led by president Adam Brandon, who also serves on the advisory council for Turning Point USA and the CNP Action Board of Directors, is also organizing “Protect the Vote” protests in Pennsylvania, Michigan, Wisconsin, Arizona, and Oklahoma today. The times of the events do not match the #StoptheSteal events.

FreedomWorks, a group that grew out of a Charles Koch-founded organization and that helped launch the Tea Party in 2009, was also behind many of the protests to reopen the economy amidst the pandemic this year, as the Center for Media and Democracy (CMD) reported.

Bradley Foundation president and CEO Richard Graber is a CNP member. Bradley has given FreedomWorks $1.2 million (2007-2017) and disclosed another $100,000 this year to fund FreedomWorks “Save Our Country initiative,” as CMD first reported.

Heather Higgins is a CNP Gold Circle member, and her Randolph Foundation gave FreedomWorks $10,000 in 2017.

Tea Party Patriots Action (TPPA) announced this morning that it is “working with FreedomWorks, Turning Points, Heritage, and countless social media influencers” to promote and hold “Protect the Vote” rallies in Georgia, Arizona, Michigan, and Pennsylvania. TPPA’s honorary chairman Jenny Beth Martin serves on the CNP Executive Committee and a number of those working at the Heritage Foundation are also members.

CNP is deeply tied to the Trump administration. In August, Trump himself spoke to CNP on the last day of the meeting, where he repeatedly thanked the Christian Right group for its leadership.

Trump’s vice president Mike Pence went further in thanking CNP in November 2019, for “standing by him” and for giving him counsel “every single day.” Pence later followed up in March of this year in a letter made public by investigative researcher Brent Allpress, in which he “thanked the Council for National Policy for your support and for consistently amplifying the agenda of President Trump and our Administration.”

Brent Allpress contributed research on #StoptheSteal and Vice and Victory for this report.