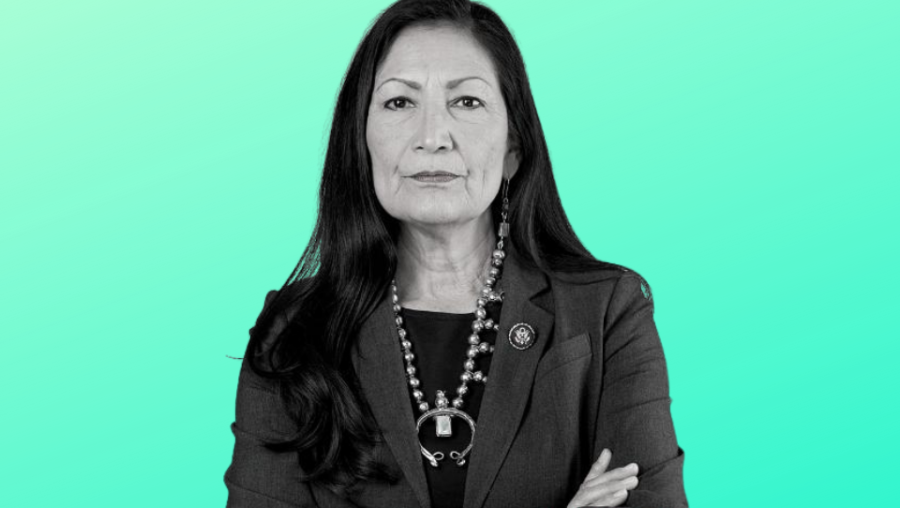 Adapted from image from Deb Haaland/Twitter

This article was produced in partnership with The Guardian.

Republicans appear eager to derail the cabinet nomination of Deb Haaland, a Native American congresswoman who wants to conserve federal lands and slow climate change as secretary of the interior to Joe Biden.

In two days of confirmation hearings before the Senate Energy and Natural Resources Committee, Haaland faced hostile questions from a group of GOP senators who attempted to cast her as an extremist and a danger to American jobs.

Haaland, a 35th-generation New Mexican who would be the first Native American cabinet secretary, supports the Green New Deal and opposes fracking on federal land. As secretary of the interior, she would implement Biden’s climate agenda, which, though relatively ambitious, may not go as far as she would prefer.

Hostile questioning at her confirmation hearings was led by senators who have taken huge amounts of campaign cash from the oil and gas industry. Some are personally invested in fossil fuels.

John Barrasso of Wyoming, the ranking Republican on the committee, said he was “troubled by many of Representative Haaland’s views,” which he characterized as “radical.”

“We shouldn’t undermine our energy production and we shouldn’t hurt our own economy,” he said in an opening statement. “Representative Haaland’s positions are squarely at odds with the mission of the Department of [the] Interior.”

Haaland had to correct Barrasso after he mischaracterized Biden’s temporary pause on new federal oil, gas, and coal leases, calling it a ban.

Barrasso, who has questioned whether humans contribute to the climate crisis, also complained about a tweet in which Haaland said Republicans don’t believe in science. What he didn’t say was that the oil and gas industry has bankrolled his political career, and he is personally invested in a company that transports a sizable portion of U.S. natural gas.

From 2015 to 2020, Barrasso’s campaign and leadership political action committee (PAC) took in more than $480,000 from the PACs of oil and gas companies, more than from any other industry, according to data analyzed by OpenSecrets.org.

In 2018, his most recent election year, his campaign got the maximum amount of $10,000 from the PACs of companies such as natural gas driller Chesapeake Energy, which extracts oil from wells in the Powder River Basin in Wyoming; oil giant Chevron, which owns oil and gas properties in Haaland’s state, New Mexico; and fossil fuel conglomerate Koch Industries.

In his full federal career, Barrasso has received nearly $1.2 million from oil and gas firms and their employees, making him one of the Senate’s top recipients of such money.

Barrasso’s ties to the industry do not stop at campaign contributions. The senator’s most recent personal financial disclosure shows that he owns between $250,000 and $500,000 of stock in Berkshire Hathaway, whose subsidiaries’ 16,300 miles of pipeline transported 8 percent of the natural gas Americans consumed in 2019. Chief executive Warren Buffett made headlines for betting “big on gas” last year, during the pandemic, even as consumption took a hit.

North Dakota Sen. John Hoeven criticized Haaland for having joined fellow Native Americans to protest the Dakota Access Pipeline, which risks leaking dirty oil into the water supply and sacred lands of the Standing Rock Sioux tribe in his state. Hoeven said he was concerned for his state’s economy but failed to disclose his own substantial investments in the oil and gas industry, including in North Dakota.

The senator owns dozens of oil well interests. And at the end of 2019, he owned between $50,000 and $100,000 of stock in Chevron, Marathon Petroleum and Schlumberger, an oilfield services and equipment company, and between $100,000 and $250,000 in ExxonMobil. In January 2021, after a suspicious stock purchase, he put some assets in a blind trust.

“These conflicts of interest may directly and substantially impact the senators’ personal wealth and thus influence their decision on whether to confirm the appointment of Haaland,” he said. “This type of personal conflict of interest is not permitted among executive branch employees…not so for members of Congress.”

Before the hearing, Sen. Steve Daines of Montana said he was “deeply concerned” by Haaland and threatened to block her nomination, citing her support for the Green New Deal and a pause on new oil and gas leases on federal land, as well as her opposition to Keystone XL. Daines also griped about Haaland’s sponsorship of legislation to protect grizzly bears. After the hearing, he tweeted critically about her.

Daines failed to mention that his political career has received a major boost from the oil and gas industry. From 2015 to 2020, his campaign and leadership PAC took in $288,500 from oil and gas company PACs, second only to insurance PACs. In his federal career, he’s received more than $1.2 million from oil and gas PACs and employees.

Sen. Lisa Murkowski of Alaska is an oil and gas proponent, but she has a strong relationship with Alaska Natives and may not risk that good will by voting against Haaland. But several other Republicans have questioned Haaland’s fitness to lead and are major recipients of oil and gas PAC money. Some own considerable fossil fuel investments.

The offices of Barrasso, Cassidy, Daines, Hoeven, and Marshall did not return requests for comment about whether campaign contributions and personal investments influenced their votes, including on Haaland’s nomination.

All Democrats are likely to vote to confirm Haaland. Sen. Joe Manchin of West Virginia, the most conservative Democrat in the Senate, was undecided until Wednesday afternoon, when he announced his support. Manchin is a longtime fossil fuel booster and owns millions of dollars of shares in his family coal business, Enersystems, which netted him $613,000 in 2019. His campaigns have received hundreds of thousands of dollars from oil, gas and coal company PACs.

Manchin’s support for fossil fuels is so significant that he was reportedly among Donald Trump’s top picks for Energy secretary. He is already becoming a thorn in Biden’s side, seeking to scale back the Covid-19 relief package and pledging to vote against the nominee for the Office of Management and Budget, Neera Tanden.