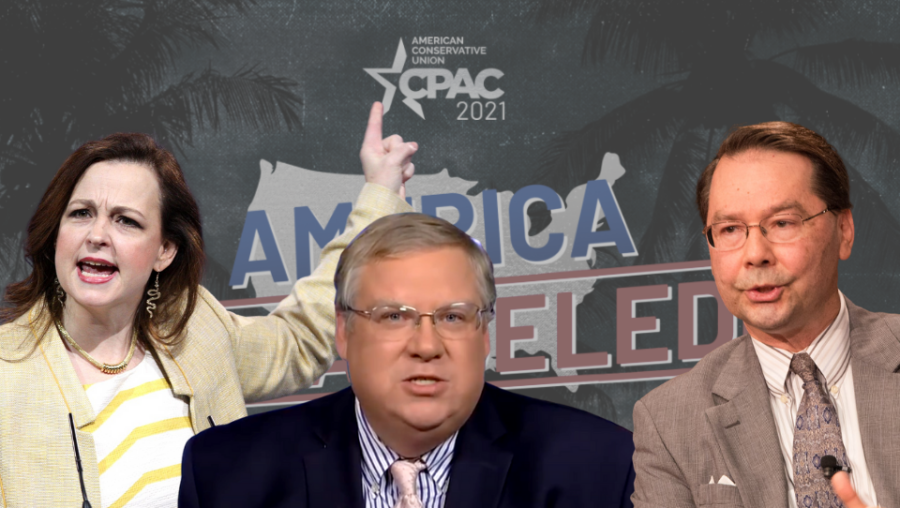 At the annual Conservative Political Action Conference last weekend, the right wing of the Republican Party celebrated Donald Trump and featured an agenda that’s light on policy and heavy on voter fraud lies and cultural grievances.

Due to Covid-19 health restrictions, right-wing operatives and politicians descended on Orlando this year instead of the usual Washington, D.C. for an in-person conference. The events were hosted by the American Conservative Union (ACU) and sponsored by Trump allies, Koch network think tanks such as the Heritage Foundation and Leadership Institute, advocacy organizations like Turning Point USA and Judicial Watch, and right-wing media groups including Project Veritas, the Epoch Times, and Fox Nation. Conspicuously missing from this year’s sponsors was the National Rifle Association, which is bankrupt and under investigation for potential self-dealing.

The theme of the conference was “America Uncanceled,” a focus on the Right’s opposition to “cancel culture.” CPAC organizers, however, contradicted themselves by removing a speaker from the program after Media Matters reported on his history of blatant antisemitism.

While conservative cultural grievance was the theme, the CPAC 2021 program was also heavily focused on the “Big Lie” of widespread voter fraud, a fact-free electoral strategy that Republican politicians and their allies have increasingly employed in recent years. Numerous Trump administration alumni, Trump loyalists in Congress, and voter suppression figures from the think tank and advocacy world took the stage for election-related panel discussions.

CPAC’s program prominently featured members of the Council for National Policy (CNP), a powerful network of far-right operatives who influence GOP policy largely behind the scenes, and members of a secretive voter suppression working group coordinated by the American Legislative Exchange Council (ALEC).

Fears of voter fraud—stoked by Trump, other GOP officials, and right-wing think tanks and media—inspired the deadly Capitol insurrection on Jan. 6. Nonetheless, CPAC doubled down on the lies, with seven “protecting elections” panels and other sessions such as “Did Your Vote Count?”

The conference began with an extended video that was a patchwork of lies about voter fraud. Interspersed with scenes of Trump supporters outside vote-counting facilities are clips of media figures such as Fox News’ Tucker Carlson and ACU Chair Matt Schlapp, whose wife, Mercedes, served in the Trump administration.

In November, Kelly asked a Pennsylvania court to throw out all 2.3 million mail-in votes or scrap all votes entirely and appoint delegates to choose the winner of the presidential contest, claiming that the state’s 2019 mail-in ballot expansion was unconstitutional. He eventually appealed to the Supreme Court, which threw out his case. Kelly also wants to end mail-in ballots completely for the 2021 municipal primaries in May.

Martin criticized Georgia’s expanded absentee balloting rules, failing to acknowledge the role that the deadly pandemic played in efforts to facilitate safe, contact-free voting. She claimed, “I’m here to tell you, Georgia had very real problems, and we should have had our evidence heard in a court of law. We never did. And had it been heard, I think the election would have been overturned.”

Milius joked about people saying that promoting voter fraud allegations would lead to an insurrection. She went on to make the wild claim that there were 42,000 “duplicate voters,” or those who illegally voted twice in the same election, in Nevada. “This is not just magical stuff that we’re just looking up,” she said.

The Trump campaign used that 42,000 number, which came from a shoddy report, in a lawsuit filed with a Nevada district court. The judge rejected the case, saying the evidence had “little to no value,” and the state Supreme Court also threw it out, stating that the campaign failed to demonstrate anything that would merit reversing the election results.

At the time, Schlapp made dramatic claims of unprecedented “illegal voting” and “corruption.”

CPAC also brought in several leaders of ALEC’s secretive working group on election issues and redistricting as speakers. Formed in 2019, the group convened in December 2020, after Trump lost the election, as many of ALEC’s members were spreading evidence-free claims of voter fraud.

One “protecting elections” panel called “They Told Ya So: The Signs Were Always There” featured working group members J. Christian Adams and Heritage Foundation senior fellow Hans von Spakovsky, along with National Review columnist John Fund and ACU’s Schneider as moderator. Schneider began the panel by asking the guests, “When did the Left, in earnest, really begin this assault on our election system?”

Fund, who wrote a book on voter fraud with Spakovsky, called H.R. 1 “the worst bill that’s of a non-fiscal nature that has ever been introduced in Congress.” He said voting laws passed by Democrats are “loosey goosey” and result in “planned chaos.”

Adams’ organization, PILF, sued the Pennsylvania secretary of state two weeks before the general election, claiming that 21,000 dead people had voted in the state. Right-wing outlets such as Breitbart News and Trump loyalists Rep. Matt Gaetz (R-FL), who spoke at CPAC, and Rudy Giuliani, Trump’s lawyer, spread the dubious claim. A federal judge denied PILF’s request to remove those voters from the rolls, questioned the group’s methodology and timing and saying that Pennsylvania’s existing system for removing deceased people from the rolls is effective.

“Every once in a while, it turns out that someone votes in the name of someone who’s passed away,” said Justin Levitt, a law professor at Loyola Law School and a voter fraud expert. “A handful of votes in a sea of millions. It’s not OK, but it doesn’t swing results…Far more frequently, the claims [of dead voters] collapse. Over and over and over and over.”

Claims of dead voters in Michigan were also debunked.

The panelists warned CPAC attendees about “grifters” in voter fraud detection and encouraged them to follow the work of their organizations.

ALEC working group and CNP member Cleta Mitchell, one of the most prolific voter suppression lawyers in the country, was scheduled to speak on the “Failed States” panel but did not appear. Mitchell had to resign from her law firm after The Washington Post published audio from a post-election call she was on with Trump and Georgia’s secretary of state. Trump urged the secretary to “find 11,780 votes” in an attempt to steal the state from Biden. Mitchell was a “key figure” in the phone call and an early backer of Trump’s false voter fraud claims.

In September, Mitchell contacted Trump and his chief of staff, Mark Meadows, to tell them of “a massive effort to steal the election” by Democrats. Meadows called her the day after the election and asked her to go to Georgia.

Mitchell laid low for a few weeks after her resignation but has resurfaced and continues to lie about voter fraud, as Documented reported.

In a February podcast, weeks after the insurrection, Mitchell falsely stated, “There are more illegal votes included in the certified results of the 2020 Presidential Election in Georgia than the margin of victory between President Trump and Joe Biden.”

Trump’s lawyers lost over 60 court cases that alleged voter fraud with no evidence, including several in Georgia, and he’s under criminal investigation for trying to interfere with the election results. But CPAC tweeted that Mitchell would share “true facts” about what really happened in the state.

.@CletaMitchell is a national election law expert who will share her on-the-ground experiences in #Georgia and the true facts about what happened on Nov 3rd and since then at #CPAC2021 in #Orlando. pic.twitter.com/xrL1DqHuFp

Former Nevada attorney general Adam Laxalt, who was co-chair of the Trump campaign in his state, was scheduled to speak on another panel that denied the valid results of the election called “Other Culprits: Why Judges & Media Refused to Look at the Evidence.” He did not take part in that panel, however.

Of the 40 current U.S. senators and representatives who spoke at CPAC, 33 voted to overturn the presidential election results. Sens. Ted Cruz (R-TX) and Josh Hawley (R-MO), the two ringleaders of the group of senators who voted against the results, each had solo speaking slots. Extremists such as Rep. Andy Biggs (R-AZ) and Paul Gosar (R-AZ), who both allegedly helped “stop the steal” organizer Ali Alexander plan the Jan. 6 rally that preceded the insurrection, and Rep. Lauren Boebert (R-CO) were also on the speaking schedule.

Concluding the events was Trump himself, who repeated numerous false claims about voter fraud during his lengthy speech.

“This election was rigged,” Trump lied. “And the Supreme Court and other courts didn’t want to do anything about it.”