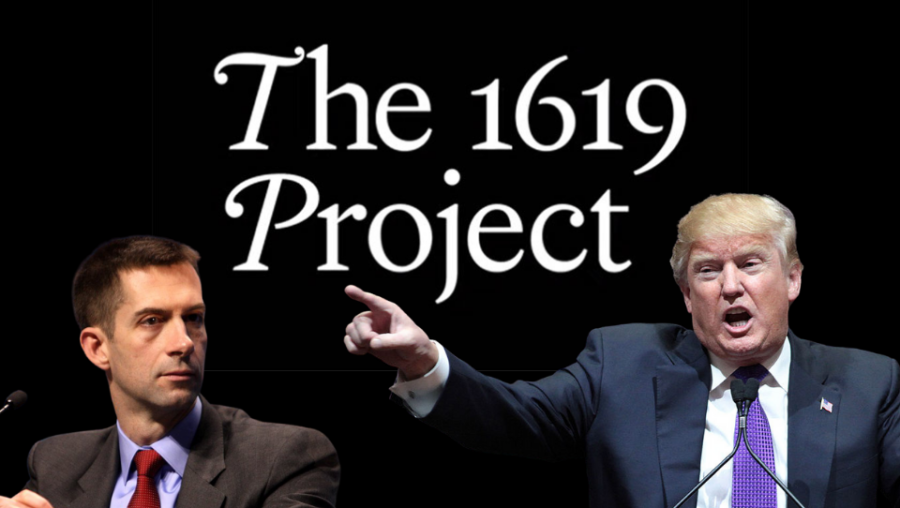 Adapted from photos by Gage Skidmore.

Donald Trump’s presidency was defined by racism. His rhetoric and policies consistently denigrated and harmed people of color. And as he ran for a second term in 2020, his White House and campaign strategy merged into one, a broad campaign to scare white suburbanites into voting for the supposed “law and order” candidate.

While the Trump administration arrested racial justice and antifascist protesters and spread racist propaganda, it sought to further exploit racial divisions by targeting education on history and race. Now Republican lawmakers in several states are trying to ban a curriculum that teaches students about America’s racist past.

Trump attacked the 1619 Project, an initiative published by The New York Times Magazine that looks at U.S. history in the context of slavery, racism, and the contributions of Black Americans, calling it “toxic propaganda.” The ex-president attempted to link education about slavery and race to what he called “left-wing mobs,” a description he and other conservatives used to describe Black Lives Matter demonstrators. Trump and his allies tried to flip the script on a nation still dominated by white people and with huge racial disparities, claiming it was those seeking equality for all who were bullies out to silence patriotic Americans and “traditional values.”

The 1619 Project’s creator, Nikole Hannah-Jones, won a Pulitzer Prize for her work, and it has evolved into a free curriculum.

Republican Arkansas Sen. Tom Cotton introduced a bill called the “Saving American History Act” in July to ban the use of federal funds to teach the 1619 Project in K-12 schools, calling the project “left-wing garbage.”

In response to the project, Trump created a “1776 Commission” that, in the final days of his administration, released a racist school curriculum that historians called “a hack job” and “full of lies.” The commission’s chair was Larry Arnn, president of the private conservative Christian Hillsdale College, which gets funding from the family of Trump’s education secretary, Betsy DeVos. A number of Hillsdale alumni worked in the Trump administration. Members of the commission included Turning Point USA founder Charlie Kirk and Bob McEwan, president of the far-right political influence operation the Council for National Policy.

Along the same lines, Trump issued an executive order banning the federal government and its contractors, subcontractors, and grantees from offering diversity training, calling it “divisive” and a “malign ideology.”

As Trump and many other Republican candidates ran against Black Lives Matter and racial justice initiatives, their allies at right-wing think tanks and policy groups backed them up.

In 2020, while it stood up for monuments to slavery and attacked Black Lives Matter, the American Legislative Exchange Council (ALEC) also tried to tear down the 1619 Project. At its end-of-year meeting, ALEC hosted a workshop decrying 1619 and diversity training. “The 1619 curriculum is infecting our schools,” reads the workshop’s description. “Diversity training is taking over our workplaces. How do patriotic Americans respond?”

Workshop panelists included several staffers from the right-wing Heritage Foundation—a think tank funded by Koch family foundations, DonorsTrust, and other conservative funders—which has been attacking the 1619 Project for two years. On the foundation’s website, one author called it “a misguided approach to history” with “sins of omission” that will have a “detrimental civic impact.”

Heritage attempts to discredit the 1619 Project’s main thesis: that the U.S. was founded on slavery, a practice that began in the region in 1619, lasted for more than two hundred years, and was at the core of the colonies’ economic system. Like many of its conservative peer organizations, the Heritage Foundation tries to deny the existence of white supremacy in America. It alleges that the 1619 Project’s “real” purpose is to make American youth “despise their country,” rather than its obvious purpose—to accurately educate people about how the U.S. was founded and why enormous inequalities still persist today, so they can work to reverse these injustices over time. Heritage continues to attack the 1619 Project two years after its launch, issuing its most recent post on the subject on March 5, 2021, and even more recent articles in its publication, the Daily Signal.

The Claremont Institute, a nonprofit with a mission “to restore the principles of the American Founding to their rightful, preeminent authority” and co-founded by Hillsdale College’s Arnn, recently launched a new Washington, D.C.-based think tank, the Center for the American Way of Life, to counter what it refers to as “identity politics.” From its founding statement and a handful of blog posts, it appears that the center’s purpose is to oppose racial justice efforts.

Like many aggrieved white conservatives who feel threatened by racial demographic change and improving prospects for people of color, the center’s executive director, former Heritage Foundation staffer Arthur Milikh, thinks that acknowledging a history of racism and white supremacy is a personal attack on him and other white people.

“On one side stands the American way of life,” writes Milikh. “On the other side stands identity politics, which demands the perpetual punishment and humiliation of so-called oppressor groups combined with the unquestioned rule of the so-called marginalized.”

Milikh pits race consciousness against the very survival of the United States, calling mainstream acknowledgment of discrimination, as well as liberal immigration policies, “potentially fatal trends.” This framing evokes a central tenet of white nationalism, the idea that people of color will cause a “white genocide.” White nationalists in the U.S. and around the world have used the white genocide myth to justify deadly terror attacks on people of color, as the Southern Poverty Law Center explains.

While at the Heritage Foundation, Milikh wrote a report that argued against banning hate speech.

To fight the Left, conservatives “must speak clearly and confidently about the effects of radical feminism, ‘antiracism,’ and globalism,” Milikh wrote.

The essay is clear that “corrupt universities” and schools will be among the center’s targets.

Arnn is currently vice chair of the Claremont Institute, which has received funding from donors including the Sarah Scaife Foundation, the Lynde and Harry Bradley Foundation, the Charles Koch Foundation, and the foundation of investor, Council for National Policy member, and Claremont chairman Thomas Klingenstein.

The Koch-funded Texas Public Policy Institute held a webinar on March 1 about U.S. history. In the announcement, the institute lamented Biden’s decision to shut down the 1776 Commission and called the 1619 Project “a revisionist retelling of our nation’s story.”

As the national party solicits Trump’s help to raise money and strategize for the next election season, state lawmakers are emulating the ex-president’s moves. Republicans in at least five states introduced bills in the current legislative session to ban public schools from teaching the 1619 Project.

In Iowa, the representative who sponsored a bill to that end called the program “leftist political propaganda” and “revisionist history.” Rep. Skyler Wheeler argued that the U.S. could not have been founded on racism and slavery because, hundreds of years later, it elected a Black president. On Feb. 9, the bill advanced out of committee.

This article previously stated that Thomas Klingenstein is a trustee of the Heritage Foundation, which is incorrect. It has been updated to reflect that.