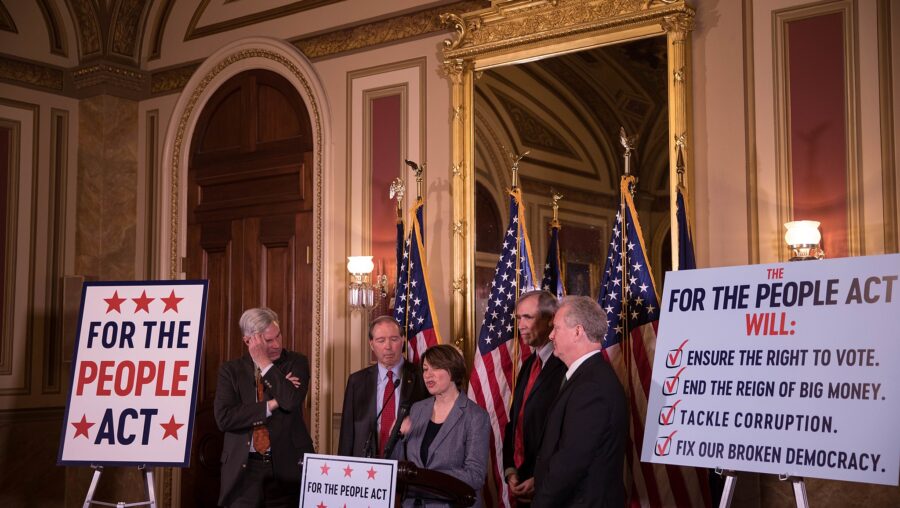 Democratic senators hold a press conference about the For the People Act in 2019. (Credit: Senate Democrats)

The bill has already passed the House but will have no chance of getting through the Senate, where Democrats have the slimmest possible majority, under the current filibuster rule that imposes a de-facto 60-vote hurdle to enact most legislation. As the stakes for voting rights become clear, pressure to eliminate the filibuster has intensified, but two Democrats, Sens. Joe Manchin (WV) and Kyrsten Sinema (AZ), still oppose that move.

In the face of a Jim Crow-level attack on voting rights led by Republicans in the majority of state legislatures, S. 1’s passage is crucial, says the Brennan Center for Justice.

“The landmark legislation would create a national baseline for voting access that every American can rely on, and it would foil state efforts to manipulate voting rules to exclude eligible voters or create discriminatory outcomes,” wrote several Brennan Center experts.

Because Republicans believe that their electoral success relies on limiting the number of people and kinds of people who can vote, right-wing groups closely allied with the GOP are focused on preventing the bill’s passage. Conservative groups are using ads, activist tool kits, social media posts, statements, and letters to Congress to attack S. 1 and its House equivalent, H.R. 1, sometimes with falsehoods about its contents.

The numerous conservative groups trying to block S. 1 include the pay-to-play business group the American Legislative Exchange Council, members of the State Policy Network, and the secretive, Christian Right coalition the Council for National Policy.

Heritage Action, the political arm of the think tank the Heritage Foundation, is promoting false information about the For the People Act, which it calls “The Corrupt Politicians Act.” This campaign appears to be part of Heritage Action’s $10 million effort to suppress the vote.

Heritage Action’s “Save Our Elections” tool kit provides talking points, call notes for members of Congress, social posts, and graphics for use. 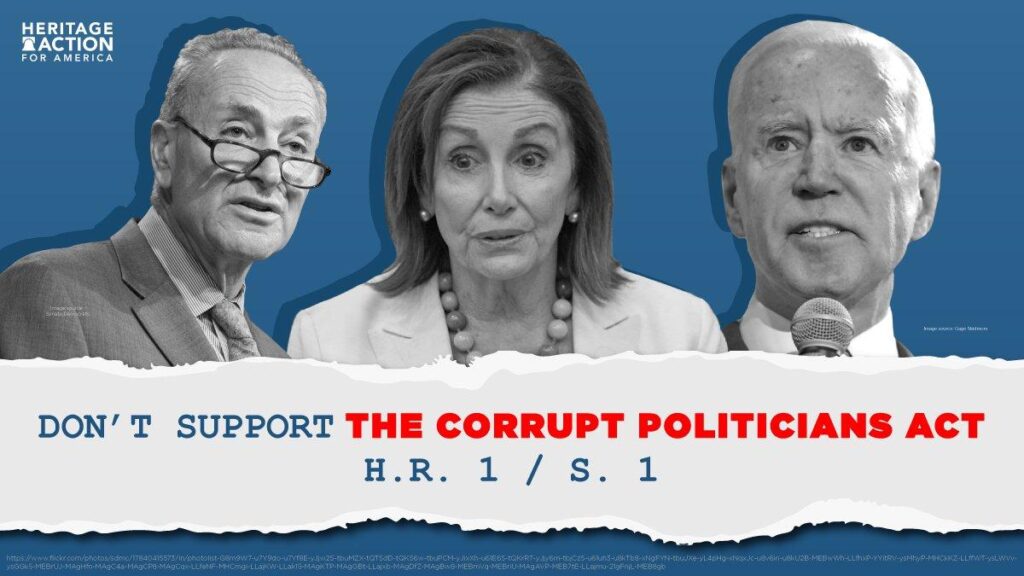 The main falsehood from Heritage Action is that taxpayers would fund political campaigns. H.R. 1/S. 1 funds voluntary public campaign financing for federal House and Senate candidates with a surcharge on federal fines, penalties, and settlements for certain tax crimes and corporate malfeasance—not with tax dollars.

McConnell is lying about S.1. He said during the Rules Committee hearing that the bill would allow for "taxpayer-funded bumper stickers and attack ads."

Both S.1 and H.R. 1 specifically block taxpayer funds from being used for their public campaign financing programs. pic.twitter.com/zXfYoEISh5

Another Heritage Action social media graphic even falsely claims that “H.R. 1 would allow politicians to take a second salary from their campaign funds.” Anti-Muslim hate group ACT for America also spread this misinformation (alongside a Martin Luther King, Jr. quotation), prompting the nonpartisan Campaign Legal Center to debunk the claim.

American Action Network (AAN), the biggest dark money group tied to House Republicans, began an ad campaign on March 1 targeting 51 Democrats. AAN ran radio ads in all of those districts and digital ads in 15 swing districts, including that of Rep. John Sarbanes (MD), the primary sponsor of H.R. 1.

While AAN, Heritage Action, and Republican elected officials attempt to brand the public campaign financing program as corrupt, the purpose of the program is just the opposite: to lessen corporate influence of politicians by allowing candidates to more easily raise campaign funds without the help of business PACs. Democrats named the program the “Freedom From Influence Fund.”

Heritage Action teamed up with the anti-LGBTQ Family Research Council, FreedomWorks, and the Tea Party Patriots to organize a rally in West Virginia to pressure Manchin to oppose S. 1, as well as H.R. 5, a bill to expand protections for LGBTQ people, and to protect the filibuster. Heritage Action bused in participants from out of state and provided free lunch for them, according to Documented.

Sen. Ted Cruz (R-TX) sought the help of American Legislative Exchange Council (ALEC) state lawmakers to oppose S. 1 on a call the Associated Press reported on over the weekend.

“H.R. 1′s only objective is to ensure that Democrats can never again lose another election, that they will win and maintain control of the House of Representatives and the Senate and of the state legislatures for the next century,” Cruz lied to an unknown number of those affiliated with the pay-to-play operation, where legislators and corporate lobbyists meet behind closed doors to adopt model legislation on a broad range of public policy issues.

Cruz reportedly held a rally in West Virginia targeting Manchin on March 20 alongside the Council for National Policy (CNP), a secretive Christian Right group with deep ties to the Trump administration. CNP operatives that reportedly spoke at the rally include: Eric Berger, co-founder of FreeRoots; Jake Hoffman, president and CEO of Rally Forge; Ken Blackwell, board member of CNP Action and former Ohio secretary of state; Kelly Shackelford, chairman of CNP Action and president and CEO of First Liberty Institute; and Mike Thompson, senior vice president of CRC Advisors.

Local reporting from the rally showed that a small rally occurred, but CMD could not confirm that any of the above were in attendance.

The Republican Attorneys General Association (RAGA), also known as the “corporate attorneys general” for its pay-to-play arrangement that offers greater access to the attorneys general based on the amount one contributes to the group, appears to be working to prevent S. 1’s passage.

Twenty Republican attorneys general sent a letter on March 3 to Senate and House leadership that highlighted the “Act’s constitutional vulnerabilities” and threatened a lawsuit, stating, “Should the Act become law, we will seek legal remedies to protect the Constitution, the sovereignty of all states, our elections, and the rights of our citizens.”

Republican Secretaries of State in 15 states and the lieutenant governor of Alaska also submitted a short letter opposing H.R. 1/S. 1 in which they claim that the bills “intrude upon our constitutional rights and further sacrifice the security and integrity of the elections process” without specifying how or in what ways.

Alabama Secretary of State John Merrill, who led the effort, was selected by the Republican State Leadership Committee to chair its National Commission on Election Integrity in February.

The latter group recently hired Trump chief of staff Mark Meadows and Cleta Mitchell, a top voter suppression attorney who resigned from her law firm after media reports that she was on Trump’s infamous call with the Georgia secretary of state, urging him to “find” thousands of votes to afford him a victory there in 2020. Meadows was also on that call and days earlier had traveled to Georgia, where he pushed the voter fraud myth. He could face scrutiny in a Georgia criminal probe of Trump’s actions. Mitchell and the Conservative Partnership Institute, which is planning to create a dark money machine, will reportedly target H.R. 1.

The Heritage Foundation has published several anti-H.R. 1 blogs, including one by its president, Kay James, which alleges that fraud, mismanagement, and “last-minute election rules changes” (due to the pandemic) caused Americans to lose faith in their elections.

Former Vice President Mike Pence is now a Heritage fellow, and his first publication was an anti-H.R. 1 essay for Daily Signal, Heritage’s online media site. The essay, a call for increased “election integrity,” cites unproven “significant voting irregularities” and claims that the bill will offer more opportunity for election fraud.

The non-profit People United for Privacy, launched as a project of the State Policy Network in 2016 to protect nonprofit donors from public scrutiny and to support efforts at the state and federal level to prevent disclosure of donors to governments, is also actively working to oppose H.R. 1 and S. 1.

People United for Privacy, which received $1 million in dark money from Leo funding vehicles the Wellspring Committee (2018) and Rule of Law Trust (2019), organized a letter to Congressional leaders to “reject” the bills and, again, perpetuated the lie that the bills “would violate the First Amendment rights of Americans.”

A large number of State Policy Network members signed onto the letter, as well as Charles Koch’s Americans for Prosperity and Libre Initiative.

A messaging kit distributed by People United for Privacy at the State Policy Network 2019 Annual Meeting recommends “key words and phrases to move hearts and minds” on fighting donor disclosure proposals such as those included in the For The People Act. For example, in “laying out principles” it recommends using “freedom of speech” and the “first amendment,” and in “characterizing the threat,” it advises utilizing “corrupt politicians” and “legalized corruption.”

Additional conservative organizations that put out statements and letters against the For the People Act include:

The Other Side of the Aisle

Nearly all Democrats in Congress are cosponsors of the For the People Act, and it passed the House in a party-line vote of 220-210.

A coalition of nearly 200 organizations from labor, racial justice, voting rights, environmental, and other communities, the Declaration for American Democracy, is supporting the For the People Act.

The Sixteen Thirty Fund, a major dark money donor to liberal election spending groups, told HuffPost that it “unequivocally supports the For The People Act and its historic provisions to strengthen our democracy by expanding voting rights, enhancing ethics rules, and reforming campaign finance regulations.”