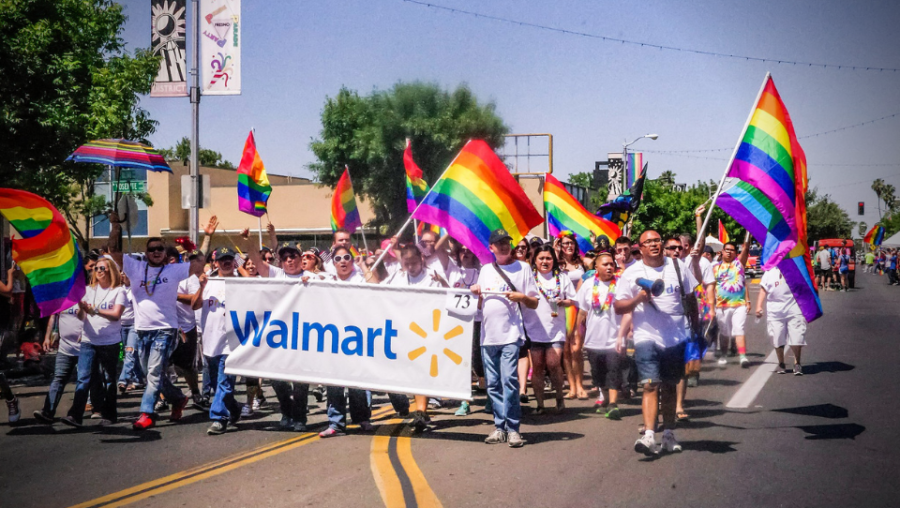 Walmart PRIDE, the company’s LGBTQ employee resource group, “aims to make Walmart the most diverse, inclusive company it can be,” writes a co-chair of the group on Walmart’s website. I think it’s working.”

The largest private company in the U.S., Walmart donates to numerous LGBTQ groups and sponsors dozens of Pride events each year (and profits from selling Pride gear). While its billionaire owners are right-wing Christian fundamentalists, the retail behemoth has over the last decade rebranded as an LGBTQ advocate.

The Human Rights Campaign, a prominent LGBTQ rights organization, gave Walmart a perfect score of 100 in its 2021 Corporate Equality Index.

But the company’s political contributions haven’t been so good for LGBTQ residents in its home state of Arkansas. In fact, its campaign donations have helped elect dozens of state lawmakers who sponsored and passed multiple anti-LGBTQ bills in the last few weeks.

Gov. Asa Hutchinson signed a bill, SB354, that bans transgender girls and women from competing in women’s sports on March 25. Then, on March 30, the legislature passed HR1570, a law banning gender-affirming health care for minors and even encouraging insurance companies to deny coverage for transition-related care for both kids and adults. Arkansas is the first state in the nation to pass such a health care ban, which awaits the governor’s signature.

Last week, the governor also signed a law that allows doctors to refuse to treat someone based on religious or moral objections, which will allow them to deny LGBTQ people care.

Walmart is one of the biggest corporate donors to the many sponsors of these two bills, with the company and its political action committee (PAC) having given $160,000 to their campaigns over their political careers, according to data compiled by FollowtheMoney.org and analyzed by the Center for Media and Democracy (CMD). Only three donors have given more: the state health care and realtors associations and DBH Management Consultants, a lobbying firm run by former state representative Bruce Hawkins.

Some of these companies, and many others that have aided the careers of anti-trans lawmakers in Arkansas, allege that they stand with transgender people and the LGBTQ community in general.

AT&T, the largest telecommunications company in the world, proudly touts its history of supporting the LGBTQ community. It supports the federal Equality Act and “has a strong partnership with GLAAD, the world’s leading LGBTQ+ media advocacy organization.”

Today, we observe the lives lost to anti-transgender violence. We pledge to do our part to #TurnUpTheLove today & every day. #TDOR pic.twitter.com/k0aR4gqZyv

UnitedHealth Group, the biggest health insurer in the U.S., highlights its perfect score from the Human Rights Campaign and celebrates Pride month, sponsoring some Pride events. But the company and its PAC have delivered over $31,000 to sponsors of SB345 and HR1570. Most of that total, over $27,000, went to lawmakers who sponsored either the health care bill or both bills.

CVS Health got a rating of 90 from the Human Rights Campaign and previously earned 100. The company publicly supports LGBTQ issues and came out against the Trump administration’s rule that reduced health care protections for trans people. But CVS Health, its PAC, and CVS Caremark have given nearly $25,000 to the campaigns of anti-trans bill sponsors, including $21,000 to sponsors of the health care law.

Altria, American Electric Power, Cox, Entergy, Merck, and Union Pacific, and other businesses celebrate their LGBTQ inclusivity but have donated tens of thousands of dollars to anti-LGBTQ lawmakers in Arkansas directly or through their PACs. (Altria, its PAC, and its subsidiary Philip Morris USA have donated to the sponsors. Cox Enterprises’ subsidiary, Cox Communications, is listed as a donor to the sponsors on FollowtheMoney.org.)

None of the companies that responded to CMD’s request for comment answered questions directly about the Arkansas legislation.

Merck told CMD that the company is proud of its diversity and inclusion efforts and high rating from the Human Rights Campaign.

“Merck engages in the political process to inform lawmakers and candidates about policy issues important to the biopharmaceutical industry,” the company said. “We certainly do not agree with every position that every recipient of PAC support takes on every important social and business issue.”

Union Pacific spokesperson Tim McMahon told CMD that the company typically gives to candidates and organizations of both major parties. “The events of Jan. 6, 2021, in Washington, D.C., have made us pause contributions and evaluate future contributions overall,” he said.

American Electric Power and its subsidiary Southwestern Electric Power “are committed to creating a workplace that is free of discrimination and fostering a culture that supports our diverse workforce, including our LGBTQ employees,” spokesperson Tammy Ridout told CMD.

“We work with leaders from both political parties on issues that affect our ability to deliver reliable and affordable electricity to our customers,” she said. The company also paused all political contributions in January and is reviewing its political activity guidelines “to ensure they represent the interests of our customers, employees and investors.”

ExxonMobil has a poor record on LGBTQ issues but recently earned a score of 85 in the Human Rights Campaign’s rankings. The company and its PAC have given $71,000 to the anti-trans bill sponsors. Spokesperson Casey Norton told CMD, “We continually review all PAC contributions. Previous contributions to a candidate do not indicate that the ExxonMobil PAC will contribute again in the future.”

The Arkansas State Chamber of Commerce is also a top donor, having given $157,000 to the anti-trans bill sponsors. The Chamber has not opposed either bill, but it did speak out against SB289, the religious and moral objection legislation, when it first went before a House committee.

The Arkansas Chamber, AT&T, CVS Health, Cox, Entergy, and UnitedHealth Group did not respond to CMD’s requests for comment. Altria emailed with CMD but did not provide comment.

Many of these companies and trade associations also make a habit of donating to anti-LGBTQ members of Congress, as Popular Information has documented.

In the wake of the deadly Capitol insurrection, some companies claimed they would halt congressional campaign donations to the Republicans who voted against certifying Joe Biden’s 2020 victory, or halt all congressional donations, but some have already begun to backtrack or funnel their donations through national GOP groups.

Many state legislatures are attacking their transgender constituents. The legislation and accompanying advocacy is a coordinated effort among right-wing lawmakers and activists to discriminate against trans people after they failed to block gay marriage and anti-trans bathroom bills backfired.

The coalition, which includes partners such as hate group the Family Research Council and the right-wing Ethics and Public Policy Center, formed to oppose the federal Equality Act and to offer model legislation to state lawmakers. Legislators can also sign the “promise,” which includes banning gender-affirming health care to minors and trans women and girls from sports.

One lawmaker who signed the pledge is Arkansas Rep. Robin Lundstrom, the primary sponsor of HB1570.

Alliance Defending Freedom told The 19th that it has consulted on some anti-LGBTQ legislation this year. Last year, it worked with an Idaho state lawmaker to draft the state’s anti-trans sports bill. The Family Policy Alliance sponsored a Republican anti-trans resolution in 2018.