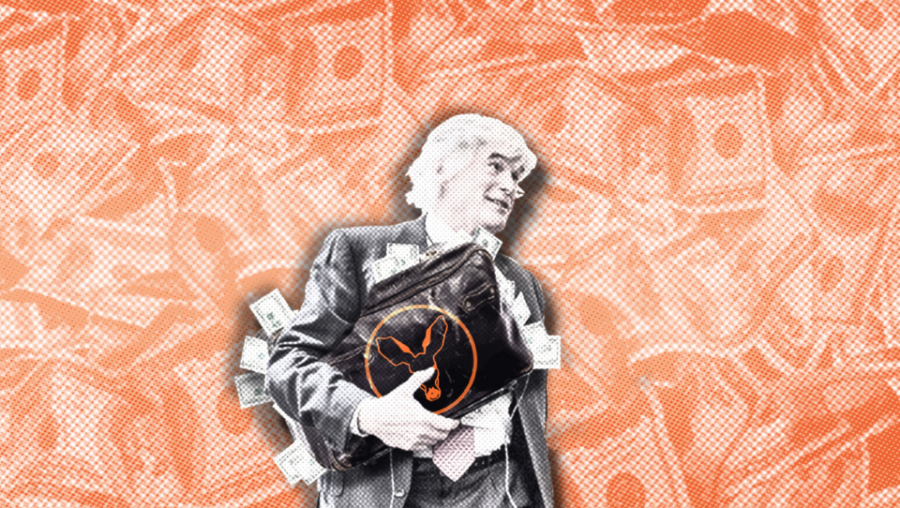 Donors gave the prominent white nationalist hate group VDARE $4.3 million in 2019, over eight times more than the year before, according to tax records the Center for Media and Democracy (CMD) obtained and shared with Southern Poverty Law Center’s Hatewatch.

The large sum represents an unprecedented annual haul for an American white nationalist group and suggests that big-money donors of the conservative movement may be moving their riches to more extreme causes in the aftermath of Trump’s rise.

In an era where white nationalists increasingly embrace decentralized online activism, VDARE stands out for its organizational prowess and links to power. Hatewatch connected former Trump administration officials Stephen Miller and Julia Hahn to its founder, Peter Brimelow, in a series of stories. (Miller invited Brimelow to speak at Duke University when he studied there, and Brimelow referred to a writers workshop Hahn attended with him in private emails leaked to Hatewatch.) Celebrity anti-immigrant columnist Ann Coulter contributes to the group’s online publication. Fox News pundit Laura Ingraham retweeted a VDARE post blaming non-white workers for a COVID-19 outbreak last year.

Even with such visible ties to the mainstream right, VDARE embraces an agenda that directly or indirectly cultivates a radical far-right world view in its sympathizers. Brimelow’s group published apologia about both a terrorist’s manifesto in 2019 and the deadly 2017 “Unite the Right” rally in Charlottesville, Virginia, on its third anniversary. The group promotes the white genocide conspiracy theory, which many view as having inspired far-right terror attacks in Pittsburgh, Pennsylvania; El Paso, Texas; and Christchurch, New Zealand, in recent years. Unite the Right organizer Jason Kessler published a post on VDARE’s website titled “Yes, Virginia (Dare), There Is Such A Thing As White Genocide,” less than two months before a neo-Nazi murdered antiracist demonstrator Heather Heyer at his event. VDARE has also written in romantic terms about the insurrection waged on the U.S. Capitol on Jan. 6.

Hatewatch and the CMD reached out to Brimelow for a comment on this story.

Mainstream Funding for a Radical Agenda

VDARE’s recent fundraising prowess coincides with the Republican Party’s embrace of the anti-immigrant, anti-democratic worldview promoted by former President Trump and his followers. Total donations to the VDARE Foundation, the nonprofit that funds the group’s operations, surged throughout the Trump era, CMD found, culminating with an increase of nearly $4 million from 2018 to 2019. (Donors gave VDARE roughly $385,000 in 2017 and $500,000 in 2018, tax records show.)

DonorsTrust, a right-wing funding vehicle tied to Charles Koch, the Mercer family and other like-minded billionaires, pumped $1.5 million into VDARE in 2019, CMD previously reported. These tax records demonstrate that the dark money flowing from DonorsTrust accounts for only a little more than a third of VDARE’s revenue from that year. DonorsTrust CEO Lawson Bader gave the following statement in response to the findings in this story:

DonorsTrust allows its donor-advisors, and not DonorsTrust itself, to create a list of preferred and legally-recognized charitable and public-interest organizations (that are legally created and recognized by the Internal Revenue Service and receive less than 25% of revenue from government) that they individually wish to support. We support philanthropic freedom and protect donor intent without taking policy positions. Of the policy groups that our accountholders support, many have competing purposes and mission, such as the Family Research Council and the Sex Workers Educational Foundation.

In February 2020, VDARE paid $1.4 million in cash to purchase a castle in Berkeley Springs, West Virginia, establishing for themselves a base that is less than a two-hour commute from Washington, D.C., as Hatewatch previously reported. The purchase provides a small window into how VDARE may be spending their newly acquired wealth.

During the Black Lives Matter demonstrations in June 2020, following the murder of George Floyd by a Minneapolis police officer, VDARE impersonated journalists from VICE Canada and asked antiracist protesters to identify themselves by name and face to their audience on YouTube. Facebook and YouTube have since suspended VDARE’s accounts. The group also stumped for the defense team of Derek Chauvin, the Minneapolis police officer a jury convicted in April of murdering Floyd.

The big increase in revenue worked out well for Brimelow, whose salary nearly doubled from the year before. According to the documents, Brimelow made about $182,000 in 2018. In 2019, VDARE paid him roughly $345,000. The VDARE Foundation appears prepared to maintain his salary, as the nonprofit ended the year with over $3.5 million in the bank.

“My salary did not double,” Brimelow wrote in his email response.

DonorsTrust and other similarly structured funds donate to many hate groups every year, beyond VDARE. DonorsTrust, which Mother Jones has called the “dark-money ATM of the conservative movement,” is a donor-advised fund (DAF) sponsor, meaning that it manages individual charitable accounts for its clients for a fee. These clients, who can shield their identities from the public by using DonorsTrust, “advise” DonorsTrust about where the money should go, but the organization has complete legal authority to decide which organizations will receive the money.

To qualify for a tax deduction, donors must contractually surrender ownership of the assets to the DAF sponsor. Thus, DonorsTrust owns the money and can do with it what it chooses within the bounds of 501(c)(3) tax laws.

DonorsTrust CEO Lawson Bader’s claim that “donor-advisers” create the list of acceptable nonprofit recipients appears to misrepresent the facts. The fund’s own donor prospectus states that the group’s board of directors, which includes Bader, approves the recipients.

In 2019, DonorsTrust also provided $10,500 to the New Century Foundation, the nonprofit behind Jared Taylor’s white nationalist American Renaissance magazine and website. Taylor is hardly an obscure player in the American white supremacist movement. An associate of Brimelow, who shared a stage with him and Richard Spencer at an “alt-right” event in 2016, Taylor promotes dehumanizing pseudoscience on his website, including the myth that Black people are predisposed to be less intelligent than other races.

Few DAF sponsors limit the recipients of their funds beyond a requirement that these nonprofits be in good standing with the Internal Revenue Service. While DonorsTrust is by far the biggest known donor to white nationalist hate groups, it is not alone. Several commercial funding vehicles have been vehicles for financing hate for years.

Giant DAF sponsors including Fidelity Charitable – the largest charity in the U.S. – Vanguard Charitable and Schwab Charitable have all given to VDARE and other hate groups and did not change their practices significantly after Sludge exposed these donations. These charities are not legally tied to the affiliated investment companies, but they work together. For example, Fidelity Investments is not legally connected to Fidelity Charitable, but the latter pays the former for investment management services.

One foundation that formally ended its funding of VDARE is the Inland Northwest Community Foundation, now called the Innovia Foundation. For years, it had facilitated a wealthy donor’s contributions to VDARE. Despite repeated pleas from its CEO to adopt an anti-hate policy, it was only after national press attention, including from SPLC, that the foundation’s board did so.

Like many extreme far-right figures, Brimelow invests in Bitcoin. His cryptocurrency donor list included French computer programmer Laurent Bachelier, who donated to open admirers of fascism such as Andrew Anglin of The Daily Stormer and white nationalist Nick Fuentes. Bachelier gave a full Bitcoin (BTC) to VDARE before committing suicide on Dec. 8, 2020. (One BTC was worth around $19,000 at the time, but is now valued at around $40,000.)

Michael Edison Hayden is a Senior Investigative Reporter and Spokesperson for Southern Poverty Law Center. In addition to breaking many stories on the extremism beat, he wrote the guide to OSINT reporting for Columbia University’s Tow Center.

All articles by Michael Edison Hayden