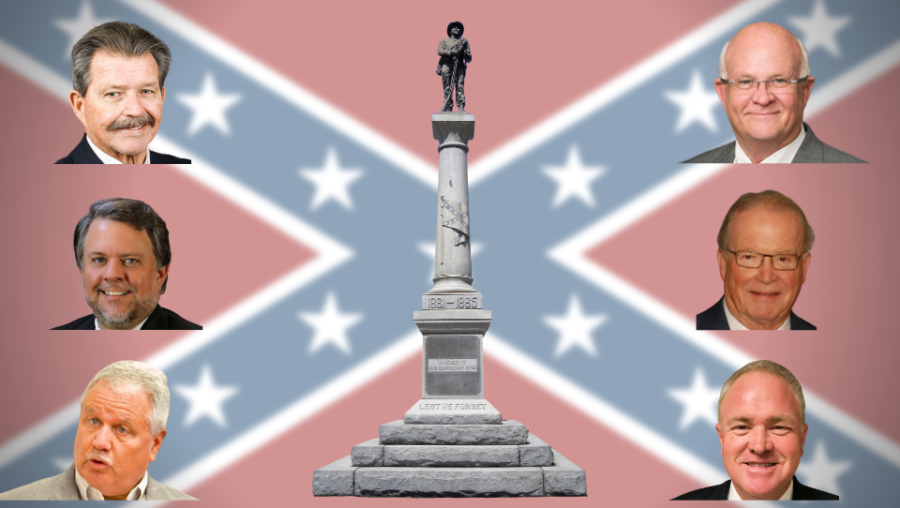 Image adapted from photo of a Confederate monument in Gulfport, Mississippi by Woodlot/Wikimedia.

At least six state lawmakers affiliated with the American Legislative Exchange Council (ALEC) were recently active members of the Sons of Confederate Veterans (SCV), a neo-Confederate network that puts up and defends monuments to the Confederacy, the Center for Media and Democracy (CMD) has found.

In April, Atlanta Antifascists released SCV’s membership data from late 2016 to early 2018 and exposed five Georgia state lawmakers as active members. The Guardian followed up with a story that revealed serving military officers, elected officials, and public employees who belonged to the group.

SCV, which was founded in 1896, has launched increasingly aggressive campaigns against the removal of Confederate monuments through legal action and provocations, including flying Confederate flags near public roads and at NASCAR races.

Members of SCV include a prominent white nationalist and people who participated in and committed acts of violence at the deadly 2017 Unite the Right rally in Charlottesville, Virginia. SCV has historically been tied to white supremacist groups, and some members also belong to violent League of the South, a neo-Confederate hate group.

In mid-2020, ALEC CEO Lisa Nelson signed a letter supporting a Donald Trump executive order that instructed the attorney general to prioritize criminal prosecutions for the destruction of monuments on federal property, with prison sentences of up to 10 years. Trump issued the order in direct response to activists who damaged or removed Confederate monuments. The order directed federal agencies to withhold federal funding from cities that do not protect monuments from demonstrators, and it highlighted portions of Trump’s order that cast racial justice protesters as “rioters, arsonists, and left-wing extremists” and “the mob.”

A 2016 guide for protecting Confederate monuments written by the top leadership of SCV urged its members to run for office so they can prevent the removal of these monuments.

“In these fights, having our members or supporters in elected positions is paramount,” said the manual. “Having our people run for elective office cannot be overemphasized.”

CMD has found that multiple state legislators affiliated with ALEC and SCV have used their elected offices to advance SCV’s mission.

ALEC keeps its membership secret, but CMD has been tracking known members and conference attendees for years, often using public records requests to do so. When CMD obtains information connecting a politician with ALEC, we assume that connection is still active until we receive information to the contrary.

ALEC Press Secretary Alexis Jarrett told CMD that the following politicians are not current ALEC members. However, many lawmakers allow their memberships to expire and rejoin just before the organization’s annual meeting. Legislators may purchase one- or two-year memberships.

Georgia Rep. Alan Powell, an active SCV member and ALEC member as of 2019, along with ALEC-linked legislator Sen. Steve Gooch and others, was a sponsor of SB 77, a 2019 bill signed into law that imposes large fines on those who damage monuments. The law specifically names Confederate and other military memorials. Powell was the only state representative to sponsor the bill, which originated in the Senate. The primary sponsor was Sen. Jeff Mullis, an active SCV member.

Active SCV member Jabo Waggoner, who was affiliated with ALEC as of 2002 and is the rules chair in the Alabama Senate, was a sponsor of an unsuccessful 2015 bill to protect Confederate monuments. The Alabama Heritage Protection Act would have outlawed the removal or relocation of monuments on public property that honor participants in 17 different military campaigns, including the Civil War. Two years later, another co-sponsor of that bill introduced the similar Memorial Preservation Act, which became law. Waggoner voted for the bill.

Florida Sen. Dennis Baxley, a SCV member who has echoed white nationalist talking points and is a former ALEC member, introduced a bill in 2019 that would have prohibited local governments from altering memorials, including road names, that honor “heroes,” including soldiers, cops, firefighters, and astronauts, but not civil rights leaders. Baxley has consistently opposed removing monuments to the Confederacy, and in 2017 he initially blocked a bill to install a slave memorial. The senator first joined ALEC in 2011, and his membership expired this year.

George “Chip” Campsen III, a South Carolina senator and ALEC member as of 2009, is the son of the late SCV member and former legislator George Campsen, Jr. The younger Campsen was a sponsor of his state’s Heritage Act of 2000, which removed the battle flag from atop the Statehouse dome but moved it to another location on state House grounds and prohibited the removal of Confederate flags and monuments from public land without a joint resolution and two-thirds vote from the legislature. Since the 1960s, Campsen’s family has run a business that offers tours of Fort Sumter, the site of the Civil War’s first battle, and Campsen is a manager at the company.

Current South Carolina Sen. Harvey Peeler, an SCV member as of 2020 who is not affiliated with ALEC, voted against the 2000 bill. Just three weeks after the white nationalist massacre of nine Black churchgoers in Charleston in 2015, Peeler was one of only three votes against removing the Confederate flag from state House grounds.

Former North Carolina senator Louis Pate, who was an ALEC member as of 2017 but does not appear on the SCV roster, co-sponsored a 2015 law that protected monuments.

In Virginia, Delegate Hyland “Buddy” Fowler, an active SCV member who was affiliated with ALEC in 2019, spoke at a rededication ceremony for a Confederate monument in 2014, saying, “They say a nation that forgets its heroes will not be sustained.”

South Carolina Sen. Danny Verdin (R), a longtime SCV member who was an ALEC task force member as of 2011, has served as president of South Carolina’s SCV chapter. Along with Peeler, Verdin was one of three votes against removing the Confederate flag from state House grounds. Back in 2000, he reportedly helped organize a rally to defend the flag’s position atop the state Capitol with a local leader of the white nationalist hate group the Council of Conservative Citizens.

Georgia Rep. Terry England (R), an active SCV member, is chair of the Georgia House’s Appropriations Committee. He was an ALEC task force member as of 2010.

Baxley, Campsen, England, Fowler, Powell, Verdin, and Waggoner did not respond to emailed questions about their SCV and ALEC membership status and their opinions on monuments and the Civil War. ALEC’s Jarrett did not respond to CMD’s question about whether these lawmakers had attended ALEC meetings.

SCV raises money through membership dues, investment income, and donations. The group’s fiscal year 2019 tax return shows that SCV took in $1.8 million that year, including nearly $1.3 million in contributions and grants (mostly membership dues), $313,000 in investment income, $24,000 in program service revenue, and $205,000 in “other” revenue (including magazine subscriptions).

SCV members are required to pay dues of $35 each year or a larger amount for a lifetime membership, according to documents obtained by CMD. The group uses Amazon Smile and Paypal to raise money online.

Donors to SCV include the Southern Cultural Foundation, a nonprofit that counts neo-Confederate historian Donald Livingston as a trustee. Livingston was the first director of the League of the South Institute for the Study of Southern Culture and History. He has been a faculty member of the neo-Confederate Ludwig von Mises Institute, and he co-founded the Abbeville Institute, named after the birthplace of fierce slavery advocate John Calhoun.

Livingston is also on faculty at SCV’s Stephen D. Lee Institute along with several other neo-Confederate academics, including Thomas DiLorenzo and Marshall DeRosa, who have both been affiliated with the League of the South, the Mises Institute, and the Abbeville Institute, and have links to Charles Koch-funded academic programs.

Other SCV donors include donor-advised fund sponsors the Give Back Foundation, the Morgan Stanley Global Interest Funding Trust, and the PayPal Charitable Giving Fund, as well as the Frank J. and Lucy C. Harzog Memorial Foundation and the Polycarp Foundation.