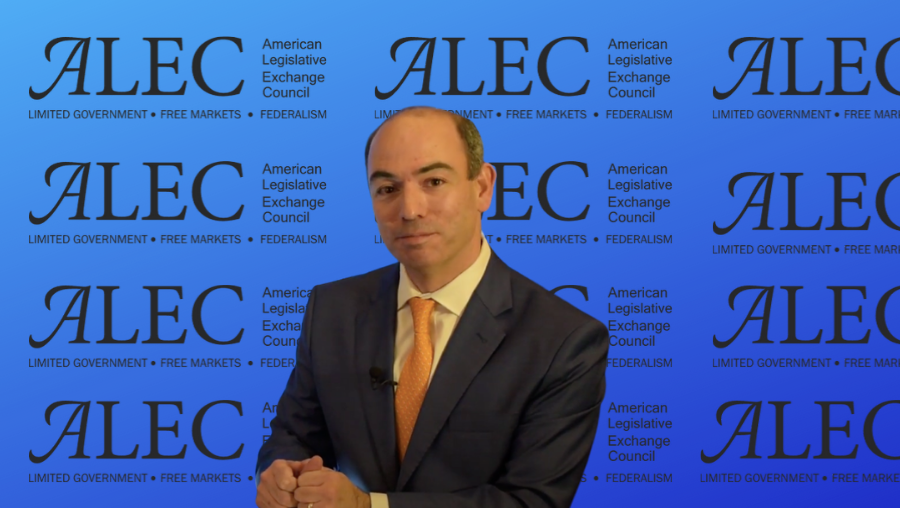 The American Legislative Exchange Council (ALEC) has a history of defending controversial and harmful legislation, but the man behind ALEC’s public relations machine, Bill Meierling, has defended actions far worse than anything done by ALEC.

Meierling helped set up the information ministry of Equatorial Guinea for the country’s tyrant, Obiang, and in the Democratic Republic of Congo he advocated for Joseph Kabila’s illegal attempt at a third term as president.

A “former member of ALEC who grew disillusioned with the organization” sourced the materials for this story to the Center for Media and Democracy (CMD), which were confirmed through Foreign Agent Registration Act filings. Anyone representing the interests of a foreign government has to register as a lobbyist and disclose their activities.

Meierling officially joined ALEC in January 2013 as executive vice president for external relations and strategic partnerships. As head of the group’s spin machine, he has since retained that role and become the chief marketing officer. Meierling “manages crisis response and provides senior level counsel to investor-, government-, and public relations divisions of Fortune 500 member companies regarding state and federal advocacy; environmental, social and governance (ESG) activism; and other concerns.”

In Meierling, ALEC found an experienced propagandist who led the organization through a donor crisis and member exodus when its promotion of “Stand Your Ground” legislation was tied to the death of the unarmed Black teenager Trayvon Martin. He managed PR when Google’s executive chairman said ALEC was “literally lying” about the climate emergency, and when corporations again dropped ALEC for its keynote speaker David Horowitz’s racist and bigoted remarks at a 2018 annual meeting.

Before joining ALEC, Meierling ran his own PR firm, OpinionMakers International. Through OpinionMakers, he was hired in 2007 as a subcontractor of lobbying firm Cassidy & Associates to work for the Equatorial Guinea government and President Teodoro Obiang. He was paid handsomely, raking in $15,000 a month in fees for his firm. Cassidy and Associates made headlines with their work for Obiang when an executive bragged about how they were able to get Obiang off Parade Magazine’s top ten list of worst dictators. Obiang only “improved” to being ranked the world’s 13th worst dictator.

Meierling fondly recounted his time in Equatorial Guinea in an interview, saying, “I was brought there in the mid 2000’s to help train them and help prop up the information ministry within the country.” The Ministry to which he referred is not so much one of information as it is propaganda. In its 2007 Freedom of the Press Report, the organization Freedom House described Equatorial Guinea as having “virtually no independent media” and stated that “all domestic radio and television stations are owned directly by the government or by the president’s family. State-owned media are dominated by sycophantic coverage of the government and the president.” The country still ranks at the bottom of Freedom House’s rankings with no independent journalism or freedom of speech.

The coverage by state run media is so atrocious, a presidential aide once compared President Obiang to God while on a radio interview in 2003. “He [Obiang] can decide to kill without anyone calling him to account and without going to hell because it is God himself, with whom he is in permanent contact, and who gives him this strength,” said the aide. Obiang uses the state controlled media to stay in office, most recently in 2016 when he won a sham election with over 90 percent of the vote.

“It was just an incredible opportunity to build something from the ground up and to work in a developing nation with the people and the government that was really interested in growing, changing, and telling their story,” Meierling said of his work in Equatorial Guinea.

As part of that job, Meierling specifically worked to spin the dictator’s dismal human rights record.

In August of 2007, Meierling wrote a press release highlighting a visit by the United Nations Working Group on Arbitrary Detentions and the Equatorial Guinea’s supposed progress on “deprivation of liberty” and other human rights abuses.

Whatever progress allegedly occurred, however, was short-lived. In October of 2007, opposition party member Salvador Ndong Nguema died from injuries after being tortured in prison.

Later in 2010, four political opponents of President Obiang were abducted by Equatorial Guinean security forces in Benin after fleeing the country years earlier. They were held in the notorious Black Beach prison, where they allegedly confessed to a 2009 attempted coup. The military executed them after a brief military trial. Human rights observers viewed the military trial as a sham and believed the men were coerced to confess after being tortured.

Meierling also consulted with Equatorial Guinea on the development of its oil industry. In 2008, he wrote a press release for the government highlighting a trip by Sen. Johnny Isakson (R-Ga.) to the country’s new liquefied natural gas facility. A biography on Meierling for another PR firm that was recently removed described his work on the project and touted his connections to the Obiang regime. “When the Republic of Equatorial Guinea and Marathon Oil sought American support for construction of the world’s largest LNG export train from Bioko, Malabo, Equatorial Guinea to Elba Island, Georgia, the African nation’s leadership turned to him,” it said.

While the country’s oilfields have proven to be plentiful, the average citizen of Equatorial Guinea still lives in poverty. Despite having a per capita gross domestic product higher than that of Brazil and China, the country ranks 141st out of 189 on the United Nations Human Development Index.

Meierling has also worked for Obiang’s son, Teodorin, directly. In March, Meierling’s website listed Teodorin and his girlfriend at the time, Eve, as former clients for “reputation” management services, but the content has since been removed.

Teodorin has been the subject of numerous corruption investigations, and has assets have been seized by U.S., French, Swiss, and Brazilian authorities based on what the U.S. Justice Department characterized as “relentless embezzlement.”

According to a 2010 U.S. Senate investigation,

From 2004 to 2008, Teodoro [Teodorin] Nguema Obiang Mangue, son of the President of Equatorial Guinea, has used U.S. lawyers, bankers, real estate agents, and escrow agents to move over $110 million in suspect funds into the United States. Mr. Obiang is the subject of an ongoing U.S. criminal investigation, has been identified in corruption complaints filed in France, and was a focus of a 2004 Subcommittee hearing showing how Riggs Bank facilitated officials from Equatorial Guinea in opening accounts and engaging in suspect transactions.

The report attributed the success of Obiang and his family’s ability to embezzle funds to the help they received from numerous lawyers, lobbyists, and consultants to gain influence.

In 2017, while working in his current capacity as chief marketing officer for ALEC, Meierling was paid $20,000 per month for public relations work by the Democratic Republic of the Congo (DRC). Meierling described the work done through a company called How Handy is That LLC as “strategic communications services” and reported that he would be “writing for, advising or representing the foreign principal.”

Documents disclosed in compliance with the Foreign Agents Registration Act show a series of op-eds appearing in the Washington Times in 2017, many of which attack Moise Katumbi, a candidate who was running in opposition to DRC President Joseph Kabila. While the articles are labeled as “sponsored,” none of them disclose the DRC government as the sponsor. One of the pieces authored by Meierling describes the electoral situation in the DRC as follows:

As President Joseph Kabila of the Democratic Republic of Congo (DRC) readies his country and its government for Congo’s next free and fair national election, some of the very opposition groups with whom he worked to arrange next year’s vote are coordinating with powerful forces outside of DRC who are deploying millions of dollars in foreign money to influence its outcome, undermine its integrity and financially benefit from its aftermath.

Meierling brazenly misinformed readers about the elections in the DRC when he described them as being “free and fair.” At the time, Kabila was illegally holding office, as his constitutionally limited two terms had expired in 2016.

Kabila’s government delayed the presidential election until 2018, claiming to need more time to update the country’s voter registry. Protests erupted in response to the delay, and the United Nations reported that government security forces killed 49 protesters.

The group Journalists in Danger “reported 121 cases of attacks on media from November 2017 to October [2018] and attributed 77 percent of these attacks to government agents, including nearly half to state security forces.”

Meierling is not currently registered as a foreign agent.

CMD reached out to ALEC for comment twice for this piece and received no response.