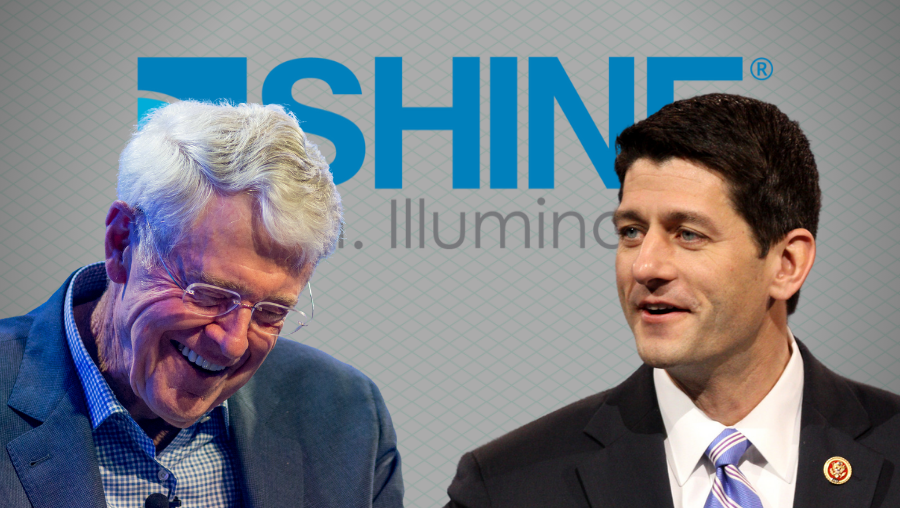 Two weeks after the U.S. House passed then-President Trump’s 2017 legislation that lowered tax rates on corporations and wealthy individuals, Charles and Elizabeth Koch each gave $247,000 to Republican House Speaker Paul Ryan’s fundraising committee, Team Ryan. Charles and his brother David, now deceased, stood to gain as much as $1.4 billion per year from the tax cut.

Ryan joined the board of SHINE Medical Technologies, a private company based in Janesville, Wisconsin, in the Congressman’s former district, eight months after leaving office in 2019.

SHINE, founded in 2010, describes itself as a “development-stage company working to become a manufacturer of radioisotopes for nuclear medicine.”

On June 28, 2021, SHINE announced that Koch Disruptive Technologies (KDT), a private equity company under the Koch Industries umbrella, was the leading member of an investor group making a $150 million investment to support the company’s “commercialization of its diagnostic and therapeutic medical isotope technologies.”

For its part, SHINE becomes part of KDT’s portfolio of “transformative” investments in robotic, biotech, AI, and other largely private technology companies.

Chase Koch, Charles’ son, is president of KDT. A disruptive technology is one that creates a new market and process that eventually replaces an established technology.

SHINE is heavily subsidized by governments at all levels. The Wisconsin Economic Development Corporation (WEDC), the state’s lead economic development agency, has granted KDT $13.2 million in tax credits and rebates, and has loaned the company another $4 million, making SHINE one of the state’s biggest private investments.

In 2019, SHINE received a $15 million grant for the development of medical isotopes from the U.S. Department of Energy (DOE). Building a new facility with the grant, which SHINE had to match, will make the company a major producer of medical isotopes used for procedures such as cardiac stress tests and cancer staging.

Between 2012 and 2019, the City of Janesville, where Ryan had his main congressional district office, gave $11 million in tax increment financing to SHINE as part of a deal to get it to move its headquarters to Janesville from Monona, Wisconsin, outside of Ryan’s district.

In 2019, and as part of the city’s tax deal, Janesville gave 91 acres of land to SHINE to build the medical isotope facility, partly financed by the DOE grant, which opened in 2021.

Koch Industries, the oil, chemical and manufacturing conglomerate, has received over $400 million in additional government subsidies, according to Good Jobs First’s Subsidy Tracker.

Charles Koch and his political network talk a good game against “special-interest handouts” and “corporate welfare”—and support eliminating popular tax deductions that benefit the middle class—but they are happy to squeeze out every tax break they can get for their corporate operations.

Koch has always said government subsidies, along with all government interventions in the economy, are bad for consumers, but a Koch spokesperson told The New York Times, “We will not put ourselves and our employees at a competitive disadvantage in the current marketplace.”

The $400 million in government subsidies obtained by Koch Industries does not account for subsidies in companies like SHINE that receive KDT investments.

While KDT invests in start-ups, Koch Investment Group (KIG) buys and sells stock in publicly traded companies, many of which also receive government subsidies. For example, KIG has a major stock position in drivetrain and axle manufacturer Dana Incorporated. Dana has received almost $250 million from the state of Indiana in the form of tax abatements and other subsidies.

In his public life, Paul Ryan was also a sharp critic of government programs, pushing to privatize Social Security and turn Medicare into a voucher program.

Now both the Kochs and Ryan are involved with one of the most heavily state-subsidized companies in Wisconsin.