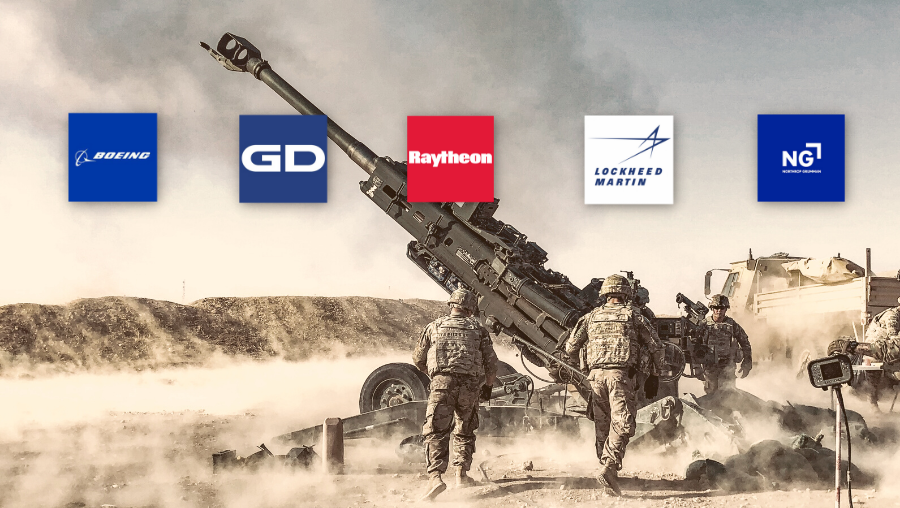 The Pentagon has spent an enormous amount of money—an estimated $14 trillion—in the 20 years since the U.S. invasion of Afghanistan in 2001 following the 9/11 terror attacks, according to a paper by William D. Hartung, director of the Arms and Security Program at the Center for International Policy. As much as half of that amount went to private defense contractors, with the five biggest companies scoring as much as one-third of these private contracts.

As these five companies—Boeing, General Dynamics, Lockheed Martin, Northrop Grumman, and Raytheon—earned up to $2.3 trillion in Pentagon contracts during the Afghanistan and Iraq wars, they collectively spent a considerable amount, over $1.2 billion, on federal lobbying and campaign contributions, according to data compiled by the Center for Responsive Politics and analyzed by the Center for Media and Democracy (CMD).

Meanwhile, these companies’ stocks combined to increase in value almost ten-fold over the past 20 years, and numerous members of Congress have personally benefited. According to an analysis by Sludge, a bipartisan group of at least 11 senators and 36 representatives own as much as $6.7 million worth of defense industry stocks, including all five of the defense giants.

Most or all of these members of Congress have voted to increase the military budget, and some voted to authorize the use of military force in September 2001 and to go to war with Iraq the following year. Some sit on the House’s Armed Services Committee, presenting a glaring conflict of interest, and many have received campaign donations from the companies’ political action committees (PACs).

The Pentagon has a cozy relationship with the major defense companies. For example, the current secretary of Defense, Lloyd Austin, sat on the board of Raytheon and made up to $1.7 million as he exited the company to run the Pentagon.

During the United States’ “forever wars” of the 21st century, the military industrial complex has profited enormously, and the companies surely helped steer huge sums of federal money into their corporate treasuries through their big lobbying and elections spending.

Boeing and Northrop Grumman Lead in Lobbying and Election Spending

The top overall spender was Northrop Grumman, with Boeing a close second, according to data compiled by the Center for Responsive Politics. Boeing spent the most of the five companies on lobbying, and Raytheon donated the most money to federal politicians.