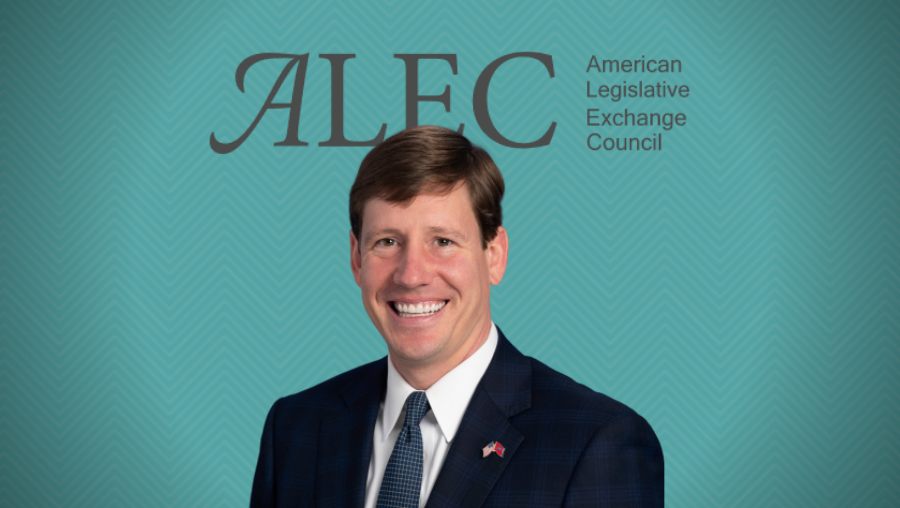 The alleged scheme involved illegal contributions to his 2016 congressional campaign passed through a state-level PAC and used by a political nonprofit to boost his election effort.

The American Legislative Exchange Council (ALEC) is a pay-to-play operation where legislators and corporate lobbyists meet behind closed doors to write model legislation that a radical right-wing, pro-corporate and pro-Republican agenda on everything from voter suppression and climate denial to crushing unions and undermining public education.

In addition to being state chair of ALEC, Kelsey is on ALEC’s national board of directors. The organization also recognized him as “Legislator of the Week” on May 21, 2018.

Kelsey and his alleged co-conspirator, Nashville social club owner Joshua Smith, are accused of conspiring to aid Kelsey’s 2016 congressional campaign by illegally funneling Kesley’s state campaign funds into his federal campaign. Kelsey’s campaign donated tens of thousands of dollars to Smith’s social club’s PAC, which gave the money to a conservative political group, the American Conservative Union (ACU), which then coordinated with Kelsey’s campaign to purchase ads in support of his congressional primary run. According to the DOJ,

The indictment alleges that Kelsey, Smith, and other unindicted coconspirators orchestrated the concealed movement of $91,000 to a national political organization for the purpose of funding advertisements that urged voters to support Kelsey in the August 2016 primary election, and that the conspirators caused the political organization to make $80,000 worth of contributions to Kelsey’s federal campaign committee in the form of coordinated expenditures. The indictment alleges other meetings and communications between the conspirators, resulting in the illegal transfers, contributions, and expenditures associated with Kelsey’s federal campaign.

If convicted, Kelsey could face up to five years in prison and a $250,000 fine on each of five counts.

According to the Tennessean, Kelsey’s wife, Amanda Bunning Kelsey, is an unindicted co-conspirator. At the time, the two were not married, and she was the director of government affairs for the ACU and on its senior management team, in charge of its political expenditures. The $91,000 went through the ACU into television ads in support of Kelsey. Along with Kelsey’s federal campaign, the ACU allegedly filed false campaign finance reports and lied to the Federal Election Commission about the ads it bought for Kelsey, claiming they were independent while actually coordinating with the candidate and his agents.

The ACU is a right-wing organization that hosts the Conservative Political Action Conference (CPAC), one of the nation’s largest gatherings of conservatives. Matt Schlapp, a corporate lobbyist and close ally of Donald Trump, is chairman of the ACU. The organization and its affiliated 501(c)(3) nonprofit have received funding from foundations associated with the Koch, Bradley, Mercer, and other GOP megadonor families.

After his indictment, Kelsey stepped down as chair of the Tennessee state Senate’s education committee, where he advocated for vouchers for private schools, a position supported by ALEC nationally.

Kelsey claimed his innocence and called his charges “a political witch hunt,” blaming them on President Joe Biden and Tennessee Democrats. However, the investigation into his campaign finances has gone on for years and began before Biden was president.

In the 2016 Republican primary for Congress, the election in which the laundering of money was alleged to have occurred, Kelsey finished fourth among 14 candidates, garnering 13% of the vote.

Aside from his state government role, Kelsey is managing attorney with the anti-union Liberty Justice Center, an affiliate of the State Policy Network, and has directed the Memphis Lawyers’ chapter of the Federalist Society. Over the years, Kelsey has delivered on ALEC’s agenda, leading anti-union cases and sponsoring bans on the state income tax and Medicaid expansion.