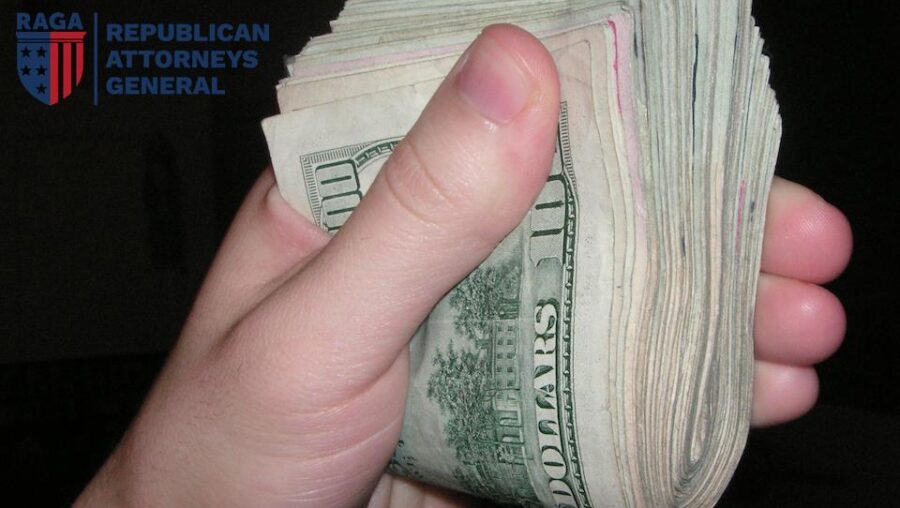 The Republican Attorneys General Association (RAGA) reported $6.1 million in contributions in the second half of 2021, according to a year-end report examined by the Center for Media and Democracy (CMD). That’s down from the $6.6 million RAGA raised in the second half of 2019, the most recent off-year, and demonstrates that the pay-to-play operation has yet to recover funding lost due to its involvement in the January 6 insurrection.

RAGA accepts unlimited contributions from corporations and special interest groups such as Koch Industries, the National Rifle Association, and Reynolds American, primarily to fund the campaigns of Republican attorneys general candidates. Together with the Rule of Law Defense Fund (RLDF), its 501(c)(4) affiliate, RAGA runs a cash-for-influence operation that coordinates the official actions of Republican state attorneys general and sells its corporate funders access to those AGs and their staff.

The U.S. Chamber Institute for Legal Reform, an affiliate of the U.S. Chamber of Commerce, topped all contributors to RAGA during the second half of 2021, donating $550,285 (or 9%) of its funding haul.

This is markedly down from the $2.5 million leading contribution in the first half of 2021, which came from a dark money group run by Leonard Leo, Trump’s go-to man for packing the federal courts with right-wing judges.

The tobacco company Reynolds American contributed the second largest amount – $253,560 – during the last half of 2021, and the telecommunications conglomerate Comcast Corporation was the only other donor to top $200K in cash to RAGA during this period. The online dating company Match Group and the tobacco company Philip Morris International rounded out the top five contributors to RAGA.

RAGA distributed close to $3 million to four campaigns in the last half of 2021.

Last fall it backed Jason Miyares as Virginia’s AG with a whopping $2.6 million, ensuring his victory over Democratic incumbent Attorney General Mark Herring in an extremely close race. The support from RAGA accounted for the “lion’s share of donations received” by the Miyares campaign, The New Republic reported.

RAGA also made a $250,000 contribution to the campaign of Texas Attorney General Ken Paxton, who has been a major proponent of the Big Lie and spoke alongside Trump at the January 6 rally preceding the violent insurrection at the Capitol. This year Paxton is facing his most contentious reelection bid ever, with Land Commissioner George P. Bush, former Texas Supreme Court Justice Eva Guzman, and U.S. Rep. Louie Gohmert all running to remove him from office.

Editor’s note: This piece incorrectly stated that RAGA’s revenue was down from $9.5 million raised in the second half of 2019. This was incorrect and has been updated.