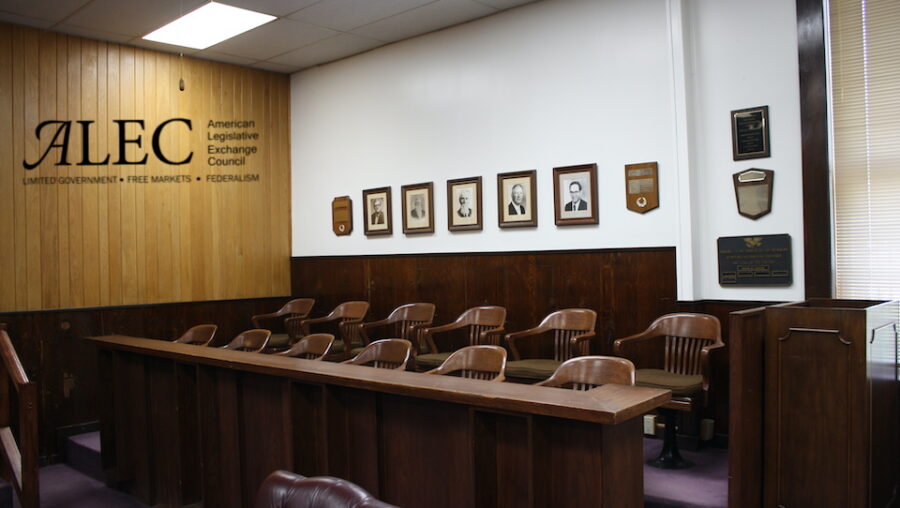 Image adapted from photo by Brandonrush

The American Legislative Exchange Council (ALEC) is promoting a new bill designed to limit awards by juries in injury lawsuits.

Funded primarily by corporate members and private foundations, ALEC is a pay-to-play operation where lobbyists and state legislators meet in secret and vote as equals on “model bills” that often limit fundamental rights and benefit the bottom line for corporations at the expense of the public.

The Anchors Away Act, amended from an earlier version and adopted by ALEC on Dec. 16, 2021, would prevent injury attorneys from asking jurors for specific amounts or ranges of amounts of noneconomic damages, such as pain and suffering.

ALEC’s justification for the change is that “juries will often be significantly and substantially influenced by a figure suggested by plaintiffs’ counsel and use that number as a base, or ‘anchor,’ for determining the amount of noneconomic damages to award.”

ALEC has a history of turning out model legislation that makes it more difficult for people to sue for damages due to unsafe products or workplaces.

In 2018 it pushed for a model bill that would force people exposed to asbestos to search out bankrupt companies involved in asbestos, not just those still in business. However, many companies that made or sold asbestos products have sought bankruptcy protection and are now held in trusts, which are more difficult to sue and have assets that are harder to determine. Often, the plaintiff with asbestosis dies before a settlement is reached.

In 2020. ALEC released its Safe to Work Act, which would make any employee or customer who believes they were infected by Covid-19 at a specific workplace or business account for all other contacts they had with places or people for two weeks prior to diagnosis. In addition, the defendant would need to meet a heightened burden of proof in claiming that the business made a “conscious, voluntary act or omission in reckless disregard” of government public health requirements or guidelines.

Jury members usually find that determining economic damages from injuries is relatively straightforward, since amounts can often be based on lost wages or medical bills, for example. By contrast, the task of fairly assessing noneconomic damages is more subjective, so juries generally find it more challenging to calculate awards for claims for “pain and suffering.” In cases of wrongful death, jurors need to take into account the plaintiff’s loss of the decedent’s love, companionship, comfort, care, assistance, protection, affection, society, moral support, and so forth.

Noneconomic damages do not include punitive damages, which are typically awarded when the defendant’s behavior is found to be especially or knowingly egregious.

Many ALEC corporations have paid out large awards for unsafe workplaces, accidents, or unsafe products. For example, UPS, Fed-Ex, Raytheon, Duke Energy, and Sanofi (a pharmaceutical company) are all ALEC members as well as regular defendants in injury lawsuits.

Jurors often receive no specific guidance on how to decide noneconomic damages for claims for pain and suffering. In California, for example, jury instructions on noneconomic damages state, “No fixed standard exists for deciding the amount of these damages. You must use your judgment to decide on a reasonable amount based on the evidence and your common sense.”

This makes the entire process of determining noneconomic losses very complicated for juries. Illinois and other state legislatures have delineated several categories of damages that, like pain and suffering, cannot be readily calculated in monetary terms. Instead, compensation for these other categories of injury requires human judgment to translate the harm caused into an award for damages.

“Juries need guidance, and the attorney has the experience to help the jury [place a value on] noneconomic losses,” said John Seligman, a plaintiff’s lawyer in Miami, where attorneys can suggest award amounts to juries. “That’s what lawyers do. The jury can accept or reject the suggested amount or range.”

Since judges can reduce award amounts, there are other built-in safeguards for defendants, including the right to appeal. One study found that the reversal rate in private civil cases in all federal appellate courts is 12%. These reversal rates are modestly higher if partial reversals are included.