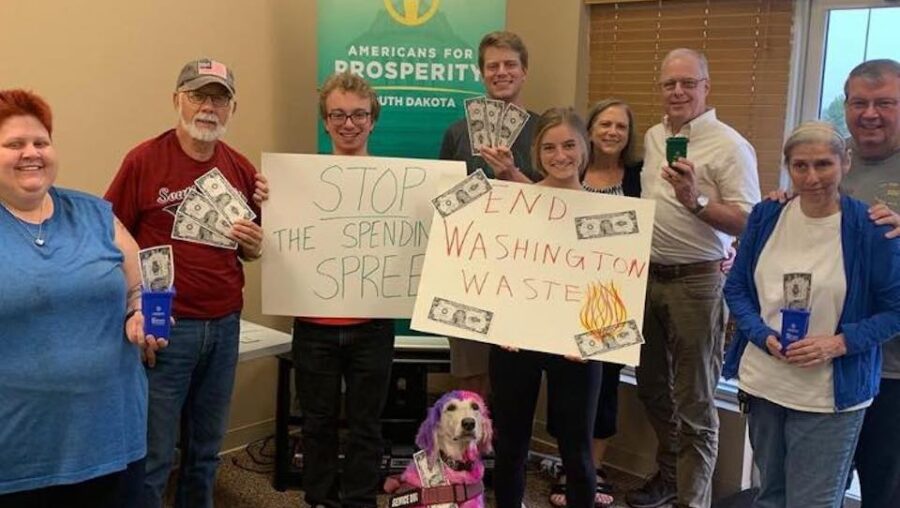 Charles Koch’s right-wing advocacy group Americans for Prosperity continues its crusade against Medicaid expansion, this time fighting against a South Dakota ballot initiative that would offer healthcare coverage to residents of the state who earn less than $18,000 a year.

Stopping Medicaid expansion is a high priority of the Koch group, which claims three million members and, through its super PAC Americans for Prosperity Action, targets Democrats in key swing congressional races.

With affiliates in 38 states, Americans for Prosperity (AFP) is Koch’s premier astroturf operation, activating people to oppose public-sector unions, expanded healthcare, and environmental standards. Its budget, heavily supported by the Koch-funded Stand Together Chamber of Commerce, was $78 million in 2020.

Dozens of groups have endorsed the South Dakota ballot measure to expand Medicaid and formed a coalition called South Dakotans Decide Healthcare. It includes groups representing doctors, nurses, teachers, and farmers, along with many local healthcare providers and national organizations such as the AARP, the American Heart Association and the American Lung Association, among others.

Since the Affordable Care Act (ACA) was implemented in 2014, only 12 states have failed to allow for an expansion of Medicaid by raising the income limit for eligibility. If South Dakota passes the ballot measure this year, it will qualify for 90% federal matching funds available under the ACA, and the American Rescue Plan Act will provide an additional 5% increase in the federal matching rate for two years after the expansion takes effect.

The governor and AFP want to make the issue about taxes because Medicaid expansion is popular among voters of both parties. A recent AARP poll of 1,000 South Dakota voters over age 50 found that almost two-thirds say they are “extremely or very likely” to vote to expand Medicaid coverage to their fellow residents.

Faced with that reality, Republican legislators placed a measure on the June primary ballot, Amendment C, that would revise the state Constitution to require a three-fifths vote to adopt constitutional amendments.

The latest campaign finance disclosures show that AFP had already spent more than $339,000 on canvassing, direct mail, and digital ads for the June measure through the ballot committee South Dakotans Against Higher Taxes by the end of 2021.

In 2018, AFP teamed up with a coalition using the same name that took $6.5 million in tobacco industry money to kill a ballot measure that would have increased tobacco taxes.

AFP has also posted an online petition against the Medicaid ballot measure, claiming that Medicaid expansion “dramatically increases the size of government” and leads to higher taxes. The local chapter is also using social media to organize opposition, and ads pushing the June end-run link to AFP’s website. 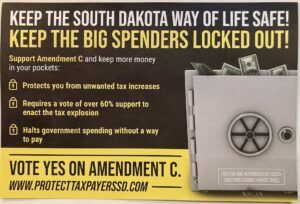 If the measure passes, expanding Medicaid is expected to provide healthcare coverage to an additional 42,000 low-income residents of South Dakota. In the 38 other states that have allowed for it, Medicaid expansion has improved health and well-being significantly, according to numerous studies, leading to lower mortality rates, better management of chronic diseases, and better outcomes in sexual, reproductive, and behavioral health. The program also helps providers avoid the cost of uncompensated care.

South Dakota’s nonpartisan Legislative Research Council concluded that the measure would draw down more than $300 million annually in federal aid at a cost to the state of up to $20.8 million per year. The state ran an $86-million surplus last fiscal year and has $301 million in reserves.

With the federal government picking up virtually the entire tab and the state having substantial reserves, even some legislators who previously opposed expansion have changed their minds. Nonetheless, AFP is attempting to appeal to voters by claiming the concern is about taxes.

When Missouri residents voted in favor of Medicaid expansion in 2020 – a measure that makes an additional 205,000 uninsured adults eligible for healthcare coverage – AFP attempted to get the GOP-led legislature to deny funding for the expansion. This effort was ultimately rejected by Missouri courts, allowing the state to begin enrolling new applicants for its expanded Medicaid program in October 2021.

Missouri residents who earn up to 138% of the federal poverty level ($26,500 for a family of four) are now covered, whereas the previous law only provided benefits to those at or below the poverty line. Since enrollment opened last fall at the height of the Delta surge, only 53,000 adults have signed up. But once the Omicron wave subsides, state public health agencies hope to increase their outreach efforts and help more low-income residents benefit from the cost-effective coverage Medicaid affords.