› Featured Investigations › How Far Right Will the AG Race in Wisconsin Go? 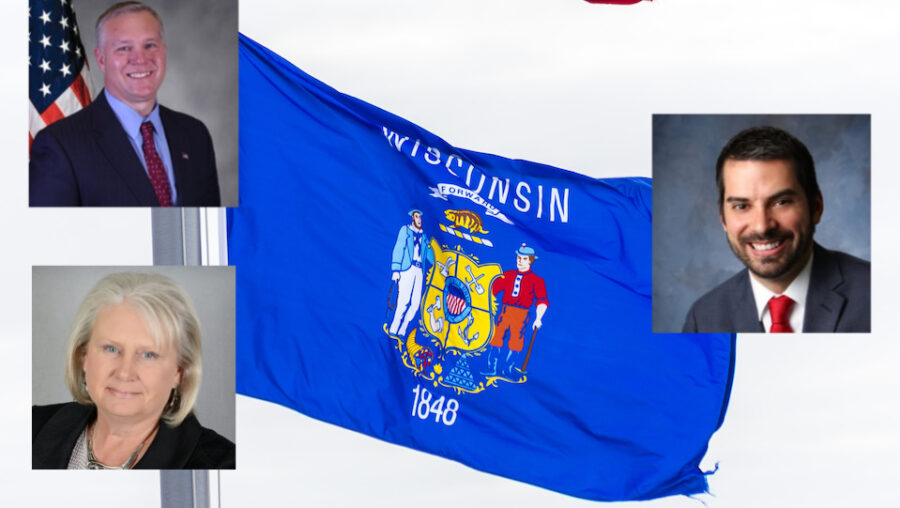 Despite having no prosecutorial experience, a former rightwing state legislator has raised more campaign cash than both a county district attorney and a private practice lawyer competing in the Wisconsin Republican primary for attorney general.

After unofficially entering the race in November 2021, Jarchow loaned himself just over $10,000 and since announcing his bid on Jan. 19, says that he has raised $200,000. State records show that Toney has only raised $84,366 since entering the race in April 2021. Mueller just announced on Mar. 19 and has yet not reported any campaign finance numbers.

Jarchow, a private attorney who represented a largely rural district in northwestern Wisconsin from 2015–19, has attacked Toney in digital ads for prosecuting 10 businesses in Fond Du Lac County that failed to enforce the extension of a Covid mask mandate issued by Governor Tony Evers (D). The mandate was sharply criticized by GOP lawmakers, and once the Wisconsin Supreme Court ruled the extension illegal because it hadn’t been approved by the legislature, Toney dropped the charges.

As an assemblyman, Jarchow introduced legislation popular among conservatives, including such measures as protecting landowners’ shoreline rights, allowing for less restrictive hunting laws, and repealing the state’s personal property tax. Democrats are concerned that the Republican candidates would again use the office to champion rightwing causes and challenge federal legislation, as did former Attorney General Brad Schimel, a Republican who lost to Kaul in 2018.

Schimel used the office to move in lockstep with the Republican Attorneys General Association (RAGA) in challenging Obama-era federal legislation and regulations—including the Affordable Care Act—and defending Republicans’ extreme gerrymandering of the state. RAGA and its policy arm, the Rule of Law Defense Fund, fully embraced Trumpism and are forever tied to the Jan. 6 insurrection at the U.S. Capitol. RAGA has not yet endorsed a GOP candidate in this year’s Wisconsin primary.

While Trump hasn’t made an endorsement yet either, Jarchow is attempting to align himself with the former president, going as far as to delete earlier tweets in which he called Trump “dumb and insane” and lacking in “actual political skills.” Now that he’s running for AG, however, he “describes himself as ‘just like Donald Trump’… on his campaign website,” WisPolitics.com reports.

In a blunt tweet, Jarchow also called Attorney General Kaul “an epic failure” and urged him to “take off his partisan blinders and investigate allegations of election fraud/lawbreaking” in the 2020 election, despite numerous reviews that have found no evidence of fraud.

In 2018 when Jarchow ran for state senate, Charles Koch’s astroturf operation Americans for Prosperity (AFP)–Wisconsin endorsed him. “Representative Jarchow has been a true champion for the principles and policies AFP–WI activists fight for each and every day,” AFP’s State Director Eric Bott wrote at the time. Jarchow went on to lose that race, and AFP has yet to endorse any candidate in the Wisconsin GOP primary for AG.

Jarchow’s association with the rightwing blog Empower Wisconsin could give him considerable name recognition among conservatives in the state. He had been president of the organization before announcing his candidacy in January.

Eric O’Keefe, a GOP fundraiser and rightwing political operative with deep ties to the Koch brothers, has replaced Jarchow as president of Empower Wisconsin, where he originally served as director. He is also a board member of the Wisconsin Club for Growth (WCFG), one of the leading political spenders in the state and an organization the Center for Media and Democracy (CMD) has called out for lying to the IRS about its political activity, which violates its tax-exempt status.

Jarchow’s ties to both the Koch political network and WCFG could prove advantageous.

Toney Builds on His Prosecutorial Record

Toney, who does not mention Trump on his website, has been a county prosecutor since 2012 and touts his experience prosecuting drug crimes, gangs, and sex offenders as making him the best candidate for attorney general. Jarchow has no prosecutorial experience.

Toney doesn’t share Jarchow’s ties to rightwing groups and is gaining a growing number of endorsements across the state from sheriffs, judges, and other county prosecutors, along with the Wisconsin Fraternal Order of Police.

Toney has made an issue of the fact that the Wisconsin Professional Police Association gave Jarchow its second-lowest rating in 2018. In response, Jarchow has rolled out a “Back the Badge” campaign touting his pro-police legislative record.

Mueller announced her late entry into the race for Republican AG in order to investigate six hospitals for refusing to administer Ivermectin to Covid patients. She provided no details on the hospitals or patients, but said that families reached out to her “begging for help, trying to figure out what to do because their loved ones were in hospitals and the families believed that those loved ones were basically being murdered. And they had the drugs withheld from them.”

A study published on Mar. 30 found that treating patients with Ivermectin did not result in a lower hospitalization rate. Both the Centers for Disease Control and Prevention (CDC) and the Food and Drug Administration (FDA) strongly warn against using Ivermectin to treat Covid-19.

In addition, during the pandemic Mueller’s firm, the Amos Center for Justice and Liberty, has been focused on issues such as vaccine mandates and mask requirements in schools. In November 2020, she also sued but failed to overturn the results of the presidential election in Wisconsin, and has been supportive of efforts to decertify the vote.

Kaul has come under fire from Republicans for “defunding the police”—a charge he refutes—and being both soft on crime and too slow to analyze forensic evidence. As head of the state’s Department of Justice, he has focused on public safety and curtailing gun violence; combating the opioid epidemic and the increasing use of meth in the state; fighting for clean and safe drinking water and other environmental safeguards; and protecting voting rights, among other issues.

The issue of abortion presents a sharp contrast between the incumbent AG and the Republican candidates. In a recent Q&A session with Wispolitics.com, Kaul said that “Jarchow and Toney appear to be competing with each other to get as far right as possible” and that “they see the office in political terms, asserting they want to prosecute women who get abortions if the U.S. Supreme Court overturns the Roe v. Wade decision,” according to Wisconsin Public Radio.

Unlike his Republican predecessor, Kaul has also prioritized the prosecution of companies responsible for toxic chemicals in the environment, recently suing Johnson Controls and Tyco Fire Products for PFAS contamination. In 2015 Schimel joined other GOP attorneys general in filing suit against the U.S. Environmental Protection Agency (EPA) to prevent regulation of carbon emissions to control greenhouse gasses. In 2018 he also filed an amicus brief in a suit to stop Democratic attorneys general from New York and Massachusetts, who sued oil giant ExxonMobil for defrauding shareholders by misrepresenting the risks of climate change regulation.

None of the candidates in this year’s GOP primary has mentioned anything about climate change or the need to enforce environmental regulations in their campaign literature.

At the end of 2021, Kaul’s campaign had $1 million in cash on hand after a record-breaking fundraising period, with totals “well above previous AG campaigns at a comparable point in the race,” according to Wispolitics.com.