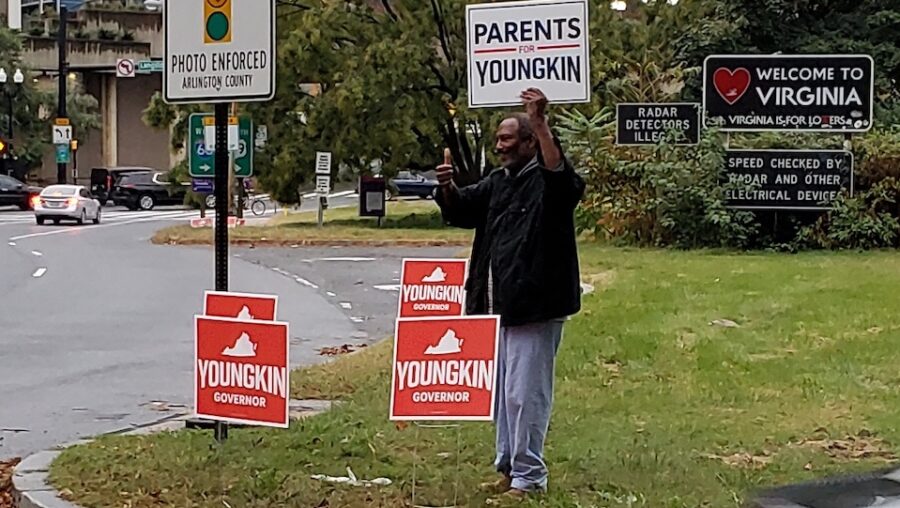 At the February meeting of the Council for National Policy (CNP), Christian Right activists and donors got a gloating tutorial in astroturfing from rightwing operatives in Virginia who helped Republicans make big political gains there in the 2021 election.

Despite the fact that CNP is registered as a 501(c)(3) nonpartisan organization with the Internal Revenue Service, the presenters were overtly partisan in promoting a political strategy Republicans won with in the commonwealth state and intend to replicate in hopes of winning across the country in this year’s midterm elections.

The Center for Media and Democracy (CMD) obtained an audio recording of the presentation titled, “Virginia 2021: Lessons Learned,” led by Chad Connelly, CNP Executive Committee member and founder and president of Faith Wins. “There’s no question in my mind the left has overplayed their hand so badly that people who are maybe not on our side have come out of the woodwork,” he told the group. Democrats are “terrified if we get churches involved,” he added, pointing out that in the 2021 Virginia election 312 churches registered 77,000 new evangelical voters in the state. Tactics like this make the left “scared to death,” he said.

When CMD first revealed the full agenda of the CNP meeting—held from Feb. 24–26 at the posh Ritz-Carlton in Dana Point, California—along with this year’s changes in leadership for the Christian right “shadow network,” that agenda did not indicate that Jackson or Davison would be presenting. Instead, it listed Youngkin for Governor Campaign Manager Mark Campbell and WPA Intelligence CEO Chris Wilson as scheduled speakers.

Immediately following the Virgina session, CNP held an “Action Session” called “From Virginia to the Mid-Terms” to “chart the course to success nationwide in November.” As a tax-exempt organization, CNP is prohibited by federal law from engaging in political activity, including expressing support for a political party.

Cobb emphasized that while the parent versus school board conflicts in Virginia that garnered national attention (such as in Loudoun County) appeared “organic,” they were actually a direct response to “a bunch of liberal-controlled legislators” in the Virginia General Assembly who passed bills related to “cultural competency training” for teachers and transgender-inclusive policies for students. “Understanding the actual situation is important to our movement as we look at the midterms,” she said.

After efforts failed to keep these bills from passing, Cobb’s team developed a plan to prevent school boards from implementing the statewide trans-inclusive policies. Through the misnamed “Protect Every Kid” campaign, Cobb says her group pushed to:

As Cobb’s group targeted selected counties, hundreds of parents showed up at school board meetings in these locales to testify against the new policies. “In many [of these counties], we helped them to create media events,” she added.

Cobb emphasized that the work put into school board fights translated to wins for Republicans at the polls. “We won some and we lost some, but even in places we lost, like Loudoun County, we were subtly building a voting block that could not be reckoned with when it got to November,” she said. She pointed to Russell and Dickenson counties as places where thousands more people turned out to vote than four years earlier, with Republicans accounting for “100%” of the new voters.

Reports from True North Research and The Intercept exposed rightwing groups such as the Independent Women’s Forum (IWF) and its sister organization, Independent Women’s Voice (IWV), as also integral to the astroturfed protests at school board meetings in Virginia. Heather Higgins, IWF’s chairman and IWV’s CEO, is a Gold Circle member of CNP. (Lisa Graves, executive director of True North Research, is CMD’s board president.)

Flip Black Voters (or Convince Them to Stay Home)

While Cobb focused on the strategy of appealing to parents, Jackson spoke about the importance of getting minority communities—specifically Black residents—to vote Republican or not at all. This proved successful in Virginia in 2021 and could be replicated nationwide this year.

As head of S.T.A.N.D.’s 501(c)(3) and 501(c)(4) nonprofits, along with its PAC, Jackson said that his groups “invested heavily in the Black precincts” in Virginia to tip the scales for Republicans. The organizations “spent tens of thousands of dollars” advertising “on Black and urban radio stations” in and around Norfolk, Richmond and northern Virginia. “We were the only ones trying to reach those communities and [give] them a reason not to vote for these Democrats,” he said. They were “trying to give Black voters a reason to do one of two things: either as a matter of conscience not vote Democrat or to realize, ‘Wait a minute, these Republicans have something to say. Let’s give them a shot.'” He claims that the Emporia and Hampton districts went Republican due to his group’s efforts.

Given their “common worldview,” Jackson argued that CNP activists and donors should invest in efforts to mobilize the Black community for Republicans across the country, just as his groups did in Virginia. He defined that “worldview” as anti-abortion, against same-sex marriage, and in favor of “vigorous law enforcement to protect people… to protect babies.”

What Jackson didn’t mention is that his own “worldview” includes hatred for the LGBTQ community and the Black Lives Matter movement. In April 2021, he said on The Awakening radio show that Black Lives Matter is “worse than Covid” and that “it could take a generation to undo the damage they are doing.” In May 2019, he expressed the extreme view that gay people “can’t really be parents, not in the normal sense.” He also once called Barack Obama, America’s first Black president, “the godfather of the LGBTQ mafia.”

Ever outspoken, the minister-activist kept the CNP crowd entertained. “Never underestimate the power of prayer,” Jackson said at one point in his presentation, “because look, it had to be prayer that caused [Democratic gubernatorial candidate] Terry McCauliffe to be so stupid.” Once the laughter died down, he added: “Let us pray that Democrats all over this country will continue to be as stupid…”