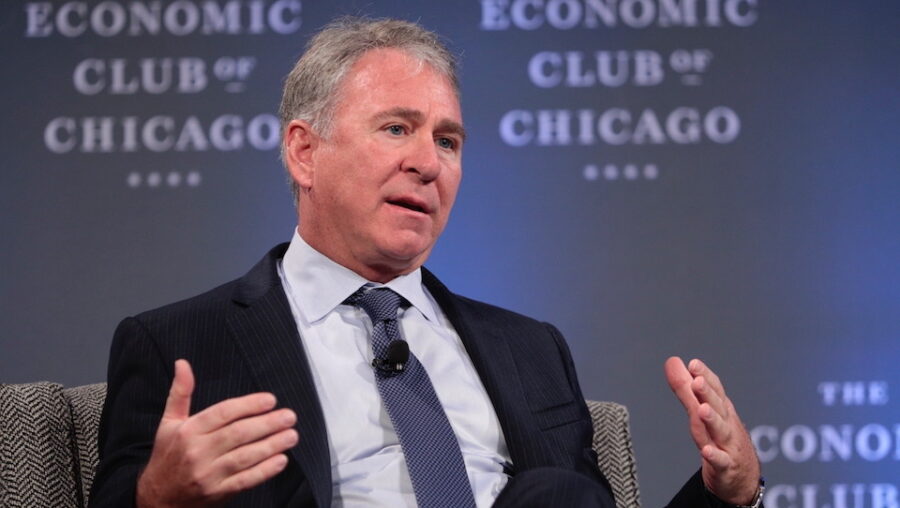 After recently contributing a record-breaking total of $45 million to a candidate running for governor of Illinois, Chicago-based hedge fund billionaire Ken Griffin has become the largest GOP megadonor in the country for combined federal and state campaigns this election cycle.

For the previous three election cycles—2015 through 2020—the largest GOP donor had been Sheldon Adelson, a casino owner who, with his wife, Miriam, gave a total of $413 million to Republican federal candidates, party committees, and other super PACs. But in the wake of Adelson’s death in January 2021, his wife has yet to make major political contributions to this year’s campaigns.

Since the beginning of the current election cycle in January 2021, Griffin has already contributed more than $94.6 million to Republican candidates and committees at the federal and state level. As the founder and CEO of Citadel, he is the wealthiest person in Illinois—with a fortune worth $25.8 billion, according to Forbes.

So far this election cycle, Griffin has given $42.3 million to Republican candidates and committees at the national level and $52.3 million to state candidates and political committees in Illinois. The largest chunk of his spending locally—$45 million—has gone to Richard Irvin, the mayor of Aurora, Illinois who is vying against four other candidates to win the Republican primary on June 28. Except for wealthy politicians who bankroll their own campaigns, this is the largest amount ever given by a single donor to a U.S. candidate at any level.

One reason Griffin is standing out as the largest state-level contributor in the country is because of a law in Illinois that removes limits on campaign contributions when a wealthy candidate spends heavily with their own money—a law intended to level the playing field. However, given the preponderance of billionaires and near-billionaires funding their own campaigns in the state, the law is instead allowing ever-escalating amounts of money to influence political races in Illinois.

If his lead in the polls holds, Irvin would face the incumbent, Gov. J.B. Pritzker (D), the billionaire heir to the Hyatt Hotel fortune who is largely self-funding his own campaign again after doing so in 2018. In that race for governor, Republican incumbent Bruce Rauner, owner of a private equity firm, spent more than $95 million of his own money, but lost against Pritzker, who personally spent $171 million. This round Pritzker has already invested $90 million in his reelection bid, according to the Chicago Sun-Times.

Of the $55 million Griffin has given to federal races this election cycle, $17.5 million went to the House GOP fund and $5 million to the Senate GOP fund. He gave another $1.75 million to American Patriots, a new super PAC that supports the election of Republican military veterans to the U.S. House and has endorsed five veterans.

The single largest megadonor in the country this election cycle remains Democratic investor George Soros who, in addition to making  other contributions totaling $1.8 million, gave $125 million to Democracy PAC II, which he founded.