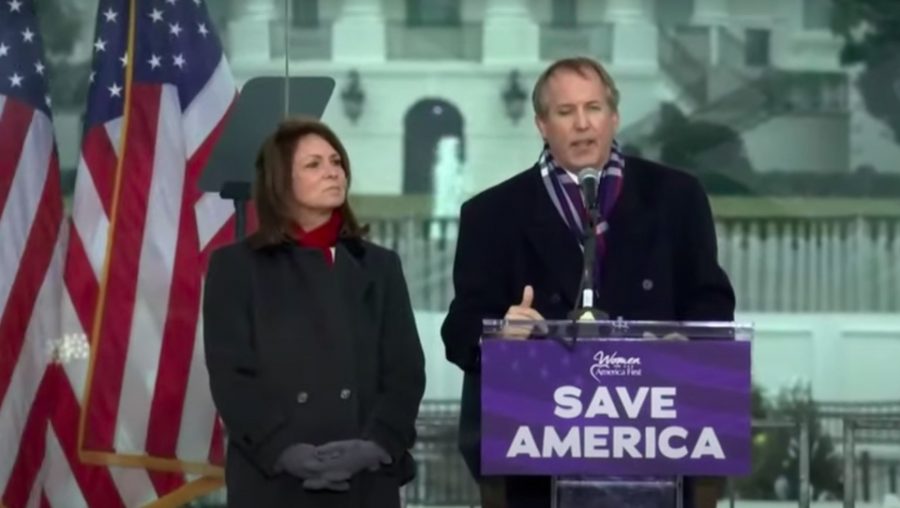 Image created from video of January 6, 2021 "March to Save America" rally uploaded to YouTube.

Results from Tuesday’s primaries and runoffs make clear that MAGA candidates for state attorney general are still popular among Republican voters—even if not every Trump-backed candidate came out on top.

In Texas, incumbent Attorney General Ken Paxton (R) beat Land Commissioner George P. Bush (R) by a larger than expected margin, with a 36-point lead (68–32%). The special runoff election was held after no candidate received over 50 percent of the vote in the March 1 primary.

Paxton rode to victory on his endorsement from Trump, who called him “the most effective attorney general and… just a great guy.”

Thank you, President Trump, for your unwavering support.

Join my fight to defend our state & our conservative values from the radical Left & cast your vote for #KenPaxton for AG! pic.twitter.com/EmkXpnbRI9

Bush had also courted Trump’s endorsement, but faced an uphill battle given that Paxton had stood steadfast with the former president through his claims of widespread voter fraud in the 2020 election and his many efforts to “Stop the Steal.”

In December 2020, Paxton led a last-ditch legal effort to overturn the election results in several swing states and nullify more than 10 million votes. Michael P. Farris, president, CEO, and general counsel at the Christian Right litigation outfit Alliance Defending Freedom, had pitched the lawsuit to attorneys general in Louisiana and South Carolina, but only Paxton was willing to take the lead. He persuaded 17 other Republican AGs to sign on to the lawsuit and more than 100 Republican House members filed an amicus brief in the case, but the U.S. Supreme Court summarily rejected it.

On Wednesday, the day after he won his primary election, the Texas state bar association filed a lawsuit against Paxton for professional misconduct for making “dishonest” claims about election fraud as the basis for that case.

A co-chair for Lawyers for Trump, Paxton spoke at the March to Save America rally preceding the violent insurrection at the U.S. Capitol on Jan. 6, 2021, where he told MAGA nation, “We will not quit fighting.”

Paxton is also deeply involved in the Republican Attorneys General Association (RAGA), which actively participated in the March to Save America coalition. Its dark money sister organization, the Rule of Law Defense Fund (RLDF), ran robocalls in the weeks leading up to the insurrection urging protesters to march on the Capitol.

Paxton is currently under FBI investigation for abuse of office, and even though he has been indicted on felony securities fraud charges for a whopping seven years, he has yet to stand trial.

In the November general election, he will face off against two other candidates for AG: Rochelle Garza (D) and Mark Ash (L).

Although Trump didn’t make an endorsement in the race, Marshall has fully embraced the Big Lie and as recently as March, when he refused to acknowledge that Biden is the duly elected, legal president of the U.S. when asked by Sen. Sheldon Whitehouse (D-R.I.) during a Senate hearing.

Also an active RAGA member, Marshall was in charge at RLDF when the robocalls went out urging protesters to march on the Capitol as Congress was certifying the Electoral College votes. He also joined Paxton’s lawsuit seeking to overturn the election results and participated in a White House meeting on December 10, 2020, to strategize about further avenues for challenging the outcome of the presidential election.

“We still believe that President Trump will have an opportunity to be able to come back for another four years and want to discuss ways that we can be supportive of this administration,” Marshall told Fox and Friends in December 2020 before heading to the White House for the meeting.

Marshall is now running for reelection in one of the reddest states in the country against Wendell Major (D), a lawyer and the first Black police chief of the city of Tarrant, near Birmingham.

With Attorney General Leslie Rutledge (R) term-limited out of office this year, voters in Arkansas chose Lt. Gov. Tim Griffin to run on the Republican ticket. He beat his primary challenger, Leon Jones, by another decisive margin: 85–15%.

In addition to Trump’s endorsement, Griffin also has the support of Leonard Leo, the right-wing “judge whisperer” who is credited with moving both the Supreme Court and the country’s federal courts to the far right in recent years.

Invitations for Griffin fundraisers obtained by the Center for Media and Democracy list Leo as a host for events on Jan. 19 and March 30 that featured U.S. senators, representatives, and Republican attorneys general.

In November, Griffin will face Jesse Gibson, a native of the state who runs his own law firm in Little Rock and ran unopposed in the Democratic primary.

Though Trump did not endorse any candidates for AG in Idaho, former Idaho Congressman Raúl Labrador (R) defeated incumbent Attorney General Lawrence Wasden (R) on May 17 by a margin of 52–38%. Arthur Macomber placed third with 11% of the vote.

Wasden, one of the longest serving state AGs in the country, faced criticism from the MAGA wing for not backing Trump’s Big Lie that the 2020 election was stolen.

Wasden declined to join Paxton’s lawsuit seeking to overturn the 2020 presidential election and had instructed his staff in Idaho not to participate in RLDF activities until he viewed the results of the organization’s internal inquiry into its role in the Jan. 6 insurrection.

Wasden was targeted for defeat by the extremist Idaho Freedom Foundation, an affiliate of the State Policy Network, and the Club for Growth, largely funded by right-wing megadonor Richard Uihlein, which spent $300,000 on ads attacking Wasden for his refusal to jump on Trump’s election fraud bandwagon.

Labrador is running against Boise-based lawyer Steven Scanlin (D) in a state that hasn’t elected a Democratic attorney general since 1995.

Outliers in Georgia and Nebraska

“Chris Carr was a disaster every step of the way,” Trump said in a statement endorsing Gordon. “He wasn’t looking for election integrity, but rather an easy way out.” Even though Gordon had continued to push Trump’s Big Lie of widespread voter fraud and promised voters to open an investigation into the 2020 election, they didn’t seem to care.

Carr, who claimed that he had no knowledge of RLDF’s robocalls, stepped down as chairman of RAGA in April 2021 citing a “significant difference of opinion.” He also backed away from supporting Paxton’s effort to overturn the election results through the courts.

Carr will face off against Democratic nominee Jen Jordan in the fall in what is expected to be a close race.

In Nebraska, Lincoln attorney Mike Hilgers won the Republican primary for attorney general on May 10 without Trump’s endorsement of any candidate or any alignment with MAGA. And in a refreshing twist, Hilgers isn’t running against a Democrat in November. Instead, his opponent is Larry Bolinger of the Legal Marijuana NOW Party, which has been active in the state since 2016.