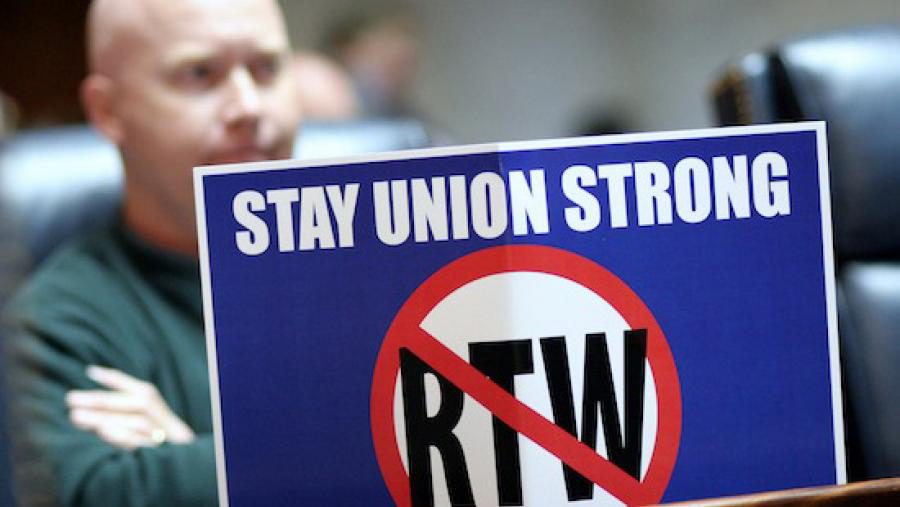 An Illinois Circuit Court judge has rejected the efforts of the right-wing Liberty Justice Center to prevent voters from having their say on a constitutional amendment to protect workers’ rights in November.

The Liberty Justice Center, a litigation center spawned by the far-right Illinois Policy Institute, says it will appeal the ruling.

The ballot measure, which requires 60% of the vote to pass, seeks to have Illinois join a handful of states that guarantee the right to collective bargaining as part of its constitution. If successful, it would prevent future state general assemblies from passing anti-union “right-to-work” legislation without going back to the voters.

The Illinois General Assembly passed the proposed amendment, which will appear on the ballot as Amendment 1, in May 2021. If approved in November, it would establish a constitutional right for employees in Illinois to organize and bargain collectively through representatives of their choice to negotiate “wages, hours, and working conditions and to protect their economic welfare and safety at work.”

Illinois State Senator Ram Villivalam (D), who authored the measure, told the Center for Media and Democracy (CMD) that, “During the pandemic, thousands of Illinois frontline workers showed their willingness to work for the community. Passing the referendum is a way, in turn, for the communities to show workers their support.”

The measure would also explicitly bar state and local governments from adopting so-called “right-to-work” laws or ordinances. Right-to-work laws prevent unions from negotiating agreements that require all employees in a unionized workplace to contribute to the cost of union representation.

Those laws, currently in effect in 27 states, undermine unions by creating a “free rider” problem where non-union employees don’t pay dues yet benefit from the favorable wages and working conditions the union negotiates. Major corporate lobbying groups such as the National Right to Work Committee, the U.S. Chamber of Commerce, the American Legislative Exchange Council (ALEC) and its local offshoot the American City County Exchange (ACCE) have been pushing these policies across the country for decades.

On April 21, the Liberty Justice Center and the Illinois Policy Institute filed a legal challenge to the proposed ballot measure in state court, claiming that the federal National Labor Relations Act (NLRA) preempts any state laws that regulate collective bargaining. “The state cannot adopt a measure that conflicts with federal law,” the groups contend, and therefore “cannot use taxpayer funds” to place the question on the ballot.

Seventh Judicial Circuit Judge Raylene DeWitte Grischow disagreed, saying there were “no reasonable grounds” for keeping the measure off the ballot. In her nine-page decision, Judge Grischow held that the Liberty Justice Center’s petition sought “an improper advisory opinion,” that some parts of the amendment were clearly not preempted, and that the legislature had properly placed the proposal on the ballot.

“The proposed Amendment would serve at least three permissible purposes,” Judge Grischow wrote. “First, it would create rights for public employees, which Petitioners concede is not preempted by the NLRA. Second, it would restrain the power of the General Assembly to pass laws restricting union security agreements, a subject left open to the states. Third, it would act as a state-law failsafe to preserve rights for private-sector employees in the event the federal government ever decided to abandon the NLRA.”

“There are no grounds for denying the voters the opportunity to decide whether to add the Workers’ Rights Amendment to the Illinois constitution,” Grischow concluded.

Several years ago, the Illinois Policy Institute and the National Right to Work Legal Defense Foundation represented the plaintiff Mark Janus in the landmark Janus v. AFSCME court case, which made its way to the U.S Supreme Court in 2017. In its ruling, the Court determined that public sector non-union members do not have to pay union “agency fees” even if they benefit from the union’s work on their behalf.

Villivalam pointed out that old and new barriers to organizing “have only exacerbated the income inequalities and wage gaps existing between diverse groups, especially the huge difference in what workers get and what management gets…. Putting collective bargaining rights into the state constitution is a way for workers, unions, and the community to move forward,” he said.

CMD examined multiple IRS filings to determine the funding sources for the groups challenging the Workers’ Rights Amendment, and found that they share the same donors backing many other political and legal fights against unions: DonorsTrust and Donors Capital Fund, the preferred donor conduits of the Koch political network; the Lynde and Harry Bradley Foundation and its Bradley Impact Fund; the Ed Uihlein Family Foundation; Searle Freedom Trust; and the State Policy Network.

The organizations are not alone in opposing Amendment 1. Even though the measure enjoyed bipartisan support when it passed in the state legislature last year, it has garnered the opposition of several business groups, including the Illinois Chamber of Commerce, the Illinois Manufacturers’ Association, and the National Federation of Independent Business, as well as the Illinois Association of School Boards.