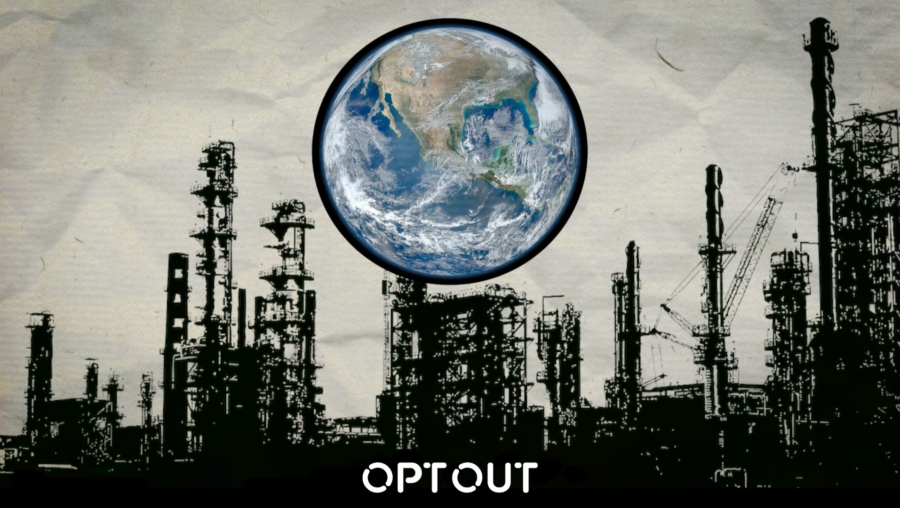 The Center for Media and Democracy is a member of the OptOut independent media network, which coordinated this article. Reporting by Amy Westervelt (Drilled). Video production and editing by Spencer Snyder.

Who’s to blame for a lack of action on climate change? 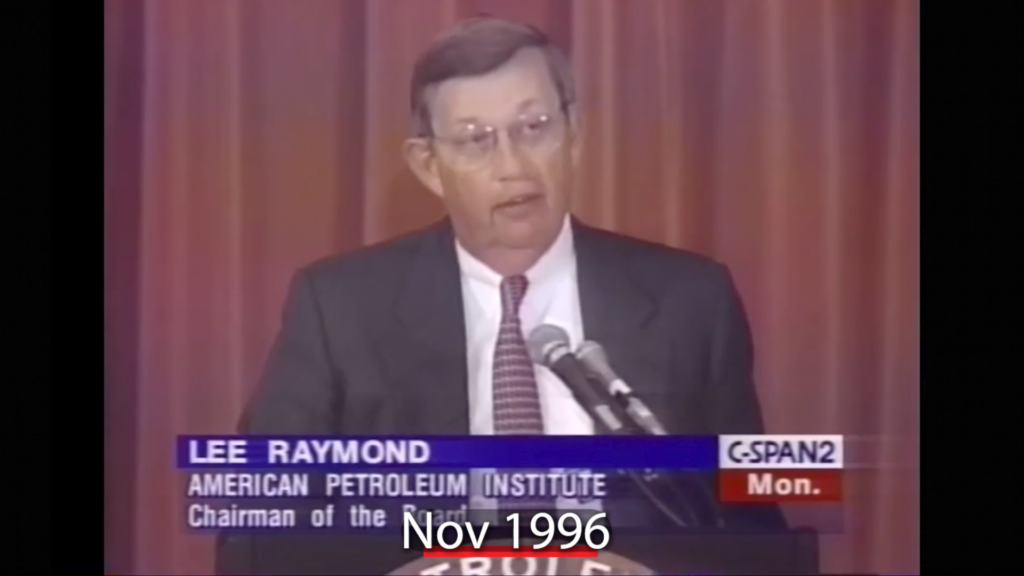 The oil companies, most obviously; 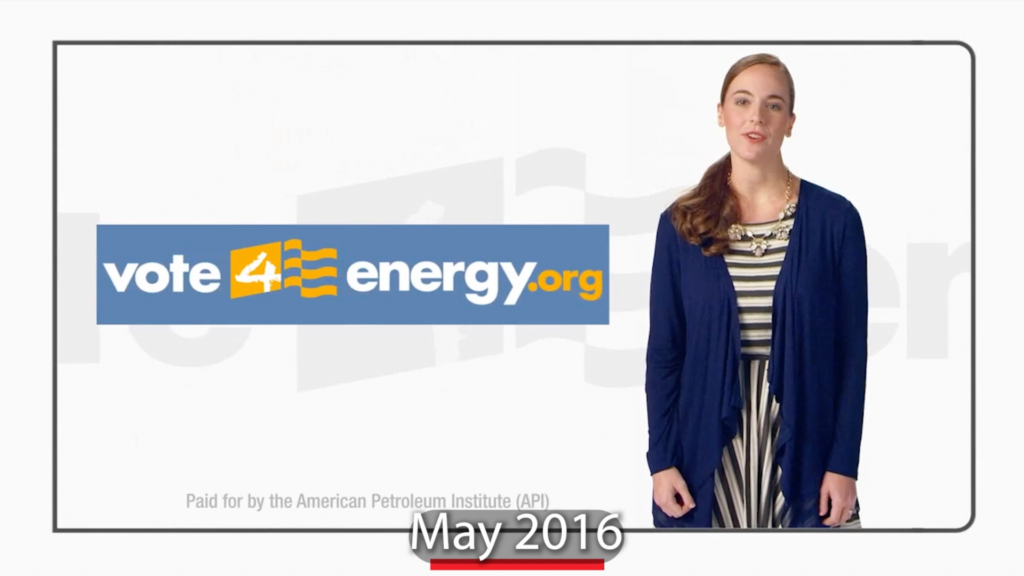 “Energy! Environment! Some say it’s either/or… I don’t buy it.” 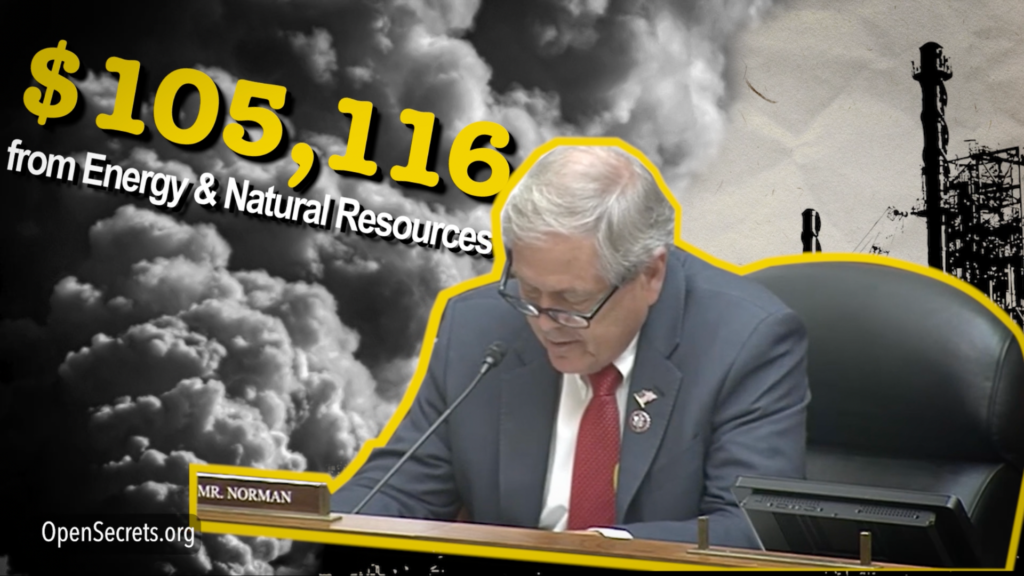 “Members…need to start focusing on the issues that are impacting everyday Americans, and the consequences of an overly ambitious and unrealistic climate agenda.”

Politicians who carry water for the fossil fuel industry.

These are all easy to blame.

Even now, when scientists say we’ve done irreversible damage to our planet, these and other media giants won’t give up the fossil fuel dollars.

When Mobil Oil and the Times teamed up to create the advertorial in the 1970s, their spin doctors admitted freely that the goal of the partnership was to “influence the influencers.” In fact, part of the original legal push for corporate personhood in the U.S. stems from those early Mobil campaigns.

Mobil invented what it called “issue advertising” or “advocacy advertising” in the late 1960s and early 1970s to deal with image problems not dissimilar to those they’re facing today—gas prices were high, profits were even higher, and an oil tanker had just dumped a large amount of oil on the lovely beaches of Santa Barbara, California. Access to trusted outlets such as The New York Times and the Los Angeles Times—which worked with Mobil to publish content that helped the company establish a friendly, responsible reputation—went a long way toward painting Mobil as a corporate “good guy.”

But in 1973, something unusual happened. Mobil’s PR department created TV versions of its print advertorials, and two commercial stations—CBS and ABC—declined to run them, explaining that the spots were propaganda, and that running them would be unethical and might even violate FCC regulations. Mobil execs saw this as the potential end of a strategy that had helped them win over not only the public, but also journalists and policymakers. The company launched a major offensive, placing op-eds in all the big papers, and sending flacks onto every TV and radio show to alert the public to the urgent need to protect corporate free speech rights. Mobil helped support the precursor to Citizens United (First National Bank of Boston v Bellotti), and fought hard for their right to continue using the media as their personal corporate PR machine.

They won, as you might have guessed, and oil companies today are making the same “corporate free speech” arguments to defend their right to mislead the public on climate change.

While there’s some momentum now toward accountability for the oil company polluters and their friends in corporate media, most legacy outlets are still taking the industry’s bait. The Post is still running pay-for-play op-eds from the American Petroleum Institute, which API spokespeople amplify as though they’re real articles, not just ads by another name. And when Russia began to invade Ukraine, American Petroleum Industry president Mike Sommers and Sempra Energy CEO Dan Broulette took to social media and cable TV to set the fossil fuel-friendly narrative: we need to ban Russian gas, we need to increase U.S. oil and gas production, and Biden’s climate policies raised prices at the pump.

Only a media system addicted to fossil fuel dollars would let these dangerously destructive industries control the climate crisis narrative in order to make even more money. Now that the bill for all those long and profitable years of media complicity is coming due—when we’re faced not only with heat waves and historic floods, but also with a U.S. government that seems less prepared to deal with the problem than ever, and a Supreme Court that also seems to have consumed a steady media diet of climate delay, we may question the wisdom of trusted media institutions that chose to take the check, year after year, and ignored their responsibility to accurately inform the public when there was still time.

This breach of trust affects every subject, not just climate. Should we believe coverage of wars that’s sponsored by the weapons industry? Should we trust Covid-19 reporting funded by Big Pharma?

In this time of emergency, new publishers and organizations are springing up to create better and more trustworthy models for journalism. An expanding group of independent editors, publishers, and journalists has come together to form a network led by OptOut, a nonprofit charity that has launched a free iOS app (Android version coming soon) and a newsletter providing news, analysis, and opinion from more than 150 financially independent media outlets that aren’t cashing checks from Exxon or Chevron. We are working to change the dominant media narratives on essential issues like climate, democracy, human rights, and labor by distributing news coverage from journalists who are paid by readers and subscribers, not by corporations “newswashing” their images through mass media.

“As a network of scrappy, uncompromising media organizations, including many nonprofits and reader-funded publications, we are saying to the corporate and legacy news giants, if we don’t need to hawk fossil fuels to our audiences, you don’t have to either,” said Alex Kotch, senior investigative reporter for the Center for Media and Democracy and co-founder and executive director of the OptOut Media Foundation.

“Wake up. Do the right thing, and get fossil fuel propaganda out of our media.”

The following publications and news leaders from the OptOut network endorse this article:

The OptOut Media Foundation (EIN: 85-2348079) is a nonprofit charity with a mission to educate the public about current events and help sustain a diverse media ecosystem by promoting and assisting independent news outlets and, in doing so, advance democracy and social justice.

Maria Bustillos is a journalist, critic, and founding editor of Popula and The Brick House.

All articles by Maria Bustillos