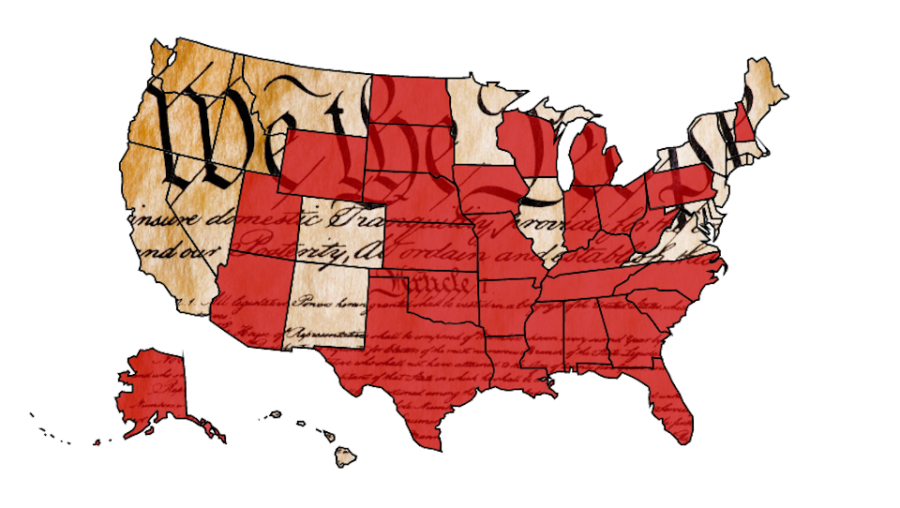 The Center for Media and Democracy released a new report today documenting how a constitutional convention would give hand-picked GOP delegates supermajority control over any proposed amendments to the U.S. Constitution.

Right-wing groups like the American Legislative Exchange Council (ALEC) and Convention of States have been ramping up their campaigns in recent years to force the first constitutional convention since 1787 as a way to sidestep Congress and radically rewrite the Constitution, often using populist rhetoric about the need for people to take back control from big government and politicians, according to a new exposé by Insider.

However, the report, “Convention of State Politicians,” takes a deep dive into the states’ delegate selection laws across the country to reach a startling conclusion: If the Right gets its way, American voters would have no role to play in a constitutional convention.

Who would decide on what amendments go out to the states? Politicians chosen by…politicians.

The report finds that:

Only one state, Rhode Island, includes a role for voters in choosing delegates to a constitutional convention. Indeed, 10 states automatically make politicians, typically legislators or the governor, their convention delegates. 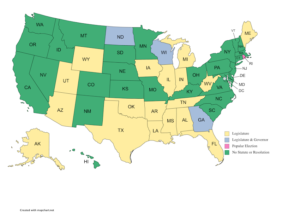 In addition, the right-wing, dark money groups lobbying for a convention take the position that each state would get one vote in the proceeding, like a super-sized U.S. Senate. That approach – already embraced by 15 states in their constitutional convention applications – would give Wyoming the same weight as California in deciding what amendments get proposed for ratification, despite California having about 70 times more people.

And it would give Republicans control over 31 of 50 votes at the convention. Democrats would control only 15 votes, with the remaining four likely split between the parties, the report finds.

This well-kept secret lies behind the enthusiasm for a convention shown by con con leaders like former Sen. Rick Santorum (R-Pa.). “We have the opportunity as a result of that to have a supermajority,” Santorum said at a recent ALEC event, “even though…we may not even be in an absolute majority when it comes to the people who agree with us.”

For America’s reactionary Right, a constitutional convention offers their best shot at locking in minority control for generations to come.

“This report is a real eye-opener,” said David Super, professor of law at Georgetown University.  “It will come as a shock to the many people – left, right, and center – who imagine that a constitutional convention would somehow give We the People a magic Reset button for our democracy.”

“The report shows that moneyed special interest groups and reactionary politicians whose views diverge dramatically from those of most Americans will most likely control any modern-day convention,” Super said.

Proponents’ method of choosing delegates and voting on amendments is not a given, as Article V of the Constitution is silent on the matter. When Congress last debated the issue in the 1970s and 80s, the prevailing view was the opposite: that delegates should be popularly elected, with each delegate getting one vote, the report finds. And prior Supreme Court decisions suggest that Congress has the power to decide.

Nonetheless, Congress has not enacted any legislation on point, and could easily switch gears to embrace whatever set of rules offered the most advantage to the party in control at the time.

“That makes the stakes for who controls Congress after the 2022 midterms extremely high,” said Arn Pearson, CMD’s executive director and author of the report. “Who gets to decide how to rewrite the Constitution could have an even greater impact on the future of this nation than who gets to pick Supreme Court justices.”

Convening the first constitutional convention since 1787 without consensus in advance on the rules would spark a constitutional crisis where the power of  the courts or Congress to intervene is unclear. And the manner in which delegates are chosen for that convention will have a significant impact on its outcome.

Absent prior resolution of these questions, the nation could face the prospect of a convention whose legitimacy is rejected by much of the populace, or even two dueling conventions, each purporting to promulgate amendments to the Constitution.

“Having just escaped a violent insurrection and an illegal scheme to send “alternate” slates of electors to Congress for the 2020 presidential election, that’s a mess this country may not be able to endure,” Pearson said.