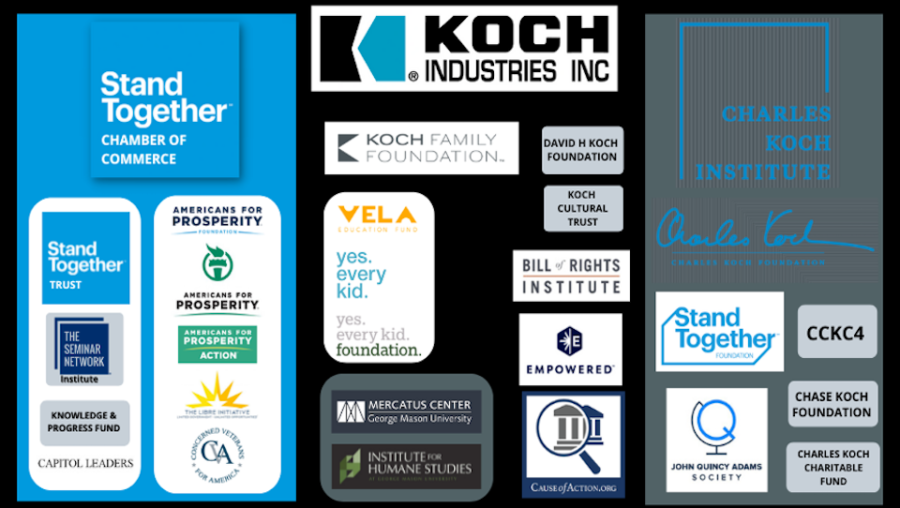 In the 2020 election cycle, 28 organizations controlled by Charles Koch, his family, and Koch Industries executives spent a combined $1.1 billion, primarily to influence public policy and politics in the U.S., and had net revenues of $2.7 billion.

By the end of 2020, the combined assets of these nonprofits totaled $2.8 billion, an increase of $1.5 billion from the beginning of the year.

Other comparably large conservative financiers such as the Bradley, Scaife and Searle foundations show significantly less in net revenue, expenditures, and assets.

These latest figures eclipse the political spending disclosed by Koch Industries, the company that serves as the engine for all Koch-controlled nonprofits. In comparison, Koch Industries spent only $22.4 million on federal lobbying and campaign contributions in the 2020 election cycle.

In order to avoid any double-counting, these net revenue and net expense totals account for all grants and expenses exchanged between Koch-controlled organizations. Those payments can be viewed here:

These calculations likely fail to account for the total policy and political spending overseen by Charles Koch since Koch Industries and a fleet of Koch-controlled limited liability companies (LLCs) do not disclose similar finances. In rare instances of disclosure, Koch Industries and members of the Koch family have been known to invest millions more in policy-influencing organizations.

Despite waning news coverage, Charles Koch’s donor network remains unique in terms of its size and its top-down control by executives of a single company.

Unlike large donor-advised funds that finance a wide array of charities and nonpolitical causes, the bulk of Koch's "Stand Together" cluster of groups has coordinated around election and policy priorities.

Charles Koch's political fleet played a significant role in steering the policy priorities of the Trump administration, due in part to its influence in staffing the former president's cabinet. Even though Koch told reporters he was so displeased with Trump that he might even support Democrats—a rhetorical trick he pulls every few years—the tens of millions of dollars his organizations invested in U.S. Senate and House races went almost exclusively to Republicans.

In addition to showing obvious partisan preferences, Koch has financed groups involved in extremist activity, including the 2021 attack on the U.S. Capitol. In 2022, Koch Industries is still financing many politicians who worked to invalidate the results of the 2020 presidential election, despite signaling to Politico that it would discontinue such support.

This political spending continues to pay off during the Biden presidency. Last year Koch exploited the Democrats' weak majority by undermining the comprehensive climate and infrastructure legislative package known as Build Back Better. The Koch machine also spent heavily to tank the voting and election reform policy known as the For the People Act, despite knowing full well that doing so went against popular sentiment across the political spectrum.

Each of these counterattacks fed into another major priority for Koch: installing radical judges to the U.S. Supreme Court who are willing to do the bidding of the wealthiest people and corporations in the country. His astroturf organization Americans for Prosperity (AFP) spent "seven figures" on efforts to support the confirmations of Trump nominees Neil Gorsuch, Brett Kavanaugh, and Amy Coney-Barrett—for a total price tag of between $3 and $10 million.

This corporate-captured Supreme Court is already delivering victories to the Koch network. The Court supported an attack on IRS donor disclosure rules advanced by the AFP Foundation—the sister group of the organization that supported the confirmations of Gorsuch, Kavanaugh, and Coney-Barrett. Most recently, at the behest of a number of Koch-controlled or Koch-funded organizations and attorneys general, the Court struck down key aspects of the Environmental Protection Agency's climate change mitigation regulations.

The next two articles in this series will explore more about the rapid growth and evolution of Charles Koch's powerful political machine.

For the purposes of this article, "Koch-controlled" specifically means organizations under direct operational control of Charles Koch, his family members, or his fellow executives at Koch Industries. Most of these groups were founded by the Koch family.

Noteworthy groups heavily financed by Koch Industries or governed in part by Koch executives were excluded if they are not operated at the ultimate discretion of Charles Koch, his family, or his company. Among the many groups excluded are the American Legislative Exchange Council (ALEC), the Cato Institute, the Kansas Policy Institute, the Independent Women's Forum, and the American Institute for Economic Research.

Our calculations exclude numerous Koch-controlled LLCs that are part of the network's overall political operations, such as i360 and Stand Together Communications (formerly, In Pursuit Of). Many expenditures to these LLCs are disclosed in the IRS 990 filings of Koch-controlled organizations and super PACs, but given that the revenue and expenditures of the LLCs themselves are undisclosed, those figures have been excluded.

While most of these organizations exist primarily to influence matters of policy or politics, groups such as the Koch Cultural Trust and others are involved in philanthropic activity. Some spending by the Koch Family Foundation (formerly known as the Fred C. and Mary R. Koch Foundation) relates to student scholarships for dependents of Koch company employees. The Stand Together Foundation finances many charities that are not inherently political, but are generally tied to Koch's ideology of limited government and unregulated markets. The Stand Together Foundation was born out of a crisis communications push following Koch’s poor public relations in the 2010s, a topic that will be examined in part three of this series.