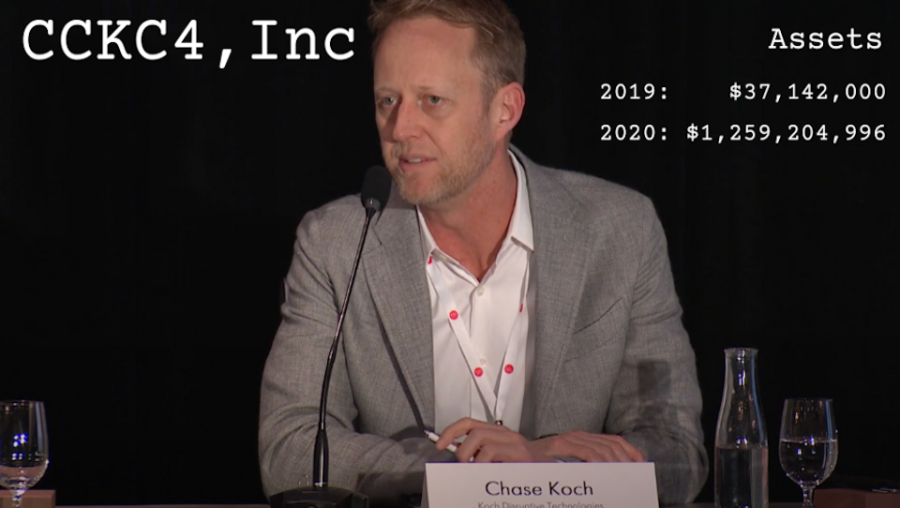 The cash transfer increased CCKC4’s assets from $37 million in 2019 to $1.3 billion at the close of 2020, significantly exceeding the value of the other largest Koch-controlled nonprofits like the Charles Koch Foundation ($462 million) and Charles Koch Institute ($364 million).

CCKC4 presumably stands for “Charles Chase Koch 501(c)(4).” It has no website nor public presence. CCKC4 filed IRS 990s in 2018 and 2019, and received its determination letter confirming its tax-exempt status in May of 2020.

The group lists its purpose simply as “grant-making,” but it has only made two grants since coming into existence. In 2019, CCKC4 gave $10 million to the Charles Koch Foundation, of which Chase is a board member.

Unlike the majority of Koch-controlled 501(c)(3) nonprofits that cannot primarily engage in political activity, CCKC4 is a dark money 501(c)(4) “social welfare” organization that can legally funnel up to half of its spending into political races. This indicates Chase Koch’s continued interest in political influence, contradicting his public relations push as he took on a prominent role at Koch Industries.

The group’s IRS tax filings list the $1.2 billion infusion as unspecified payments from individuals, $953 million of which was in the form of stock and other securities.

“The $1.2 billion funding of CCKC4 makes it one of the largest section 501(c)(4) social welfare organizations and a potential major player in political and policy circles,” said Lloyd Hitoshi Mayer in an email to the Center for Media and Democracy (CMD). Mayer is a law professor at the University of Notre Dame Law School.

The scale of the organization is unusual for a 501(c)(4) organization, but not unprecedented. Professor Mayer compared the organization’s sizable assets to $3.4 billion reported by Fund for Policy Reform in 2019. The Fund is one of many organizations linked to the liberal political financier George Soros.

“The decision by the Koch family and these other billionaires to fund 501(c)(4)s at this level demonstrates the important role that 501(c)(4)s serve as philanthropic and policy vehicles that are not subject to the limits on political activity faced by 501(c)(3) charities,” said Mayer, whose research expertise relates to politically active nonprofit organizations.

“It also demonstrates the importance of an obscure tax law change in 2015 that exempted gifts to 501(c)(4)s from the federal gift tax. Before that statutory change, it was uncertain whether the gift tax applied to such gifts,” Mayer said. “Gifts that exceed the annual gift tax exclusion ($16,000 per recipient as of 2022) generally count toward the exemption amount, and most very wealthy individuals use up the lifetime exemption through gifts to their children and other family members.”

CMD contacted a Koch Industries executive who serves as director of several Koch-controlled nonprofits for comment, but received no response.

Securities and Exchange Commission (SEC) filings indicate the Non-Profit 1888 Feeder-Fund has gross assets exceeding $2.1 billion as of May 2022. It is an asset allocation fund that manages diversified portfolios of investments, registered to operate in the states of Colorado, Delaware, and Kansas.

Professor Mayer noted the possibility that the $125 million sent from CCKC4 to the Nonprofit 1888 Feeder Fund could reflect the value of a specific investment the LLC is managing for CCKC4. “It is common for large investors to make their investments through LLCs that pool funds from multiple investors,” Mayer said.

The Non-Profit 1888 Feeder-Fund is one of several subsidiaries of 1888 Investments, LLC, which reported several key facts in recent SEC filings:

Both 1888 Investments and the Non-Profit 1888 Feeder-Fund are subsidiaries of 1888 Management Fund.

1888 is the year that Charles Koch’s grandfather, Harry Koch, immigrated to the United States. Bloomberg was first to report on the company in 2016:

With little fanfare, the Kochs are building an operation called 1888 Management LLC to manage part of their personal wealth. Initially tucked inside the private Koch Industries Inc.,1888 has been quietly scouting for personal investments for the Kochs, whose money and influence have helped shape the modern conservative movement in the U.S.

The ultimate size of the parent LLC, 1888 Management, is unclear. Bloomberg reported that someone familiar with 1888 Management claimed it was managing over $2 billion in investments.

CCKC4 received $30 million from another Koch-controlled LLC, EFPRP Investments, LLC. The purpose of this transaction is not clear, and little public information exists regarding EFPRP Investments.

The arrangement between nonprofits and LLC’s allows donors to skirt nonprofit disclosure laws and spend more dark money on political causes, both domestic and international. The Koch-funded Philanthropy Roundtable advocates this strategy:

LLCs are not subject to annual distribution requirements; they give donors the latitude to invest in domestic and foreign for-profit ventures; they can be used to fund ballot initiatives, direct lobbying, political campaigns, and individual candidates; and they can be used to support foreign charities without the requirement imposed on private foundations to determine that prospective foreign grantees are the equivalents of Section 501c3 public charities.

The next article in this series will examine one large grant that CCKC4 made to an independent donor advised fund, which the Koch network appears to be using to further obscure its spending.