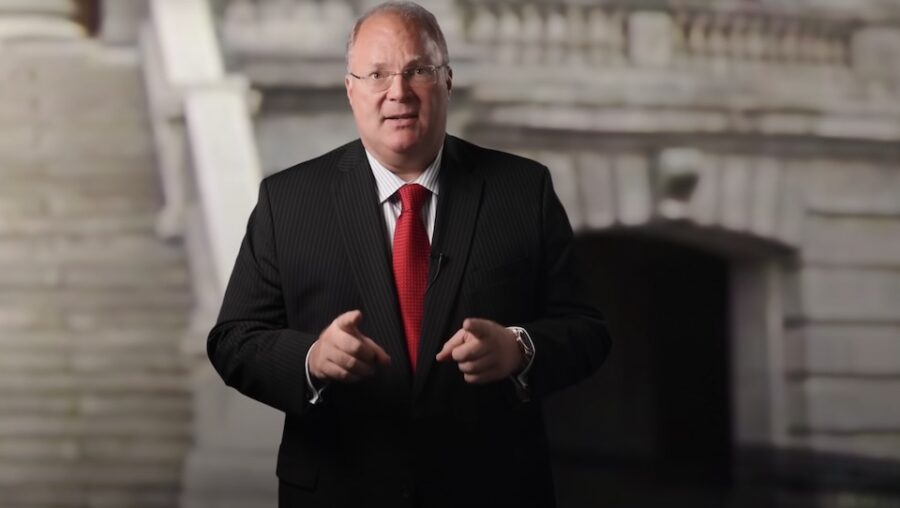 This piece was written and published by American Oversight on September 2 here.

Days after being fired as head of the Wisconsin Assembly’s partisan investigation of the state’s 2020 election, Michael Gableman had listed as his new employer the Thomas More Society, a conservative legal organization that was involved in various efforts to cast doubt on the election’s results.

The Thomas More Society, which has for years also fought for more restrictions on abortion rights, had been mentioned in conjunction with the investigation at various points, including — as revealed in public records obtained by American Oversight — for having subleased office space from Gableman. Prior to his termination by Speaker Robin Vos on Aug. 12, Gableman, as head of the Assembly’s Office of Special Counsel (OSC), pushed false allegations of widespread voter fraud, called for local mayors and election officials to be jailed, and voiced support for the legally impossible proposal to “decertify” the state’s 2020 election results.

Gableman’s newly announced employment with the Thomas More Society raises serious questions about the extent of the group’s involvement in the inquiry. In its investigation of OSC’s review, American Oversight obtained several documents that shed light on the group’s influence over Gableman’s work, as well as that of other outside groups and legal activists that had also worked to sow distrust of the 2020 election’s integrity — or to overturn the results.

The Thomas More Society and Other Outside Groups and Activists

The Thomas More Society is the parent organization of the Amistad Project, which bills itself as an election integrity project. Following the 2020 election, the Amistad Project played a role in the coordinated, multi-state effort to submit to Congress false electoral slates in support of Donald Trump. Erick Kaardal, a conservative lawyer and special counsel to the Thomas More Society, represented both that group and the Amistad Project in several lawsuits challenging the results of the 2020 election in Wisconsin and other states, and public records revealed that his Minneapolis law firm, Mohrman, Kaardal, & Erickson, also subleased office space from Gableman’s review.

Kaardal also brought several lawsuits alleging issues with Wisconsin’s 2020 election, including a September 2020 case brought by the Wisconsin Voter Alliance (WVA) challenging election administration grants given to Wisconsin’s five largest cities. That December, Kaardal filed a lawsuit against Vice President Mike Pence on behalf of WVA and other plaintiffs, an effort to prevent Pence from allowing Congress to certify the correct election results on Jan. 6, 2021. The federal judge in that case later referred Kaardal for an ethics inquiry for filing a “sweeping complaint filled with baseless fraud allegations.”

In August 2021, Kaardal represented WVA, Wisconsin Rep. Janel Brandtjen, and the conservative Wisconsin group HOT Government in a lawsuit against the Wisconsin Elections Commission (WEC) that alleged misconduct in its administration of the 2020 election. Brandtjen chairs the State Assembly’s elections committee and is a vocal proponent of Trump’s stolen-election lies, having pushed for a fuller review of Wisconsin’s 2020 results than the investigation authorized by Vos. Harry Wait, the head of HOT Government, has been criminally charged for having requested multiple mail-in ballots in the names of other voters, which he said he did to expose the ease of committing fraud.

In November 2021, OSC employee Zak Niemierowicz said that Ron Heuer, the president of WVA, was one of five staff members working for the review. The next month, Gableman publicly revealed the names of most OSC employees for the first time, including Heuer and Gary Wait, a brother of Harry Wait and a retired private detective. Records obtained by American Oversight that same month showed that Harry Wait was in touch with OSC’s review since at least the summer of 2021, and an OSC email from October said that he was “helping us with the Racine investigation.” Other records obtained by American Oversight include an unsigned contract between OSC and Heuer that states his work for the Assembly would include “reporting and working directly with Phill Kline,” the president of the Amistad Project.

Gableman was hired to lead the Wisconsin Assembly’s 2020 election review in July 2021. He performed little substantive work during his first few months, later testifying in American Oversight’s lawsuit for records that, during that time, he “did not have a very sophisticated or intricate understanding” of election processes. Through the course of American Oversight’s investigation of OSC’s work, we have obtained numerous documents that point to the involvement of the Thomas More Society, Kaardal, and other outside groups active in elevating the Big Lie.

Public reporting as well as other records released through American Oversight’s litigation show that Kaardal directly assisted Gableman with aspects of the review, although there is no evidence of any official contract between Kaardal and Gableman or OSC. Emails suggest Kaardal participated in OSC calls as early as October 2021, and he and other associates of the Thomas More were in contact with Gableman and Brandtjen months prior.

Earlier that year, Kaardal was the featured speaker at an invitation-only hearing before Brandtjen’s committee, during which he discussed his lawsuits challenging the election administration grants. In April 2021, Kaardal emailed a file called “Racine WI documents” to Kline and Luis Cornelio, an associate of the Thomas More Society, then sent the email to Brandtjen. Records later posted on OSC’s website in response to American Oversight’s litigation included more evidence of contact between OSC and the Thomas More Society, including an email sent from the personal account of Jordan Moskowitz, the data and political director for the Wisconsin Republican Party, to Cornelio on Sept. 1, 2021, titled “Meeting with Justice Gableman.”

In October, Kaardal’s firm helped draft subpoenas seeking information on election administration grants from local Wisconsin officials, according to other records obtained by American Oversight. Similar subpoenas were issued by OSC in January 2022.

Also in October, Kaardal emailed Gableman to suggest that he hire the president of the public relations firm handling the Thomas More Society’s media requests, saying that he was “ready to discuss a PR role for the Office of Special Counsel.”

In March 2022, Gableman presented OSC’s “Second Interim Investigative Report” on its findings before Brandtjen’s committee. Kaardal appeared beside Gableman during the presentation, which featured a video of Kaardal interviewing his clients — residents of long-term care facilities — about how they voted in 2020. Emails later posted to the review’s website show that Kaardal had drafted portions of that report, which floated the (legally impossible) action of “decertifying” the state’s 2020 election results. Another email posted to the review’s website suggests that the Thomas More Society had edited the video content for OSC.

Following Gableman’s presentation, Kaardal and Brandtjen both spoke at a Thomas More Society news conference, where they alleged that Wisconsin election officials had broken the law while administrating the 2020 election and again voiced support for overturning the results. That news conference was introduced by Heuer, who said that WVA had begun working with the Thomas More Society on an “investigation,” which was how he was introduced to Brandtjen.

On Aug. 17, 2022, WVA announced in an online post written by Heuer that Niemierowicz had begun working as an “administrator” for the organization. Heuer also wrote that he “had actually recruited [Niemierowicz] to work in the Office of the Special Counsel to work with Mike Gableman.”

You can read more about American Oversight’s investigation of Gableman’s election review here, including their findings on the inquiry’s taxpayer-funded expenses and its poor record-keeping practices.